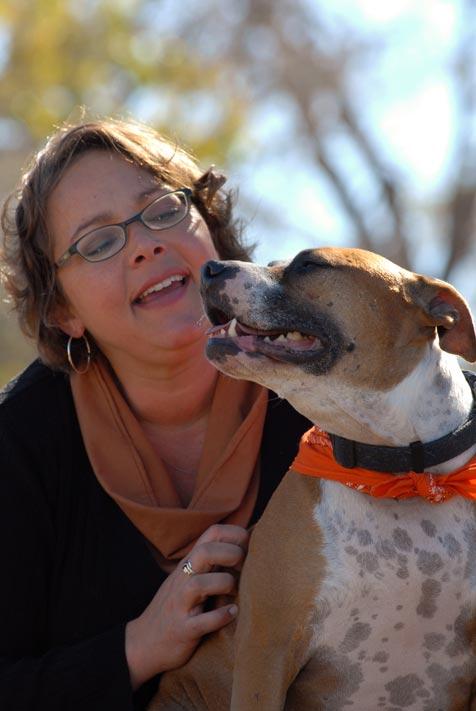 The two-hour season premier of National Geographic Channel’s series "DogTown" touched on the subject of breed-specific legislation, or breed bans, ordinances that ban dogs from cities and towns simply because they’re a certain breed.

As one of our initiatives, Best Friends is working to bring an end to breed bans that hurt responsible owners and their pets, and replace them with laws that hold owners accountable and focus on prevention. Best Friends has been successful in getting some cities and towns, including Cedar City, Utah, and Coeur d’Alene, Idaho, to drop their plans to institute breed bans and adopt versions of the Best Friends Model Dangerous Dog Ordinance instead.

And most recently, Best Friends helped save the life of a pit bull named Forrest, who had been picked up by animal control officers in Denver, Colorado, a city that bans pit bulls. Best Friends negotiated with city officials to allow Forrest to be transported to St. Louis, Missouri, where he now lives with a volunteer with Stray Rescue, a no-kill animal rescue organization.

The story below describes the situation in Denver today and the consequences of breed bans versus dangerous dog ordinances.

A pitbull in Denver

It was 4:30 in the morning and still dark outside in Denver, Colorado. Sonya Dias put Gryffindor’s leash on and, oh so quietly, they stepped out the front door of her turn-of-the-century loft.

It was the only safe time Sonya could walk Gryffindor – "Gryffie" for short – an adorable young pit bull she’d rescued the year before when she found him chained to a backyard fence in a city down south. His scars and knocked-in teeth led her to believe he might have been used as a bait dog to train fighting dogs. She talked his owners into selling him to her and brought him home to Denver, where she gave him a brand new life filled with love, hugs, warm blankets and treats.

Life was good for Sonya and Gryffie, that is, until May 2005, when Denver reinstituted its Draconian pit bull ban, an ordinance banning American pit bull terriers, American Staffordshire terriers, Staffordshire bull terriers and other dogs who display the majority of physical traits of any one or more of those breeds. The very day that Denver reinstituted its breed ban, Sonya called her real estate agent and put her condo on the market. But it didn’t sell overnight, so she and Gryffie went into hiding. She panicked every time her doorbell rang.

After all, it wasn’t unusual for an animal control officer to knock on a pit bull owner’s door and simply cart their four-legged family member away. Sonya was not going to take the chance of Gryffie ending up on "Pit Bull Row," where thousands of dogs had ended up since 1989 when Denver first put its breed ban into place. These dogs were euthanized not because of anything they’d done, but simply because of what they looked like. One Colorado pit bull owner called Denver’s breed ban "the racial profiling of dogs."

Sonya’s condo did eventually sell and she and Gryffie moved to another Colorado city where Gryffie was still welcome. And Sonya became a tireless advocate for responsible pit bull owners, starting a group called the Pit Bull BAND (Breed Awareness, Not Discrimination), and becoming one of the plaintiffs in a lawsuit challenging Denver’s breed ban.

"I think when people think of breed ban, they think that means you just can’t have that breed of dog in town," Sonya says. "But a ban manifests itself in the government knocking on people’s doors and taking their well-cared for, well-loved, four-legged family members and killing them. Sadly, that is not hyperbole, but reality."

When it comes to breed bans, or breed-specific legislation, Denver is not alone. Denver is just one of a number of places across the country that have banned or placed severe restrictions on certain breeds of dogs. Though the bully breeds are most often the victims of breed bans and restrictions, more than 20 other breeds of dogs have been targeted as well.

Breed bans usually come on the heels of a fatal dog attack, a knee-jerk reaction by city and county officials that might pacify a community for a while, but don’t do a thing to keep communities safer. It’s much easier to institute breed bans than to look at what caused those attacks.

Delise examined fatal dog attacks that occurred over four decades and found some critical common factors. Owners of dogs who killed had failed to humanely control their dogs and had often abused or neglected them, keeping them chained or allowing them to run loose. Children were often left unsupervised around unfamiliar dogs. Unneutered and unspayed dogs, who are more likely to roam, were overwhelmingly represented in those fatal attacks.

Denver’s war on pit bulls began one autumn day in 1986 when three-year-old Fernando Salazar wandered away from his home in southwest Denver and came upon an unspayed female pit bull chained underneath a neighbor’s carport. The dog killed him. Just three years before, another one of the neighbor’s dogs had seriously injured an eight-year-old boy. Had Denver had a strongly enforced dangerous dog ordinance in place, such as Best Friends’ Model Dangerous Dog Ordinance, an ordinance that encourages responsible dog ownership, works to prevent bites before they happen, and holds owners accountable for the actions of their dogs, no matter what their breed, Fernando Salazar would probably be alive today.

In addition to being ineffective, dog breed bans are also expensive. Calculate how much such a ban would cost your community.

Photos of Gryffie and Sonya by Molly Wald