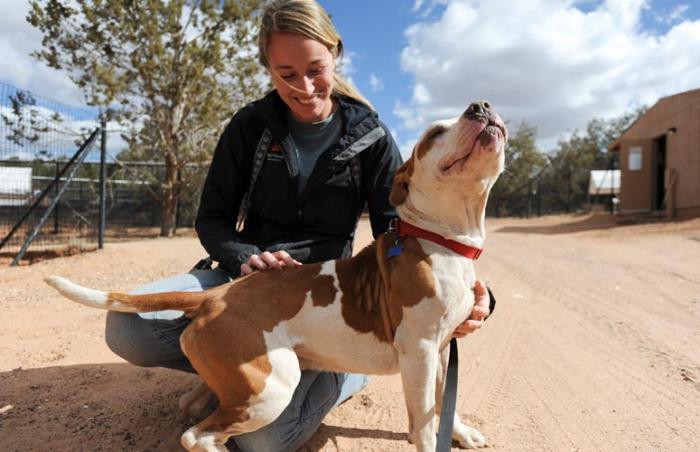 Anton and Hoagie may not understand the distinction of earning a bachelor’s degree with honors. Or even have a clue about the benefits of shelter dog training, for that matter. They’re both definitely more interested in treats and toys than diplomas. But these two dogs now have CLASS, which means they’ve got a whole new set of social skills to help them become happier and more adoptable.

Canine Life and Social Skills (CLASS) is a training program that uses positive reinforcement to teach dogs good manners and strengthen bonds with their caregivers. The program has three levels (bachelor’s, master’s, and doctorate) and teaches skills that dogs need to be happy and successful in a home environment. That translates to helping dogs like Anton and Hoagie get adopted more quickly and, once they do, ensures that they stay in their new home. 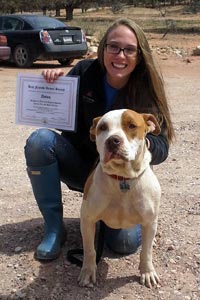 A charming boy with big gold eyes, Anton was the perfect candidate for extra training because he loves people and is very eager to please. But he needed some work on manners, particularly when it came to calming and controlling himself. Suffering from anxiety, he wanted to be around people all the time. Then he would rush the door whenever people left his room.

In order to earn his bachelor’s degree, Anton had to learn to be more patient. He now waits at the door, instead of bursting through it. He also knows how to walk on a loose leash, to stay and to settle (lie calmly in a down position for a minute). And he earned his degree with honors by performing two additional tricks for the test - giving his paw and doing a high ten.

“CLASS helped him blossom and made him happier,” says Danielle Larkin, the Dogtown caregiver who worked with Anton. But this dog and caregiver team isn’t stopping there. Anton is now “studying” toward his master’s degree, which includes working on staying with more distractions and getting better at “leave it.” That’s challenging because, Danielle explains, “He has a nose like a bassett hound and likes to investigate.”

Hoagie the dog earns his degree, too 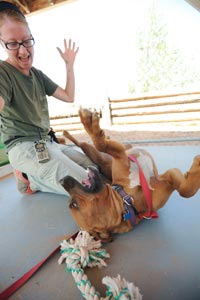 Hoagie, a six-year-old former shelter dog, also has difficulty with “leave it.” In order to pass that section of the test, as well as the “give and take” portion, Hoagie practiced extra hard with his caregiver, Erica Stoveken. That’s because he used to guard his toys, particularly high value items like rawhide chews and bully sticks.

On the day of the test, Hoagie took a rawhide and, happily, began chewing it. Then Erica showed Hoagie a fluffy, stuffed duck and asked him to “give.” Tempted by the duck, he allowed Erica to take the rawhide, thus passing his test. And, like Anton, he performed two bonus tricks to earn his bachelor’s degree with honors.

Since “graduation,” Hoagie has started going on sleepovers and is well on his way to becoming one of Dogtown's most coveted overnight dogs. He’s now a happier, more easygoing Hoagie, which means a more adoptable Hoagie, too.

The success of the CLASS program points toward a future when more dogs will follow in the footsteps of Anton and Hoagie, earning prestigious degrees by learning important life skills.