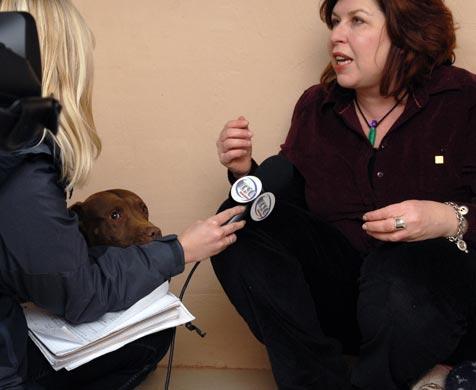 You should have seen the crowd. The dogs who came from former NFL quarterback Michael Vick’s estate were celebrities for a day as reporters filed into Best Friends to see how the dogs were settling into the sanctuary. One thing’s for sure: If anyone had expected to meet a bunch of mean dogs, they were in for a surprise.

Eight television crews and four newspaper crews came to Best Friends to get a first-hand look at what we’re calling the Vicktory dogs. The dogs didn’t care one stitch about being on the news. They just saw a chance to make new friends. "Nice camera you got there, pal. Now how about a scratch behind the ears?"

Take Lucas, for example. Lucas was one of the grand champion dogs in his former days as a fighter. He has scars all over his big, muscular body. But there isn’t a bigger love mush in the world than this gentle giant. His favorite pastime is to perch on top of his doghouse on the lookout for visitors. When a visitor comes close, he jumps up there and says hello. "Hey, don’t forget about me!"

And don’t worry; Lucas got all the reporters’ attention today. Once the news crews started snapping pictures, Lucas played the hambone role to perfection. Patty Hegwood, Best Friends Animal Care Director, said Lucas looked like he was preparing to receive an Olympic medal. So proud! Always sticking out his chest and posing this way and that for the snapshots.

In another story, one of the reporters was a bit nervous seeing Ellen the pitbull for the first time. Ellen also has a lot of scars on her face. It didn’t take long, though, for the reporter to have a change of heart. Ellen started taking treats right from her hand. Then, Ellen would smush her face over and over in the reporter’s hand for love and pets. By the end of the interview, Ellen had made a brand new friend in the reporter. These dogs have a knack for doing that. For winning people over.

One more hit of the hour was Willie. Willie harbors a secret belief deep within that he’s really a lapdog. When Patty was talking with the news folks, Willie kept crawling in her lap for attention. Never mind that whole interview thing, Willie wanted some love!

All in all, the event was a big success, as far as the dogs were concerned. The reporters got to meet some of the friendliest dogs this side of anywhere, and the dogs, well… to them it was just another opportunity to shine.