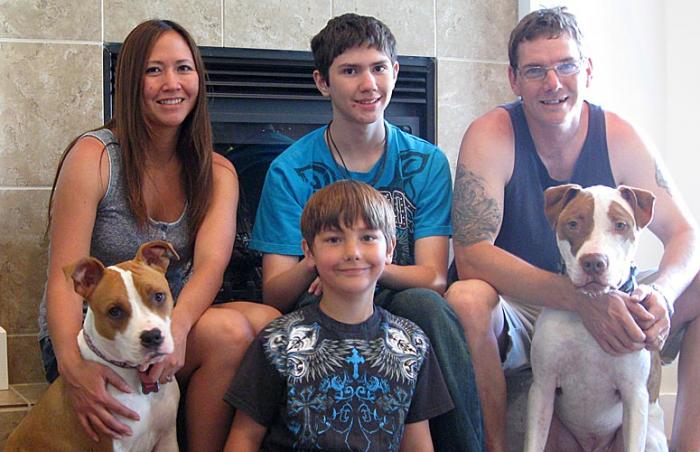 Family reunited with their lost dog

Nekoda is no stranger to twists of fate. He went from a beloved family dog, to down-on-his-luck stray, to Dogtown dog and then back into the loving arms of his family. His incredible story began when he was found roaming the streets in a community near the Sanctuary. Animal Control contacted Best Friends, and Nekoda, dubbed “Baloo” by his caregivers, came to live at Dogtown.

Family searching for their dog

During the eight months he spent at the Sanctuary, Nekoda/Baloo had no idea that his family was desperately searching for him. He was just happy to be in a safe place where people cared for him. But he had difficulty coping with all of the changes in his life. He was anxious and had a hard time making new doggy friends.

Dogtown caregivers created a calm and reassuring atmosphere for him, but he was clearly missing his family and craving a more homelike setting. So he began spending time in one of the Sanctuary offices, which seemed to ease his anxiety. 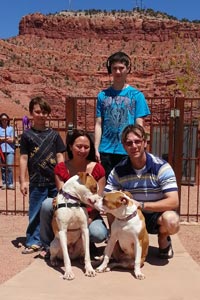 Meanwhile, the Whitus family – Sheryl, John, and their two sons – were still searching for Nekoda after having been separated from him for nearly a year. It happened when the family made a difficult, 600-mile move and entrusted Nekoda to a friend during their transition. They had every intention of coming back for Nekoda once they were settled in pet-friendly housing. But suddenly that friend – and Nekoda – disappeared.

Heartbroken, the family began combing through Petfinder and shelter websites hoping that their beloved pet would turn up somewhere. In the middle of their search, they fell in love with, and adopted, a pit bull terrier named Lily. But they never gave up the hope that one day they would find Nekoda. Finally, Sheryl found a picture of “Baloo” on Petfinder and immediately contacted adoption specialists at the Sanctuary, convinced that Nekoda/Baloo was the same dog.

Sheryl sent pictures of Nekoda, Dogtown caregiver Jacquie Bushway-Speer printed them out and held them up beside Baloo. It was the perfect match, right down to the unique Q-shaped marking above one of his eyes. But there was more.  As soon as Jacquie called him “Nekoda,” it was as if he sighed in relief and said: “Finally you know who I am!” 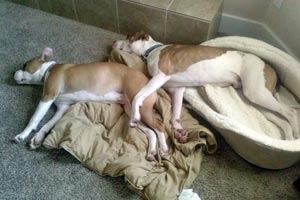 The Whitus family members immediately planned a one-day trip from Boise, Idaho, to Kanab so they could introduce Nekoda to his new sister, Lily, and bring him home. Baloo’s caregivers and Dogtown trainers brought him to a dog park for the reunion. That way, both dogs would be on neutral territory and have the best chance for a safe and successful introduction. It turned out to be more than successful, as the two dogs hit it off instantly. “It was like Baloo knew Lily was going to be his sister,” Jacquie says.

Happy reunion with their lost dog

As for his people, when the second John called his name, Nekoda lit up – racing and bouncing around happily. Everyone who had known “Baloo” at the Sanctuary was thrilled to see him so excited to be back with his family.

After the emotional reunion, the family made the long trek home. But that happy glow hasn’t left them.

As Sheryl says:  “After being apart for a year, we are so excited to be back together with our beloved boy, Nekoda. The reunion with has been a great testament to what it’s like to bond with your family pet. We all have fallen right back into the groove of being a complete family again. We feel very fortunate to have found him and look forward to the many years we have ahead of us!”

Photos courtesy of the Whitus family