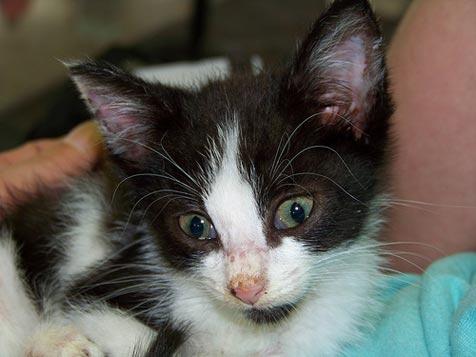 It’s not very often that losing a leg can be counted as the least of someone’s worries. But Trio the kitten had so many problems going on that the three-legged thing was barely worth batting an eyelash over. Here’s why this little guy is counting himself one lucky cat.

A group from Best Friends was out in Randolph, Iowa, educating and training the townspeople in trap/neuter/return (TNR). After finishing up their work in Randolph, they continued over in nearby Shenandoah, Iowa. While there, they found a trailer park that needed some serious help.

Cats and kittens were running loose everywhere. Many were in bad shape. The Best Friends team trapped what ferals they could for spay or neuter. When it was time to leave, however, a little black and white ball of fluff came barreling down a driveway straight toward them. The ball of fluff turned out to be a feral kitten who probably hadn’t seen them at first. Because once he did, Trio (as they named him) turned right around and ducked under a couch.

When they finally caught up with him, they knew right away that he was not exactly living the high life. Trio had goopy eyes, he was super skinny, he was covered in fleas, his ears were full of mites, and he ended up having roundworm and hookworm. That missing back leg really was the least of his worries. There was no open cut or sore or anything, so it’s possible he was born without the leg.

Everything else, though, was a mess. When the vets first met him, in fact, they couldn’t believe the little fighter was still alive. Trio was too small to neuter, and the Best Friends team knew he couldn’t survive much longer out there on his own. So they checked back with the sanctuary to see if any room was available. Turns out there was.

Trio now has his own private suite at the kitten part of the sanctuary. He’ll live alone until he gets the medical all-clear. In only a few days, he’s come a long way—not just with his health, but in his outlook on life. People bring food, he’s discovered. People scratch him under the chin. People are worth keeping around! Now he loves hanging out with his caregivers.

A brighter future for a fighter kitten

He sure showed up at the right place at the right time. Too much later and he wouldn’t have made it. Now all he has to do is play out that lucky streak one more time to snare the perfect home. With all he’s gone through, that should be a piece of catnip cake!

Photos of Trio and Shelly Kotter by Shannon Riddle

The work of Best Friends, including saving kittens like Trio, is made possible through your support. Thank you!