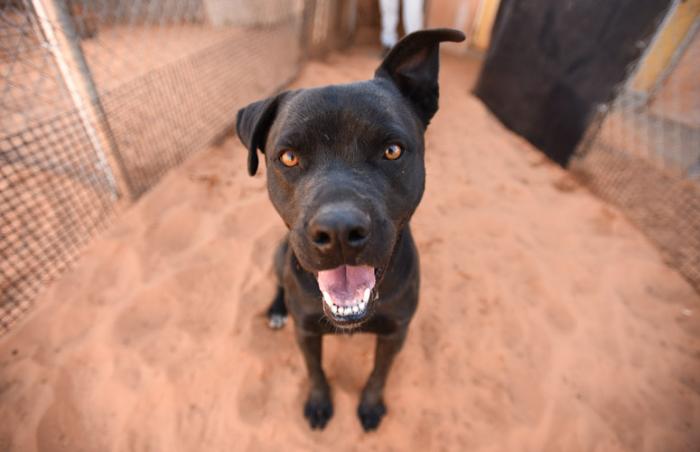 Like a cat chasing a feather toy, Fillmore the high-energy pit bull mix dog leaps after the ball on the end of the cord and pounces, nearly catching it. When it bounces away along the sand, Fillmore stays in hot pursuit, kicking up clouds of red dirt as he changes directions.

One second his nose is on the ground; the next second his head is held high as he leaps through the air in the opposite direction, his prize just inches away. Eventually he catches it, shakes it, and chews on it for a little bit before dropping it when his caregiver asks him to. Then his tongue lolls out and he pants — happy and proud of himself for winning the game. 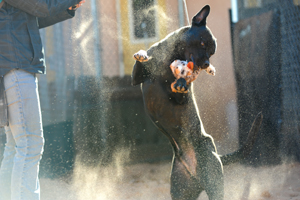 Fillmore’s personality practically bursts at the seams, and the game he gets to play is a way for him to have all the fun he wants, in a way that’s fun for the people in his life, too. And that’s a big change for him. In the past, Fillmore’s way of saying hi was what came naturally to him — leaps and bounds of joy, and paws, and sometimes even teeth. No one wanted to quell his love for life, so his trainers and caregivers had to figure out a way he could get out all that enthusiasm without leaving paw and tooth marks all over the humans he loves.

The solution turned out to be a simple training tool called a flirt pole. It’s a stick with a long, stretchy bungee cord attached to it, with a toy on the end. With the flirt pole Fillmore thinks he’s just playing a fun game, but it actually teaches him an important lesson. Trainers get him to figure out that dropping a toy is the way to keep the fun going.

Dogtown trainer Cherie Mascis explains: “We teach ‘take it,’ saying that as we hand the dog the toy, then get him riled up by playing, and then stop playing. Most dogs quickly learn that play doesn't continue until they drop the toy.”

Calming down an energetic dog 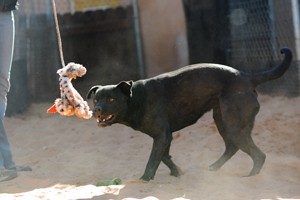 Ten minutes of play with the toy makes Fillmore a happy guy. A sleek black dog from the tip of his nose to the end of his tail, Fillmore is more of a muddy reddish-brown after his flirt pole session. His yard looks a bit chewed up, too. There’s a big circular groove in the sand where, only a minute ago, he was running to and fro as fast as he can. But cleanup couldn’t be easier. Fillmore shakes himself off and, as he walks over it, the sand is already falling back into place.

Young and full of energy after a few minutes with his new favorite toy, Fillmore is calm, satisfied and focused enough for a training session to learn something else, or to go for a stroll along Dogtown’s sandy trails. No more jumping up, no more teeth, and everyone is happy. Most important of all, Fillmore is happy.