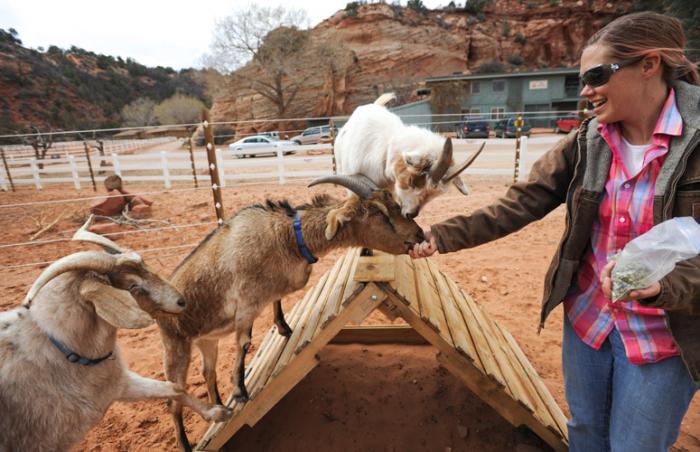 As caregiver Rosalie Wind walks through the goat barn in Horse Haven, more than half the 11 goats who live there are following her. A few are trailing far behind, but Pan, an adorable dwarf goat, and his larger Nubian buddies, Jordan and Steve, are crowded in closely around her. 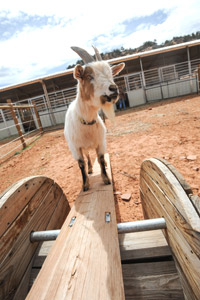 They watch Rosalie for signals and wait for treats. Pan, Jordan and Steve are clicker-trained. (When an animal does what is asked, a trainer uses a device to make a clicking sound and immediately follows it with a treat to let the animal know that he’s done the right thing.) The goats have been learning some neat new tricks lately. On the other side of the horse barn in a large dirt ring is an agility course, a sort of “jungle gym” designed especially for them. Rosalie and the rest of the Horse Haven team salvaged recyclable materials, and with a little construction knowledge and a lot of creativity, turned wooden pallets, empty electrical spools and two-by-fours into a jungle gym for the goats.

It didn’t take long for the goats to figure out that playing on the agility course was both fun and rewarding. Pan, for one, has it down pat. As soon as Rosalie reaches the arena, he immediately breaks from the small crowd and leaps up onto an A-frame built out of pallets. Rosalie clicks and gives him a treat, but he isn’t done showing off his skills yet. He begins walking backwards on the narrow top beam of the frame, carefully placing one trim hoof directly behind the other. 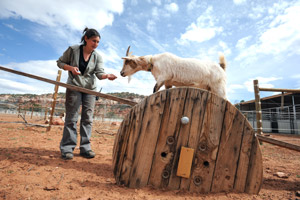 “He’s so smart, and keeps offering new behaviors,” Rosalie says. “It’s cool to see just how trainable these guys are.” The agility course – still in its beginning phases – is a great way to take the natural climbing behaviors of goats to the next level. And it’s fantastic mental stimulation as well, because the obstacles really cause the goats to think; they’re extra willing to put their minds to good use when there’s a treat in store for them, too.

Pan already knows the course by heart, and he soon reaches the last obstacle, a teeter-totter made out of electrical spool and a two-by-four. Part of the spool is buried in the ground for extra stability, so the little goat can walk back and forth on it without feeling unstable. And walk back and forth he does. Once he’s finished with that, he’ll either race Rosalie back to the beginning of the course and start over, or look to her for further direction.

Learning from one another

Though Pan is the most advanced agility trainee, Jordan and Steve aren’t far behind. In fact, they’re learning from watching their agile little friend. “It’s like ‘monkey see, monkey do,’ ” Rosalie says. And Pan, Jordan and Steve are all acting as role models for other curious goats who want to join in on the fun. Aside from exercise and keeping the goats thinking and happy, the agility training keeps goats interacting and playing with people. And nothing is more endearing to potential adopters than smart, friendly, agile goats living up to their full potential.

Update: Though Pan has a pending adoption, Jordan and Steve are still available for adoption.

Learn more about the goats and other residents of Horse Haven