When Monique arrived at the Palm Valley Animal Center in Edinburg, Texas, she was just a tiny puppy whose life had barely begun. In her first few weeks in the world, she’d lost her home and ended up in one of the country’s busiest shelters, one that takes in a staggering 32,000 pets every year (an average of almost 90 pets a day). Monique looked just as overwhelmed, dejected and lonely as any young one might feel in a strange place, separated from her family. The only comfort she seemed to find was curling up in her metal food bowl. 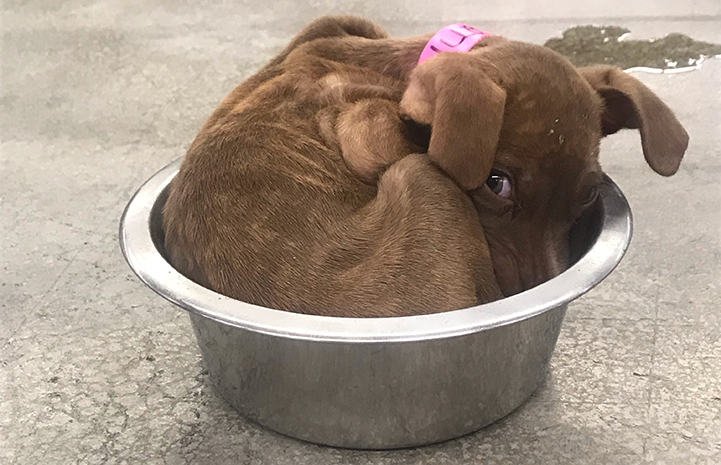 Monique’s life could have been painfully short, and it nearly was. Palm Valley Animal Center has the largest lifesaving gap in the state of Texas. That means an average of 44 animals are killed there every day, due to lack of space. But since the shelter has asked for help, Best Friends has been working hard the past several months alongside staffers to save more lives. Monique was one of those.

In addition to revamping the shelter’s programs, Best Friends is working to transport 800 dogs and puppies out of the shelter to Best Friends’ network partners across the country who have space to take in more animals and can help find them new homes. That’s how Monique was moved out of the shelter and into a warehouse space where dogs and puppies await placement and transport. Because Best Friends has sent staff from all areas of the organization to help with the project, Monique met dozens of different people during her stay. And it’s safe to say she stole the hearts of everyone around her.

In the many photos and videos shared by staff, you can see her go from dejected to a sweet, sassy, happy little puppy. Best of all, she’s now safe and sound at Portsmouth Humane Society in Virginia, where she’ll likely be adopted just in time for the holidays.

Puppy goes from sad to sassy

Monique became a staff favorite the moment she arrived at the transport area. Watching her curl her tiny body into her food bowl moved staff to provide her with her own pink crate and blanket. She also got her first toy, which she loved instantly.

Once she started to feel better and get more comfortable, Monique’s personality began to emerge. And what a personality it is! She may be scrawny, but she’s got a larger-than-life attitude. She became known for her one-of-a kind puppy bark and constantly wagging tail.

It was the arrival Best Friends marketing staff that marked another turning point in Monique’s life. After spending the day working at the shelter and in the transport area, Kayla Zakel, national marketing senior specialist, got the green light to spring the puppy from her kennel and bring her back to the pet-friendly hotel where she and colleagues were staying. 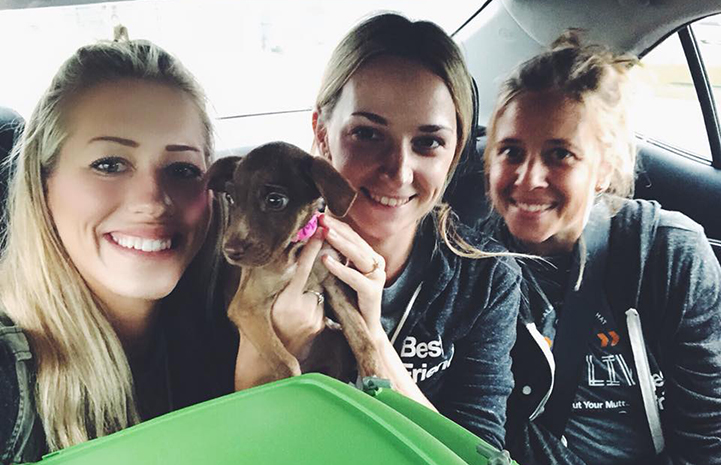 We’re not sure what Monique’s first few weeks of life were like before she ended up at the shelter. But it’s a safe bet that she probably had never stayed in a hotel. For weeks, she’d been one of hundreds of animals in a hectic environment, and now she was the one-and-only four-legged guest in the room.

Her temporary foster moms got to work, giving Monique a bath and trimming her nails — her first-ever spa treatments. 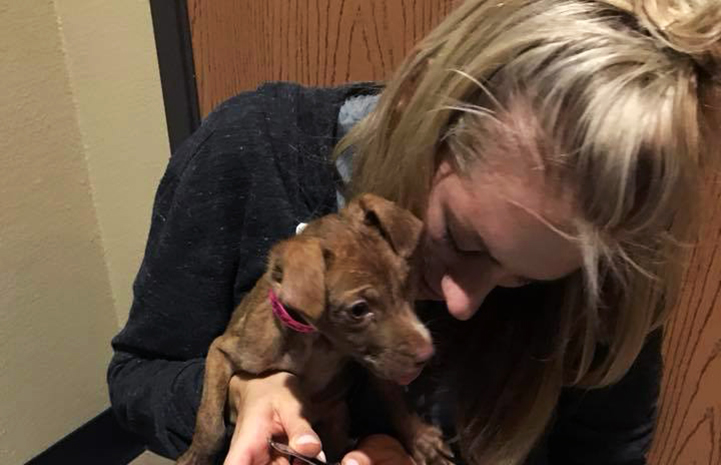 After thoroughly exploring the room, discovering her reflection on the refrigerator door and eating a hearty dinner, Monique ended her day with another first. She got to snuggle up in bed under the covers, next to Kayla.

For the next several days, Monique became an unofficial mascot, sitting in on meetings where everyone took turns holding her. She got another toy of her very own and a pink sweater that seemed made for her — complete with a ruffled neck and faux pearls. 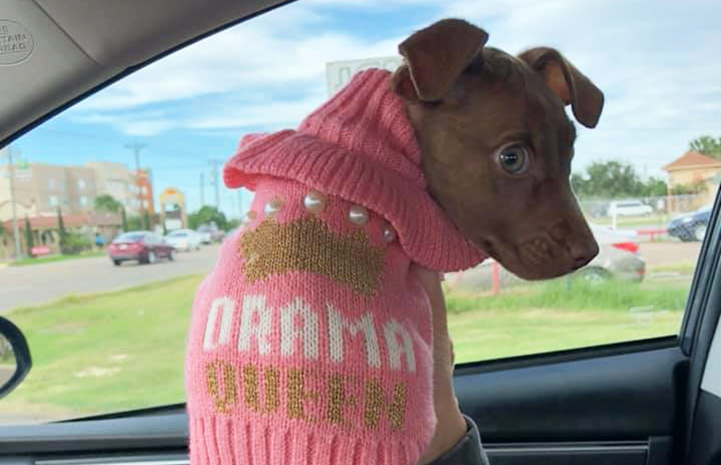 Then came the big day everyone had been waiting for. Monique would be joining other dogs and puppies for a ride across the country to a community where puppies don’t face the same challenges as those in Edinburg, Texas. Through our network partners, Best Friends has been reaching out to identify shelters and rescue groups eager to take in puppies and the kinds of dogs flooding the Edinburg shelter.

Jay Garrett, one of two Best Friends staff members working at the Palm Valley Animal Center (PVAC), says: “Puppies like Monique arrive at PVAC every single day. We also receive large numbers of orphaned, sick and malnourished puppies. Without rescue organizations willing to step up and save these vulnerable puppies, they could face a short and sad life — without happy endings like Monique.”

In different parts of the country, puppies like Monique can get adopted almost immediately because there’s a huge demand and not many puppies in shelters. It’s just a matter of getting the dogs and puppies to them. So, Kayla helped little Monique board the “rescue express” bus for the Portsmouth Humane Society in Virginia. 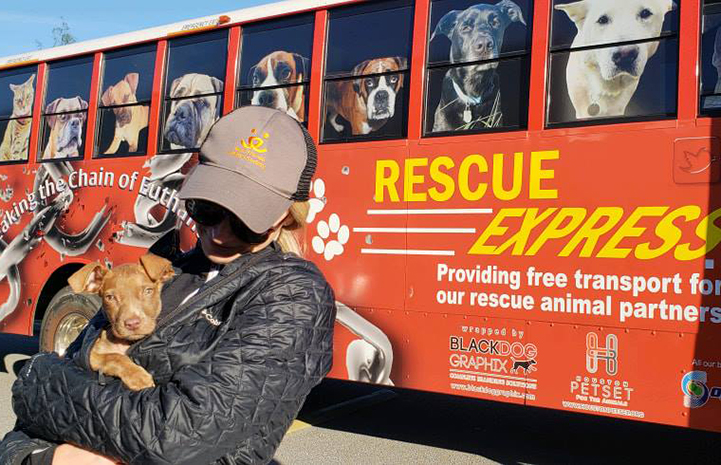 For Monique, the trip was another milestone — her first cross-country trip. She and her fellow canine travelers made it safely to their destinations, and Monique received the kind of attention she’d become accustomed to. The Portsmouth staff, fully briefed on their new addition, had a special area befitting a puppy princess ready for their tiny charge.

When Monique got off the bus, a suite with pink blankets and pink princess bowls awaited her. She couldn’t stop wagging her tail. 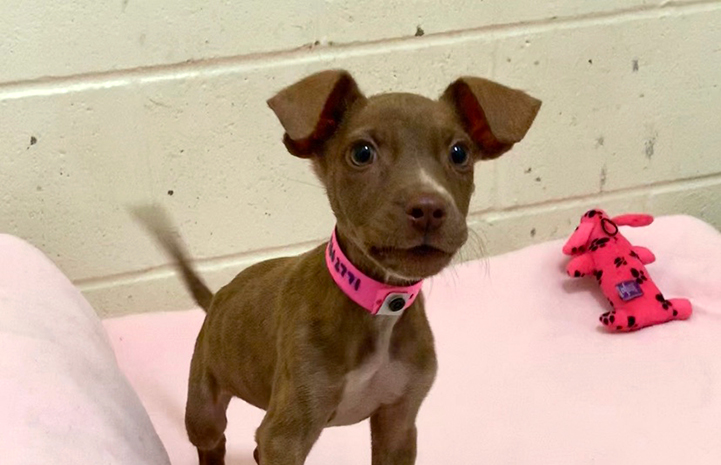 Monique will soon be available for adoption, and it’s safe to say that she’ll be settled in her very own home in time for Christmas. Then she’ll get to know the joy of another milestone — her first day in a forever home.

Give a gift and save a life