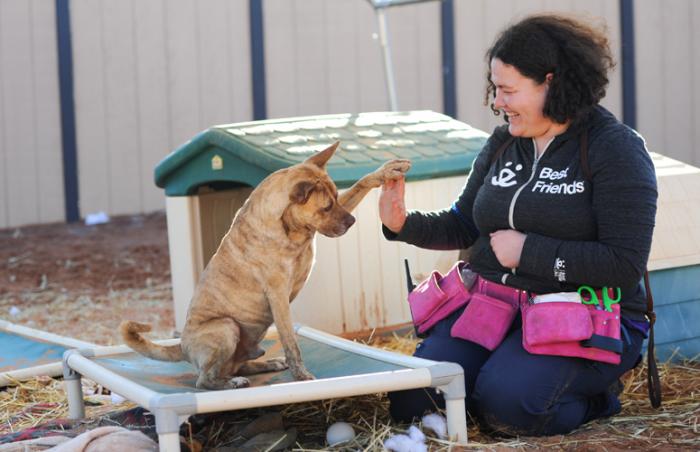 Helping a dog to stop running in circles

Most of us like a little excitement in our lives. And at one time in his young life, Lazarus the dog might have, too. But ever since he was hit by a car and suffered neurological damage, the two-year-old dog has craved calm rather than the hustle and bustle of a lot of activity. When Lazarus arrived at Dogtown at Best Friends Animal Sanctuary, he gave trainers and caregivers a puzzle to solve: finding the best ways to keep his stress level down. At Dogtown, there’s no one-size-fits-all solution to keeping every dog happy, so trainers and caregivers have worked overtime to find just the right calming regimen for Lazarus. Besides gentle training, they’ve created a spa-like experience just for him.

Lazarus’s needs were made clear shortly after he arrived at Best Friends, when he began running circles in his play yard, but not in a fun, healthy way. He’d circle and circle, wearing a deep, trench-like groove in the sand. Dogtown trainers came up with a plan: They would help Lazarus relax by teaching him to play games and indulging his senses.

Mind and body work for a dog 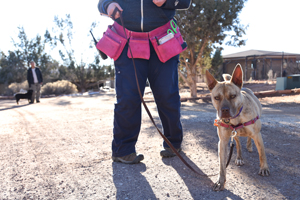 In a typical day, Lazarus gets good quality food and treats just like all the dogs at Dogtown, but he gets them in ways that help him stay happy and mellow, while giving both his body and mind a workout.

For example, one thing that stressed out Lazarus was when an unfamiliar dog or man approached him. (He wasn’t afraid of women, just men.) Since his life is sure to include lots of unfamiliar people and dogs approaching him, trainers are helping him feel a lot better about it. If he’s able to look at the stranger and stay calm, he gets a treat. Suddenly, those scary strangers aren’t so scary anymore — and their approach means a treat is coming his way.

He’s also learning (and loving) nose work, a sport in which dogs use their excellent sense of smell to hunt out hidden treats or scents. And mealtime has been turned into a game, too. Instead of eating his dinner out of a boring old bowl, Lazarus is given food puzzles. His dry food, for example, is fed to him out of an egg carton, which means he has to work a bit to get every piece of kibble out. It helps him slow down and savor his food, allowing him to enjoy it more. 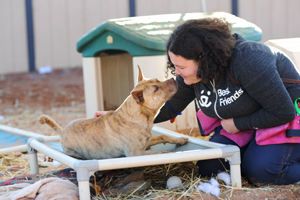 Part of making Lazarus’s life the best it can be involved making his main living area a true haven. That started with choosing the right roommates — two female dogs who give Lazarus his space and help him stay calm. When life gets stressful, there’s nothing better than having steady friends to lean on.

In addition, calming aromatherapy and dog-appeasing pheromones (DAP), as well as music specifically designed to ease anxiety in canines, are helping to soothe his senses. He even has a special outfit called a ThunderShirt, which helps him feel wrapped up in comfort and security, a bit like getting a hug when he needs it most.

Caregivers have discovered that Lazarus loves going on outings to the coffee shop in town; in fact, he’s a model passenger in the car. He also enjoys one-on one time, hanging out in the trainers’ office.

Stopping a dog from running in circles

Now that his trainers and caregivers have found the perfect balance of soothing treatments and fun activities, Lazarus no longer runs in mindless circles in his play yard. It’s a small sign that he’s beginning to put his tumultuous past behind him, and is prepared to enjoy many happy days ahead.

To bring hope and healing to more animals like Lazarus, become a Best Friends member.