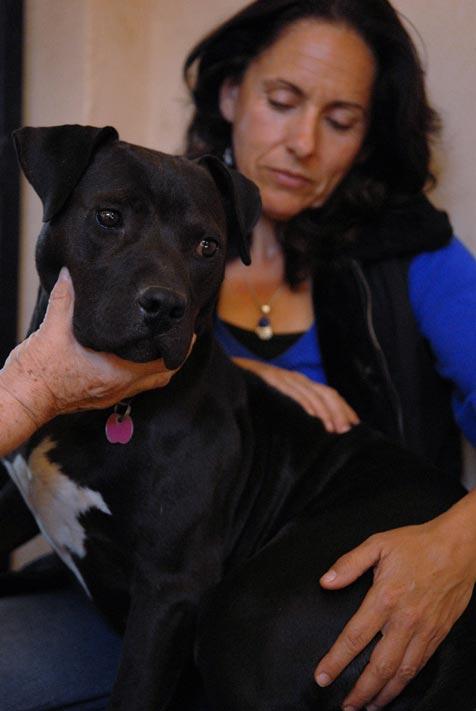 If somebody ever decides to hold a national Jin Shin Jyutsu competition, don’t expect a packed stadium of fans in body paint and team colors. As Adele Leas says every time she describes Jin Shin Jyutsu, "It’s not a spectator sport."

Adele has been to Best Friends Animal Sanctuary many times to use her skills in Jin Shin Jyutsu to benefit the animals. Jin Shin is a centuries-old practice that helps bring the body back in harmony with itself. Once in harmony, the body can release pain or tension and begin to heal faster. The easiest way to understand Jin Shin, though, is to see it in action.

The upshot of Jin Shin Jyutsu sessions is that an animal will slip into a state of deep, deep relaxation. Often they’ll fall asleep. Jin Shin works with energy blocks located throughout the body. A trained practitioner learns how to manipulate these energy blocks to create healing and relaxation. Jin Shin Jyutsu has been used for hundreds of years on people, but Adele is a pioneer when it comes to using it on animals.

Three times a year, Adele comes all the way from New Orleans to practice Jin Shin around the sanctuary. During her most recent visit, she focused on the Vicktory dogs, rescued from the property of former NFL quarterback Michael Vick.

Adele loved every minute with these dogs; she says the Vicktory dogs responded well to Jin Shin. After all, Jin Shin Jyutsu aims to release fears and promote calmness and healing. Who better to work on than a group like this, with the violent past they’ve had? Not all the Vicktory dogs were ready to trust enough to do the full program. But those who did made amazing progress.

For example, Halle (pictured) used to be full of anxiety. Adele says she stayed tense all throughout her first sessions. But after just a few more visits, Halle started releasing that stress and anxiety through the energy work. By the end, Halle turned into one relaxed lump of fluff in Adele’s arms. Not bad!

Adele’s favorite success story is Ellen, also known as Ellen Belly. (Ellen loves belly rubs!) Ellen seems to have some nerve damage in her face; the left side of her face is scrunched up like she has a bad headache. And the right side of her face droops a bit. Adele says that for the first session or two, Ellen was a bit leery. But that didn’t last long. After a couple days, Ellen started to welcome Jin Shin. She even reached a point where she’d fall asleep mid-session.

But the biggest surprise of all was when Adele and the caregivers could see visible relaxation in the left side of Ellen’s face. In only a week and a half of Jin Shin, Ellen was starting to let go of a mountain of tension and stress. While at Best Friends, Adele taught Jin Shin to any caregivers and trainers who wanted to learn. Some of Ellen’s caregivers took the class, so they can continue her Jin Shin Jyutsu now that Adele has returned home. And that’s just fine by Ellen, Halle, and all the rest.

You can help the Vicktory by being a sponsor. Read about your favorites and offer your help.

To learn more about the Vicktory dogs, please visit their special page.