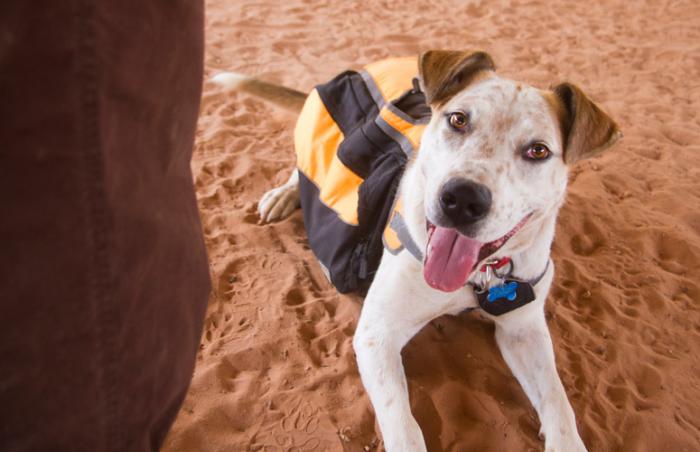 Jumpy and ‘mouthy’ dog gets centered

CB has always been a good-natured dog, and she's always liked people. She just has a lot of energy, and a little bit of trouble channeling it into positive behaviors. When she arrived at the Sanctuary (from an Arizona rescue organization that had trouble placing her), her manners weren't too impressive. In fact, CB used to think that being jumpy and mouthy was an acceptable way to greet people, including her caregivers. Sometimes she would nearly knock them down, or mouth hard enough to hurt. 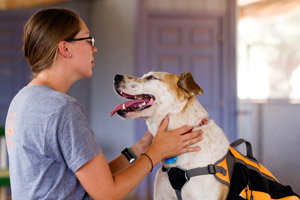 Because of these behavioral issues, CB wasn't allowed to be around Dogtown volunteers. Even caregiver Julie Tasch says that she was hesitant to go into CB's run at first. That wasn't a good situation for CB or for Julie, who was bothered by the fact that there was a dog in her care she couldn't interact with as much as she'd like. So Julie decided to make the pretty heeler mix her project dog.

CB's jumpy and mouthy behavior wasn't aggression. In fact, it's fairly common in dogs who either lack training, or who did not learn how to play and interact with people appropriately when they were puppies. For shelter dogs, many of whom exhibit the behavior, it is especially problematic. A dog with this behavior can often make a bad impression on potential adopters, which makes it harder for him or her to get adopted. But here at the Sanctuary, and at our L.A. facility, trainers and caregivers have many techniques to deal with exuberant dogs. All of the techniques revolve around the same basic principle of withdrawing a reward (e.g., attention) from the dog when he or she acts inappropriately, and rewarding him or her for acceptable behavior.

Teaching a dog the "default down"

With this in mind, the first thing Julie taught CB was the "default down." This means that if CB wants anything (mainly attention or treats), she knows she needs to be lying down on the ground rather than jumping up with her mouth open. The reason that the default down is such a neat trick (not just for CB, but for all dogs) is that it allows a caregiver to more effectively handle an over-exuberant dog. For example, CB used to get so worked up that Julie wasn't able to put on her harness or leash. But, with CB lying calmly in a down position, Julie can do this easily.

Julie also explained how important it is for CB to have calmness and quiet in her life. It helps her to feel more centered and to respond to things more positively. So, since there isn't a yoga class for dogs in Dogtown (yet anyway), Julie has found several other ways to help CB find some serenity. For example, she has crate time twice a day. This little timeout is actually a treat for CB, who feels safe and secure in her crate. 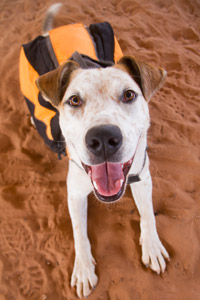 Julie has also outfitted CB with a doggie backpack that is more than a stylish accessory. CB wears it when she is stressed or when she is about to meet new people. In addition to being cute, the backpack also functions like a ThunderShirt (a snug-fitting shirt designed specifically to reduce a dog's anxiety). With her backpack on, CB is much calmer and more confident when greeting strangers. Even in Tara's Run, a large, indoor agility and training area at the Sanctuary, CB quickly drops into the default down when a new person enters the building.

Certainly, CB has made some big improvements since Julie began working with her several months ago. "She's super smart," Julie says, and she picks up new tricks quickly and easily. And that's a good thing, because Julie has set some pretty ambitious training goals for her, including Canine Good Citizen (CGC) classes. But CB now has the tools she needs to keep refining and improving her behavior, which will increase her chances of finding the perfect home.

To adopt CB or another one of our dogs, go to the Adopt a Pet section of the Best Friends website.