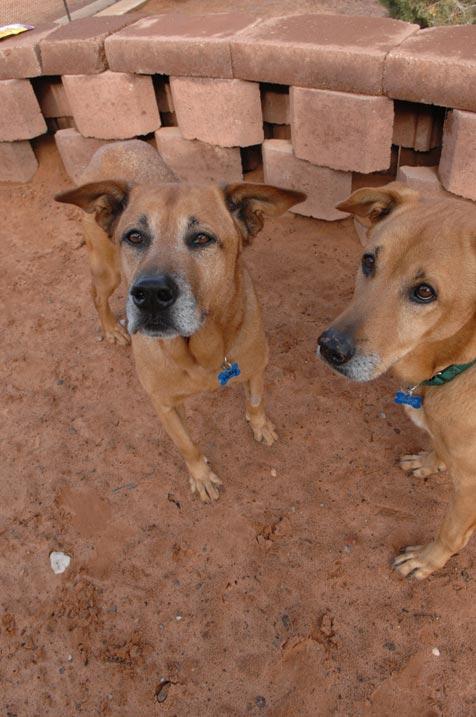 Life is looking up for two formerly chained-up dogs

California is a beautiful state. National parks, coastline, mountains, desert, you name it. More hiking trails than you could cover in a lifetime. Hard to appreciate all that, though, if you spend your entire life at the end of a chain.

Meet Hollie and Jesabel, two new arrivals at Best Friends. This mother/daughter duo doesn’t exactly have a photo album full of happy family memories. They lived on chains at their home in California for a long, long time: 12 years for mom and 10 years for daughter. Living on a chain is awful enough, but they had an even bigger problem to deal with: They never had enough to eat. Both dogs were super skinny by the time somebody stepped in to help.

Once people noticed what a sorry life these two dogs had, the family got busted for animal cruelty. When authorities rescued Hollie and Jesabel (and one other dog, who has since been adopted), the dogs weighed half what they should.

A life free of cruelty for dogs

Luckily for them, their caregivers at Best Friends are rolling up their sleeves and preparing to make up for lost time. For starters, Hollie and Jesabel have a nice big play area to stretch their legs. They’ll also go for walks and meet new friends and see new places. True, they probably won’t get to backpack in the Sierras, but at least they’ll take in some local sights!

And as far as their weight goes, there will always be enough yummy food to keep their tummies full. Hollie and Jesabel stayed in a shelter for a few months before coming to Best Friends, so they’re already looking better—no longer just skin and bones. They could still use a few more pounds, but there are no complaints from these two about being on a weight-gain program! After all they’ve been through, a little extra holiday padding is just what they deserve.

Read a story about a chained-up malamute who was rescued.