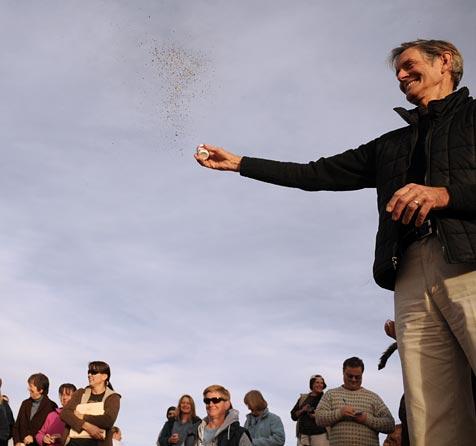 Humans care quite a lot about what goes into the construction of new buildings. We care about things like insulation, energy efficiency, the use of green materials, square footage, and so on. For the cats attending the "catstruction celebration" of the new Cat Headquarters building in progress, no such concerns amounted to a hill of beans for them. One single detail during the ceremonies was sufficient to convince them this is a quality structure in the making: the fact that there is now catnip in the foundation!

The new Cat Headquarters building will be a huge help for many different cats at Best Friends. One of the primary details that sets the new building apart is that it will boast a series of single-cat play areas. These single-cat rooms will provide space for some of the more behaviorally challenging cats at the Sanctuary. The building will include ten permanent single-cat rooms and ten additional single-cat rooms. These extra rooms can be combined into larger double or triple rooms to accommodate cats who do not need single space.

These single-cat rooms truly fill a needed niche at the Sanctuary.

"Cats are very sensible about who they associate with," explained Best Friends CEO Gregory Castle during the celebration. Sure enough, many cats can be downright picky about roommates. Even further, many cats in fact prefer to be left alone and associate with no other cats whatsoever.

That’s where this new building will be such a helpful tool, and not merely as a means to let antisocial cats live on their own.

A significant benefit to having a space like this will be that caregivers, trainers, and veterinarians can work more closely with the cats and help them through their challenges. Without the stress of always being around other animals, the cats will be much more open to instruction and socialization.

"This building will give us the capability to help cats who have challenges with other cats," explains Best Friends' cat manager Michelle Warfle. "We can help get them into homes."

Ideally, then, the single-cat rooms will not be long-term housing but shorter term retreats. If the caregivers can work with the cats in these rooms and help them through their gripes and phobias, the cats can either move in with other cats or else find homes. Cats who have recently lost their homes, for example, may be ideal candidates for these spaces as they settle in at the Sanctuary. Cats will be able to use these rooms for a variety of reasons.

One cat who is already on the list for a room is Peepers. Peepers is a blind cat who loves people and gets along fairly well with other cats. She does, however, have one little quirk that has kept her out of a home time and again. She refuses to use a litter box. Peepers is by no means incontinent, as she manages to consistently use the space directly next to the litter box. Over the years, Peepers has had many potential adopters, all of whom could not overlook her rather odd habit. Caregivers have wondered if the solution might be as simple as Peepers not wanting to use a public litter box. If she can spend time in a single-cat room and conquer this issue, all of a sudden her past roadblock in finding a home will vanish.

There’s a lot to be excited about in anticipation of the new building. As such, a large crowd of participants gathered for the "catstruction" celebration festivities. Also present for the fun were several cats who came to oversee activities and to leave their stamp of approval.

Rodeo and Roxy, two neurological cats, charmed the crowd as they strolled around and checked out the progress. Thumper, a female cat with paralyzed back legs, also worked the crowd and earned many oohs and ahhs as she inspected the place top to bottom.

Meanwhile, Wolfie, an FIV-positive cat who sported a rather dashing sweater for the occasion, helped welcome the attendants as he was held by Best Friends' Animal Care director Patty Hegwood for comments at the festivities. As part of her remarks, Patty gave instructions to the crowd on how to assist with spreading of catnip. Each participant was given a small cup of catnip to toss into the grounds, spreading good vibes and positive energy for the cats who will live in this building. And yes, several people in attendance — much to the approval of Wolfie, Thumper, Roxy, and Rodeo — slipped their catnip into the area where the foundation will be poured. Quick thinking!

The catstruction celebration culminated with cupcakes (decorated as cats, naturally) and hot apple cider. The estimated completion for the new Cat Headquarters building is summer of 2011. Updates will follow.

Read a story about a purebred Korat cat who has taken over Best Friends Animal Sanctuary.