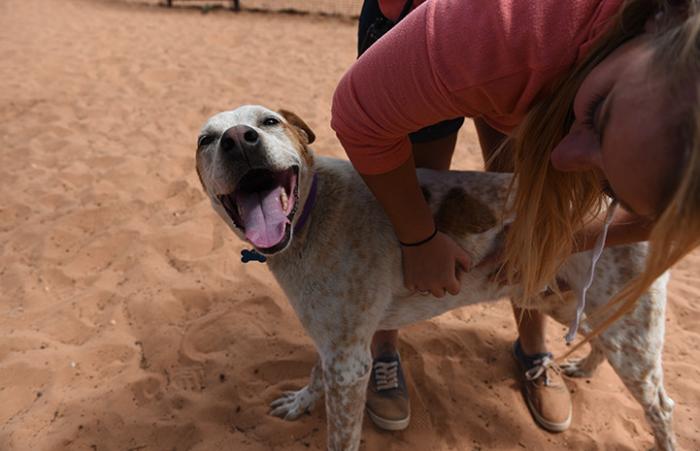 Arroyo didn’t have much to smile about when he first arrived at Best Friends. The poor dog was in rough shape after being hit and seriously injured by a car on a rural road. But luckily, the handsome heeler mix held on until a good Samaritan spotted him and got him to safety, back on the road to recovery at Best Friends.

He had a dislocated hip and one of his back legs was badly damaged. It would take nearly a month of rest, medication and rehabilitation at the Best Friends Animal Clinic before Arroyo was strong enough to graduate from there to Dogtown admissions, where Best Friends’ newest dogs start successfully transitioning to life at the Sanctuary, their home between homes. That’s where he would face new challenges and would have to heal in a different way.

Though Arroyo’s body was healing wonderfully by the time he moved, he had another major obstacle to overcome. When he was rescued, the three-year-old former stray was terrified of people. Even though he got plenty of loving care in addition to medical attention at the clinic and had become close with Rebecca, one of the veterinary technicians, Arroyo was still wary of people. He didn’t seem to have any clue how to make friends with people or other dogs.

Dogtown caregiver Kayla Sedbrook, who immediately started working with him, admits that he was a tough sell in the beginning.

“When I first met Arroyo, he was skeptical about meeting me,” Kayla says. “He barked at me through the door.” But she soon discovered that Arroyo’s favorite treat is string cheese, and it became the key to winning him over.

Instead of being standoffish when Kayla approached the door to his room, he began greeting her with happy, excited little barks instead of frightened ones.

Over time, Arroyo let his guard down more and placed his trust in his new friend. That, in turn, helped to open up his world. He soon discovered the simple joy of going for walks. “Arroyo gets so excited when you pull out his harness for a walk,” Kayla says. “He'll put his paws up on you to help put his harness over his head. Once he's outside, he can't wait to sniff everything, but will check back in with me, as if to say, ‘It's so awesome being on a walk!’"

Besides walks, Arroyo is enjoying outings to the dog park and car rides around the Sanctuary. He’s tried out the agility equipment at Tara's Run, a large indoor training area at Dogtown. And, on his first trip to one of Dogtown’s two grooming salons, Arroyo discovered how delicious it feels to be brushed. 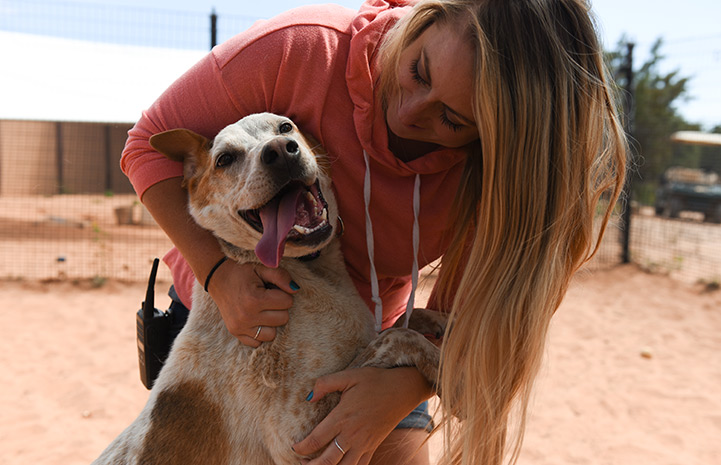 Learning to hug on cue

Now that Arroyo has a solid friendship with Kayla and his vet tech friend Rebecca (who still visits him and sometimes takes him on walks), he is working on meeting more people and expanding his circle of friends. String cheese and walks are his favorite icebreakers. Although Arroyo is still on the shy side, once he is comfortable with someone, he never forgets his friends and he becomes very affectionate.

Although many dogs are uncomfortable being hugged, Arroyo solicited this interaction on his own, so Kayla knew it was something that brought him comfort.

He’s just starting to make canine friends, too, and group walks and play dates are part of his activities. That’s another important part of his socialization that will ultimately help him be adopted.

It took a lot of care, patience, walks, string cheese and hugs to help Arroyo go from the hurting, frightened dog he was not so long ago, but it was worth every bit of effort just to see that big smile on his face each day. 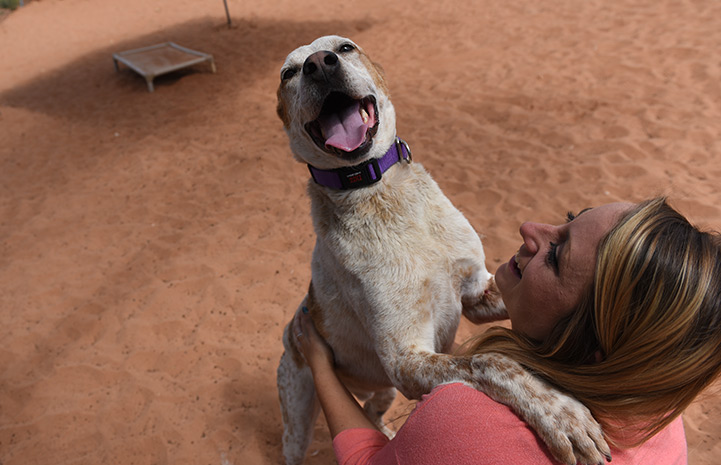