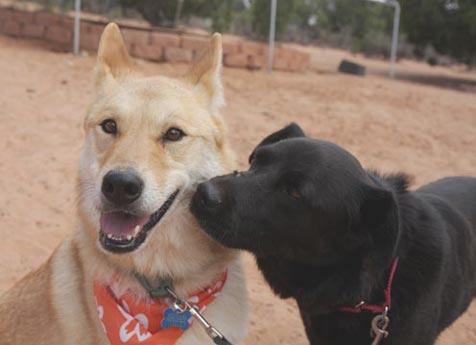 There’s nothing like a friend. And Bailey was definitely the kind of girl who needed one. Years ago, Bailey the dog was abandoned at a dumpster in the middle of nowhere with some of her siblings. Thank goodness somebody found them. Yet, by the time they came to Best Friends, Bailey had already formed her opinion about people: They weren’t for her.

One dog teaching another dog

Then along came Beau. Beau had been rescued from Hurricane Katrina, and he loved hanging out with people. And while Bailey might have thought Beau’s enthusiasm for humans was a little weird, she let it slide. They hit it off right from the beginning. Before long, though, something interesting started to happen. Caregivers noticed Bailey was not so standoffish toward them anymore. You see, Bailey would watch from the sidelines while Beau had fun with his caregivers. She got curious.

She liked Beau, she trusted him. Why was he so smitten with humans? She had to find out for herself. Bailey began allowing contact bit by bit. Strictly for scientific research, of course. She’d join Beau on leash walks and everything. But before she knew what was happening, Bailey forgot all about the scientific approach and started having a blast! After enough time had passed, Bailey decided that people were not so scary after all. She may always be a bit shy with new faces, but she’s learned how to warm up quickly.

For Bailey, her own happy ending finally came. A family from Las Vegas found Bailey and fell in love with her. They’ve decided to adopt! As for Beau, the dog who helped her overcome her fears, he must be allowed to gloat just a bit. It’s easy to imagine him grinning and saying with a wink, "Told you they weren’t so bad!" Congrats, Bailey! And Beau, thanks for all your help. Your day will come soon.

Photo of Bailey (left) and Beau (right) by Sarah Ause

You can visit Beau on the Adorable Adoptables section of this website!

All the work of Best Friends is made possible through your support. Thank you.