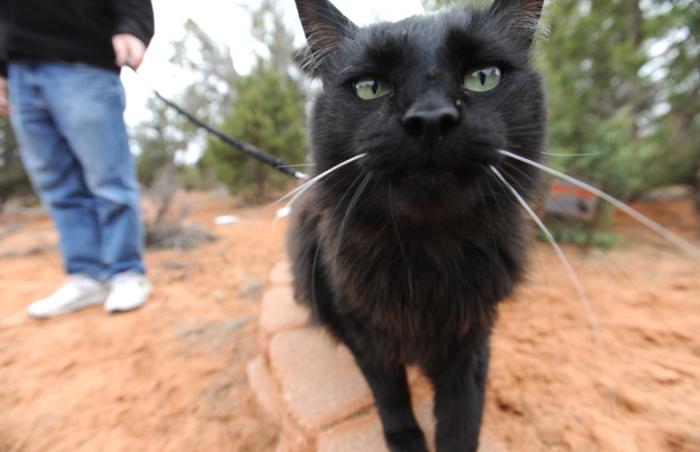 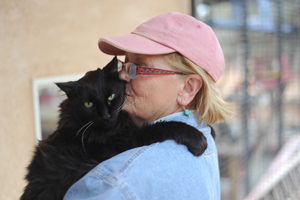 With his bright green eyes and his long, silky black fur, Patrick is a strikingly handsome cat. Underneath his handsome exterior, his body is solid and strong. But he wasn’t always so bright-eyed, happy and healthy. Patrick came to Best Friends Animal Sanctuary from a shelter where he’d run out of time. Through no fault of his own, he just kept getting overlooked.

While it’s true that, for some reason, pets in black often wait longer than their lighter-colored counterparts to be adopted, poor Patrick also had a few other things working against him. For one thing, the now nine-year-old cat was no spring chicken. Worse, he was sick, and he felt so lousy that he didn’t have the energy to keep himself well-groomed or clean. Because he could barely get off his bed to greet people when they visited the shelter, no one could see how friendly and sweet he is. Patrick needed help. So he came to the Sanctuary for medical care and some extra TLC.

When he arrived in Cat World, Patrick felt miserable. He was far too skinny, his long fur was dirty and matted, and his mouth hurt because of severe dental disease. But the Best Friends veterinary team immediately got to work on helping him feel better. As it turns out, he’s diabetic, and his condition wasn’t being controlled effectively.

The first order of business was to get Patrick on the right dosage of insulin to get him healthy again. He also needed almost all of his painfully infected teeth extracted, so he could begin eating comfortably. And his matted fur needed some serious grooming.

It took a few months to get everything sorted out. But, once his mouth healed, his blood sugar was properly regulated and his coat got the attention it needed, Patrick’s luck (and his looks) changed dramatically. He may still be waiting for his forever home, but he’s now the picture of good health.

Even though he’s feeling so great these days, Patrick’s caregivers and vets still watch him closely to make sure he stays that way. He lives in the lobby in one of the busiest buildings in Cat World. With all of that foot traffic, there are always “extra” eyes on him. Along with his twice-daily insulin treatments, he also gets periodic blood glucose tests to make sure his insulin levels are stable. 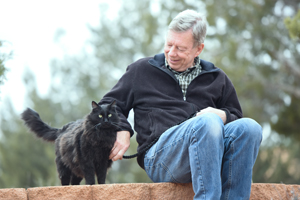 With his health fully restored, Patrick is one lucky cat. But instead of taking it for granted, he seems to get the most out of every minute of his day. He’s always happy, affectionate with his caregivers, and welcoming to visitors and volunteers — especially when they do his favorite thing in the world, which is to brush his fur. Whenever someone pulls out his favorite wire brush, he just lights up, pushing his head and face against the brush to help.

That long, thick fur also allows Patrick to enjoy the outdoor cattery, even on very cold days. There, he’ll roll around in his Kuranda bed, soaking up the sunbeams, or he’ll go outside for walks on a leash with volunteers and roll around on the ground. Whatever he’s doing, Patrick can now give it 100 percent. Because with a lot of love, good care and a little luck, his life has become wonderful again.