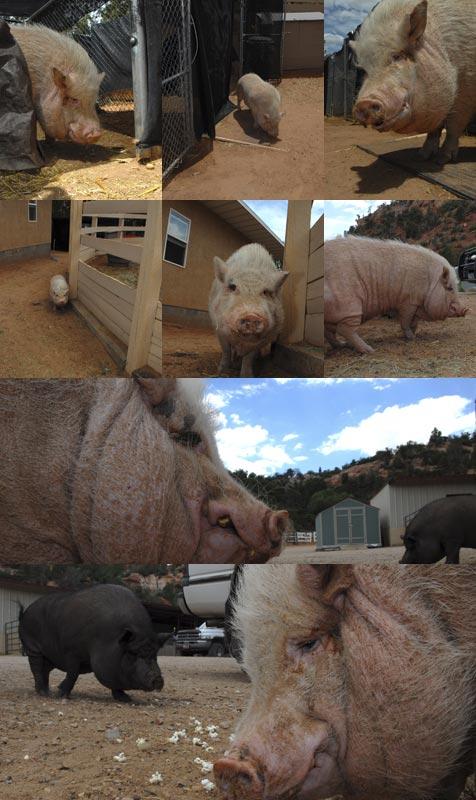 Pig is getting braver little by little

Sometimes a whole new world is waiting to be discovered right around the corner. Just ask Babe the pig.

When Babe first came to Best Friends, he needed help badly. At nine years old, he had serious arthritis, not to mention painful tusks and feet. His previous family loved him to pieces but could never find a vet willing to take care of him. When his family moved and couldn’t bring Babe along, he came to live at the sanctuary. Boy, was he happy to see the vets at Best Friends!

Regular veterinary care, a vitamin-packed diet, pain meds, and lots of TLC got him feeling tons better in no time. But for some reason, Babe wasn’t ready to explore much of the world outside his own little play area. Whenever the pig caregivers let him out for a little supervised wandering, he didn’t go much beyond the open doorway. The caregivers didn’t push him. He’d been through so much, they decided he could have a tiny little universe if that was his thing.

Pig begins to expand his horizons

But then he started to change. One day, pig manager Yvonne McIntosh noticed that Babe had a red, muddy snout. Sound like cause for celebration? Oh yeah! For a long time, Babe had strictly avoided his cool-down mud hole, so the muddy snout meant he had finally decided to "test the waters." And that was only the beginning. Before long, he became a card-carrying mud-hole member of society. He went from a snout dip to a whole-body bath. He was willing to try new things!

Even that first plunge into the mud hole, however, wasn’t as exciting as the day he finally decided to take a stroll around the block. After months at the sanctuary, Babe found the courage to step away from his beloved play area. He walked clear to the front of the building and, oh, you should’ve seen how proud he was.

Someday maybe he’ll even be ready for a walk over to visit the horses, or some other distant galaxy. For now, he’s feeling pretty proud of his one grand adventure. As far as he’s concerned, he’s already racked up enough frequent flier miles to last a lifetime.

Love potbellied pigs? You can learn more about them, and what it takes to care for them, in our online resource library.