You might say that the past year of Lady Diana’s life has been a rags-to-riches story — or that the former shelter dog was discovered by a sharp-eyed talent scout soon after she arrived at Best Friends Animal Society. Now that her hidden talents have been uncovered, Lady Diana has a brilliant career. Best of all, she’s had a profoundly positive impact on veteran Sue Wright’s life.

Sue has post-traumatic stress disorder (PTSD), which can make it difficult for her to do routine things like do her grocery shopping or go to the doctor’s office, because it triggers her anxiety. She also struggles with a disorder called drop attacks, which can cause a person to (without warning) lose all motor control and literally drop to the ground. That’s why Sue needs a service dog.

The importance of service dogs for veterans

Since 1990, Sue’s had five working dogs, one of which is Lady Diana. But shortly before Lady Diana came into her life, Sue lost the dog who’d been by her side for 13 years. Although Sue went to a local humane society and found a dog she thought could help her, it wasn’t to be. Sadly, the dog had cancer and passed away only a few months after Sue began training with him.

It was then that she hit a low point. After losing two dogs within months of each other, Sue missed her constant companions. Worse, she no longer had a dog to help her successfully navigate daily life. She felt depressed and stopped going out and doing things she enjoyed. Her physical health began to decline along with her emotional well-being. She gained weight and her blood pressure soared.

Luckily, Sue realized what was wrong and what she needed to do to fix it. She needed another dog in her life, and she knew just where she could find one.

Canines with Careers: Matching service animals with people who need them 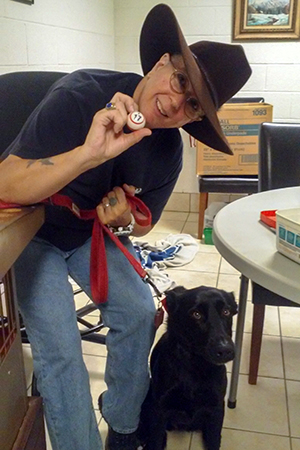 Sue found out about the Canines with Careers program when one of her friends came to volunteer at the Sanctuary. Soon, Sue got in touch with Sherry Woodard, the Best Friends animal behavior consultant who developed and runs the program. The Canines with Careers program involves screening, training and placing appropriate dogs from shelters and rescue organizations with people who need them for a variety of physical and emotional challenges. That includes finding working dogs for veterans with PTSD.

Right away, Sue knew that Best Friends’ Canines with Careers was different from other programs she’d worked with in the past. Sue already knew exactly what kind of dog could help her the most — a big, easygoing dog who would stay by her side and be there to lean on when she needed extra support. She had also begun having some problems with her teeth, but going to the dentist triggered her PTSD, causing terrible anxiety and nightmares. She needed a dog capable of walking with her into that dentist’s office and helping her stay calm during procedures.

Canines with Careers not only focuses on what people really need in a good match, but also on what they might want. Though it wasn’t a top priority, Sue really prefers black dogs because they aren’t as flashy as dogs with lighter coats. That means they can be overlooked more easily at shelters — especially if they are not particularly outgoing. Sue wanted to give one of those potentially overlooked dogs a good home and an important job.

“I appreciated that the Canines with Careers application asked good questions about the kind of dog I was looking for. I was able to give more information than in programs I’d used in the past to help find the right dog for me,” Sue says.

Sue also found another striking difference in the program. Sometimes the question of who qualifies for a service dog can only be answered in dollars and cents, with the cost as high as $10,000 or more.

“The cost can be a big roadblock for people on fixed incomes,” Sue says. “So many people need these dogs but can’t afford them. Canines with Careers makes it possible for people. This didn’t cost me anything, and (the program) saves dogs’ lives. It’s phenomenal.”

Although the wait for the right dog can sometimes stretch on for years, Sherry quickly found a potential match for Sue. When Lady Diana came to Best Friends from a rural shelter, Sherry screened her and immediately saw her potential.

“I screened her to be fine with dogs, cats and humans,” says Sherry. “She was comfortable in public, didn’t try to chase wildlife and walked well on different flooring surfaces. She was also comfortable with novel sounds and ‘strange’ holiday décor: She walked right past one of those big, inflatable Halloween decorations with the noisy motors. I also walked her under highway overpasses and over the dam in Page, Arizona. She’s a wonderful dog who was ready to go out and work in the world, and I’m very proud of her.”

Lady Diana also had a thorough wellness screening at the Best Friends Animal Clinic to make sure she was physically healthy enough to do the job she would soon be hired to do.

After Lady Diana passed all her screening with flying colors, Sherry sent her picture along to Sue. “I took one look at this big, black shepherd mix with a huge smile on her face, and I knew she was the dog for me,” Sue says.

When Sherry took Lady Diana to California to meet Sue, everything clicked. Then, a few days later, something happened that proved just how helpful Lady Diana would be to Sue.

“I was getting ready to go out when Lady Di positioned herself in front of my walker and wouldn't let me move forward,” Sue explains. “I was confused. I thought, ‘What the heck is she doing?’”

Lady Diana’s strange behavior didn’t make sense until Sue had a drop attack moments later. Somehow, Lady Diana had sensed it coming on. “Now, if Lady Di stands in front of my walker, I know I’m about to have an attack and I'll wait it out before I try to go anywhere,” Sue says. 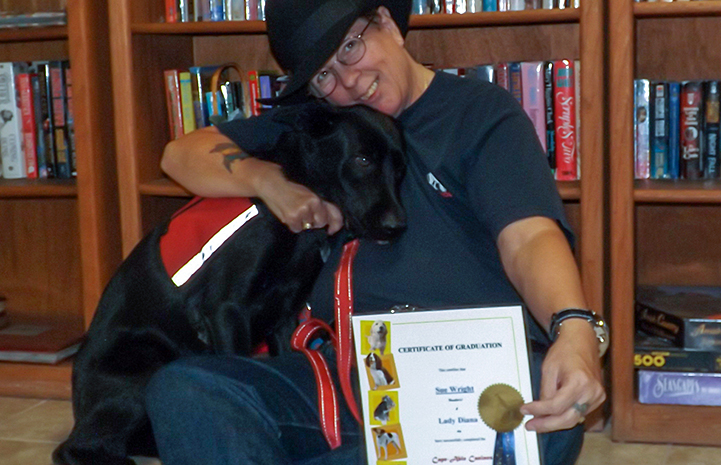 Now, after nearly 10 months together, Lady Diana has helped Sue ease back into her active life. She’s lost 30 pounds and has been able to go to the dentist without panicking. Thanks to Lady Diana, Sue can go out and do whatever she needs or wants to do.

“The (Canines with Careers) program is life-changing," Sue says. “Getting a dog makes such a difference. No matter what I feel like in the morning when I wake up, Lady Di is there, looking at me as if to say, ‘What do you want to do today?’ She is always there for me. I can't ask for anything more.”​