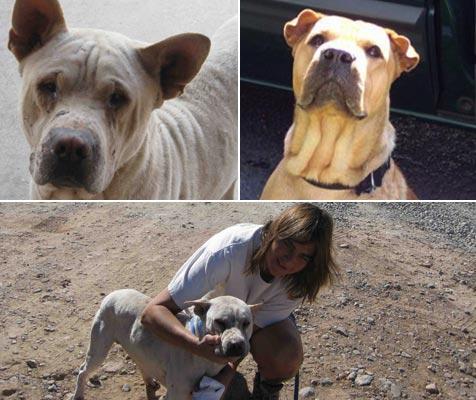 Searching for and rescuing a Shar-Pei

Have you ever tried to catch a ghost?

Looking for a Shar-Pei

In the case of a stray dog named Ghost, he clearly didn’t want to be caught, and as days turned into weeks, his chances of survival grew slim, especially after a dog with whom he’d been roaming the streets was hit by a car and critically injured.

That’s when Karen Lieberman, assistant manager of Best Friends’ No More Homeless Pets department, e-mailed a plea to Best Friends members in the area of Phoenix, Arizona, asking for volunteers to help catch the frightened, elusive Shar-Pei mix with a humane trap.

It wasn’t an easy task. Rescuers in the area were worried about Ghost, especially with the onslaught of cold weather in the open desert.

But volunteers, answering the plea, hit the ground running, posting and e-mailing fliers, driving and walking the streets, leaving food and water for Ghost, setting the trap … and waiting.

Critical care for dog in need

Then, they got the best pre-Thanksgiving gift they could ask for: Ghost stepped into the trap, the door dropped and he was finally safe. He was taken to a local vet where he was treated for exposure and malnutrition, plus he was neutered. Then the shy, cautious dog went to his new foster home on a five-acre ranch with Valerie Cook.

He’s starting to play and interact with Valerie and her other dogs. "He actually plays with me, and when I call him, he now comes running up, wagging his tail," she says.

A group effort to save a life

Those who helped save him could not be happier.

"Several people were able to come together and save this precious boy’s life," says Tuula Sadowniczak, who donated the trap that snared Ghost. "It was really a cool thing to witness, different people from different rescue [groups] working together."

"There have been sufficient donations to cover his medical costs, and there is even some interest in adopting him!" Kathy wrote in an e-mail to Karen. "The response from your [message] has been overwhelming. He was in very bad shape and wouldn’t have made it much longer had you not stepped in."

For Karen, it’s what she strives for with all the cases she works on. "It’s a happy ending," she says.

Before and after photos of Ghost courtesy of Valerie Cook