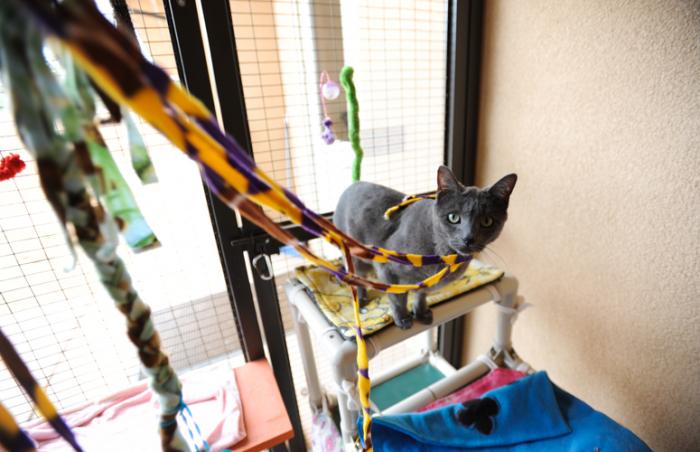 Self-destructive tail-chasing behavior in a cat 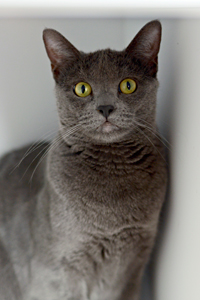 Penelope’s had no shortage of challenges in her life. As a newborn kitten, she was thrown away in a dumpster. Though she was rescued and quickly adopted, she ended up losing her home. She was dealt more than one unfair hand in the first four years of her life, and even after reaching the safety of Best Friends Animal Sanctuary, she faced yet another obstacle preventing her from truly settling in and being happy.

The problem was that Penelope liked to chase her tail. This wasn’t the cute, playful tail-chasing of a cat who catches the “toy” and suddenly realizes she is chasing herself. Penelope didn’t seem to recognize her tail as part of her body, and she would viciously attack it.

Rooting out the cause

Staff moved Penelope into her own room in Cat World Headquarters so her caregivers could focus on unlocking the mystery behind her behavior — hopefully before she could seriously harm herself. Rooting out the cause of Penelope’s distress would be crucial to stopping her self-destructive behavior.

Since Penelope is a smart, active and curious cat, her caregivers thought the problem might be boredom. So, suddenly, Penelope celebrated her own personal Christmas with dozens of toys, more than she’d ever seen in her life. She received extra attention from everyone who passed her room, and became entranced with watching fish swim and birds fly by on a digital picture frame. Aromatherapy scents and calming cat pheromones perfumed the air.

And, because she appreciates routine, she got to start every day in a fun, exciting way — by eating her breakfast out of a food puzzle instead of a boring bowl. Her caregivers also decorated her outdoor cattery with cat-safe streamers and hanging feather toys. Once they’d given her all the distractions in the world, Penelope’s caregivers watched and waited to see whether they’d keep her from fixating on her tail. 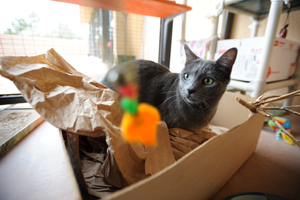 As the feathers and streamers moved gently in the breeze, Penelope began chasing them instead of her tail. However, it was a short-lived distraction that didn’t solve the problem. So Cat World staff tried the opposite. Instead of giving her everything, they took away one thing. As an experiment, they took all of the catnip out of Penelope’s room.

The change in Penelope was dramatic. Though she still has a bad day here and there, she no longer sees her tail as her mortal enemy. Most of the time, it doesn’t bother her at all. Although the catnip may not have been the sole cause of Penelope’s behavior, it appeared to be making things worse.

Now that her unusual reaction to most cats’ favorite herb has been figured out, Penelope’s life is finally safe and stable — two qualities that had been in short supply in her life until she came to Best Friends. But now she’ll have happiness in spades at the Sanctuary for as long as it takes to find her forever home.

Best of all, she still gets to keep all the streamers, toys and extra love coming her way.