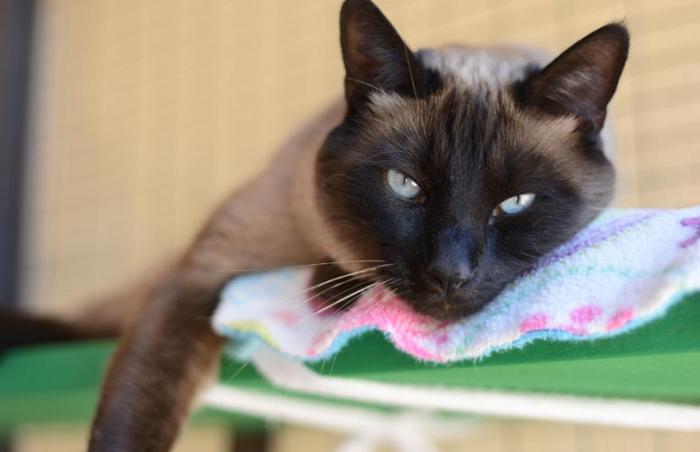 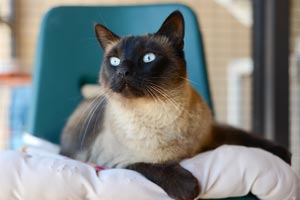 Spencer is a handsome Siamese mix cat who has presented Best Friends staff with many puzzles since he arrived at the Sanctuary. But when it comes to keeping animals both happy and healthy, we’re not afraid of a challenge.

Spencer came to Best Friends Animal Sanctuary from a rescue organization that was having a hard time finding him a home. The handsome boy tested positive for feline leukemia (FeLV), a virus that affects his immune system and makes him susceptible to secondary conditions, such as upper respiratory infections.

Because FeLV can easily be spread from one cat to another through close physical contact, Spencer went to live in Calmar’s, a housing facility for the Sanctuary’s FeLV cats. As in most of the buildings in Cat World, Calmar’s cats live together in groups. But Spencer didn’t want to live with other cats, so he hid in the bathroom.

Concerned caregivers moved him into one of the Sanctuary offices, hoping he’d be happier in that setting. For a while, he seemed content. But his human office mate traveled a lot and Spencer began using his teeth to signal that he wanted attention whenever people were around.

In the meantime, Spencer had been retested for FeLV at the Best Friends clinic. The results were inconclusive, or “discordant.” Discordant cats test positive for FeLV on one of the tests commonly used to detect the virus (usually the SNAP test, which detects the virus in the bloodstream), but he was negative on the other (most likely the IFA test, which tests for the virus in the bone marrow).

Being discordant meant that Spencer presented Cat World staff with a real conundrum. He couldn’t go back to Calmar’s because, if he didn’t actually have FeLV, he’d be at risk of contracting the virus. But he also couldn’t live around cats who tested negative for FeLV, because, if he did have it, that would put them at risk. 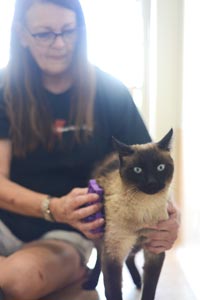 Luckily, Cat World had another option for him. Spencer moved into the “discordant suite” at Cat World Headquarters, where he has one of two adjoining rooms all to himself. He isn’t isolated, however. He can see his feline “roommates” on the other side of his outdoor cattery. And that suits him perfectly.

Spencer also began going on daily walks with Dr. Frank McMillan, director of well-being studies at Best Friends, and Cat World caregiver Dale Oster. Dale would also sit in his room and read to him. If he used his teeth on her, she would get up and leave, signaling that people don’t like that. Spencer caught on quickly, learning that he’d get all the attention and affection he wanted, as long as he didn’t turn into a kitty vampire. Exercise and constant interaction with people lifted his spirits and made him a much happier, calmer cat.

Finally, Spencer is in the right place. And his caregivers are in tune with him. They’ll keep readjusting and striving to give him the perfect balance of space and affection until, of course, he finds a home of his very own.

To help more animals like Spencer get the royal treatment they deserve, become a Best Friends member.