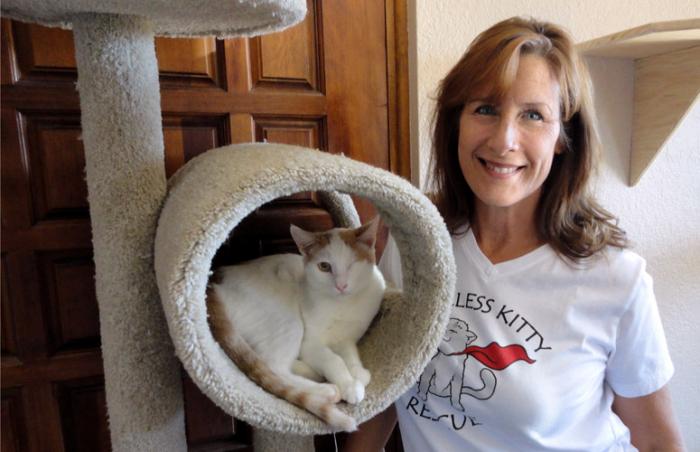 Starting her own cat rescue organization

Kim Kamins' first encounter with Best Friends was in 2010 when she took her cat, Friday, to the vet. She came across a Best Friends magazine in the waiting room and was immediately hooked. What she didn't know at the time was that Best Friends would inspire her to do so much more.

Kim first volunteered at Best Friends Animal Sanctuary in August 2011. When she returned home, she discovered the cat rescue group she volunteered with in Phoenix was going through a difficult time. Kim was one of three people who stepped in to keep the organization going. Later, when the group's founder was able to take over again, Kim and her two colleagues partnered to form their own organization. Fearless Kitty Rescue was born. 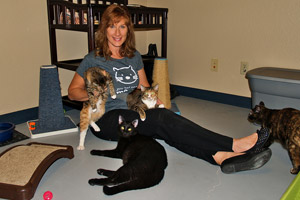 Helping run an established group is a far cry from starting your own organization from scratch, but Kim says, "I knew that there was a place where we could learn how to do things better." So she turned to Best Friends for guidance and attended the No More Homeless Pets Conference in 2012.

"If it weren't for my experience with Best Friends," recalls Kim, "I don't know that I would have taken the leap of faith to really get involved with starting a rescue."

Caring for a cat with inflammatory bowel disease

Fearless Kitty Rescue serves the Fountain Hills, Arizona, region, pulling cats and kittens from shelters and local Indian reservations. So far this year, they've taken in 224 felines, finding homes for over 200 of them.

Blink, a kitten who came to the rescue group after he was born to a free-roaming cat in the area, was one of their first rescue cases. Blink became a special case when he was diagnosed with inflammatory bowel disease and also lost one of his eyes to an upper respiratory infection. Fearless Kitty Rescue provided him the specialized care he needed, and all their extra efforts paid off; Blink was recently adopted by the perfect couple who understands his special needs.

Overjoyed, the organization hosted a special send-off party for Blink. Kim says, "Those adoptions reinforce everything we stand for in rescue."

"For me, Best Friends means education," says Kim. "Best Friends is the one place I know I can go to gather resources and learn the best practices for my rescue. When you're rescuing and saving animals, reinventing the wheel is not an option, because you just don't have time. The animals need your time." 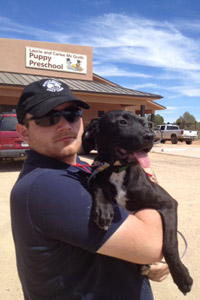 A positive approach to saving pets

While Fearless Kitty Rescue keeps Kim busy, she still makes a point to get back to the source of her inspiration for fun. She and her son Brian still visit the Sanctuary to volunteer, recently taking Coltrane, a puppy, on his first outing. It was sound sleeping that night for all, following an afternoon of running together on the grass.

Positive experiences like that continue to impact her life.

"Best Friends has inspired me to always focus on the positive things, the good work we're doing, the success stories," says Kim. "It's that approach that helps you get through the tough side of rescue that inevitably comes with the work we do. A good attitude goes a long way, especially in rescue."