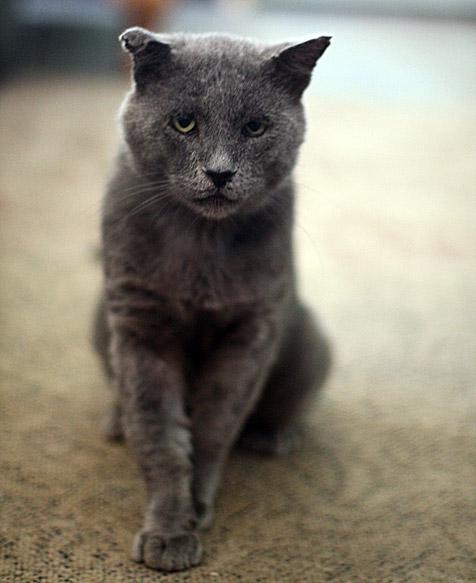 You know the type. Every neighborhood has one. He’s the alpha male. Some call him a heartbreaker, some call him baby daddy, others call him a nuisance.

Trixie the tomcat was all that and more. A 10-year-old large, gray cat, he had been strutting his stuff throughout the community for quite a while. People complained.

Luckily, Trixie lives in Albuquerque, New Mexico, where a grant from PetSmart Charities® has enabled Best Friends to partner with the City of San Antonio Animal Care Services and the Albuquerque Animal Welfare Department to bring a massive, three-year trap/neuter/return (TNR) plan to the area.

TNR in Albuquerque saves the day

As part of the community cat program, nuisance calls about free-roaming, feral and stray cats get routed to our partners and staff. The nexus of the program is to stop the influx of cats from entering the shelter system by getting them spayed/neutered and returned (aka trap/neuter/return, TNR) from whence they came.

Desiree Triste-Aragon, program coordinator, fielded the call about Trixie and headed out to the area right away. She saw quite a few gray-coated cats of every age in Trixie’s territory. She knew she was going to be helping quell a lot of new litters just by fixing this one cat. And she knew she’d be back to make sure all the other cats of the area were also spayed/neutered.

"What I encountered when I answered the call about Trixie was astounding," shares Desiree. "I located his caregivers, and they were blown away when I explained to them that I was going to pick up the cat, get him neutered, and bring him back. They were overwhelmed with the service we were providing. They knew he needed to be neutered, but they didn’t realize the resources that were available."

Desiree identified five additional caregivers in the area and has fixed 40 cats in Trixie’s neighborhood, approximately 90 percent of the colony so far.

Working with the public in a nonjudgmental, solution-based way is a hallmark of the program. The program also has a Spanish-speaking program assistant, veterinary technician Melissa Rivera, who helps provide extra support in the neighborhoods that are often overlooked when resources are distributed.

Desiree works closely with Jayne Sage and Alek DeWispeleare of Street Cat Companions to coordinate the TNR efforts of the community cat program. Jayne and Alek have been doing TNR in Albuquerque for over six years. Jayne has taken a scientific approach by using computer mapping to track known cat colonies and determine where more concentrated resources need to be focused.

Jayne and Alek are a critical piece of this lifesaving puzzle – they not only assist in transportation (along with Desiree), they work directly with feral cat caregivers. In addition to spaying and neutering the cats, any cat who is ill or injured has their issues addressed as part of the program.

Helping people who have a sick or injured cat has had some further benefits. As Jayne and Alek explain, "We get a lot of calls about medical issues and that opens the dialogue about spay/neuter. There are many people feeding cats in Albuquerque. People care about them, but they don’t always understand the importance of getting the cats fixed. We assist with getting their cats the medical attention they need, but we also get the cats spayed and neutered."

The community cats of New Mexico have an advocate in Jim Ludwick, the animal program analyst for Albuquerque Animal Welfare. A seasoned journalist by trade, he’s been promoting TNR since 2007 when he was hired to analyze city animal programs and make suggestions about how they can be improved. At the time, several thousand feral cats were being routinely killed in the shelter every year.

"Even though Albuquerque was trapping and killing thousands of cats, the program didn’t succeed as a population-control effort," shares Jim. "Meanwhile, the feral cats added to crowding in the shelters, contributing to problems that jeopardized our adoptable cats."

The TNR program helps the overall conditions in the shelters, while reducing the killing and providing better population control in neighborhoods all over town.

"It’s been months since we’ve killed a cat for simply being feral," says Jim.

The save rate for cats during the month of July was 89 percent. Overall, the cat euthanasia between April and July of 2012 was down 68 percent, and intake was down 16 percent compared with the same time last year.

How you can help community cats (strays and ferals)

Want to help the community cats of your neighborhood? Get info about TNR resources.