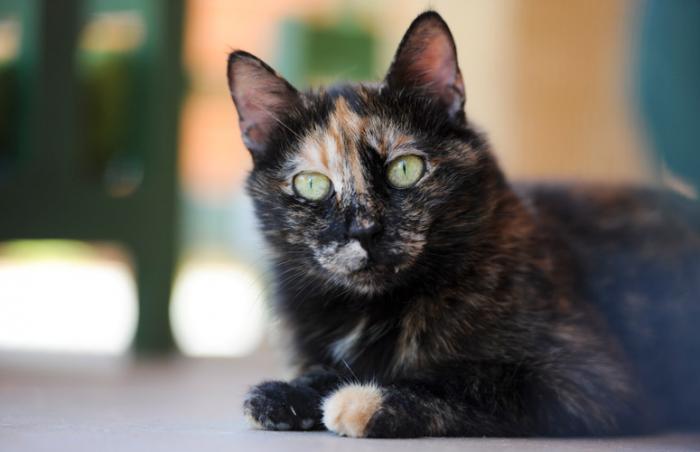 Korky Torti the tortoiseshell cat is a long way from her original home in Beirut, Lebanon, where she lived as a community (feral) cat. In 2006, when she was two years old, she was one of 300 dogs and cats rescued and brought to Best Friends from the only animal shelter in Beirut, which had suffered too much damage to continue operations during the war between Lebanon and Israel. According to caregiver Mike Bzdewka, who assisted in the rescue, Korky Torti arrived at the Sanctuary with a total mistrust of people. Once in Cat World, she promptly headed up to the rafters and spent all her time there.

But, in the years since her rescue, Korky Torti, though still a bit wary, has become more and more interested in people. And she has increasingly been showing signs of coming around. She's now gotten comfortable enough to come down from the rafters and wait for feedings. She'll even eat her meals close to her caregivers, take treats from them, and lick baby food from their fingers.

Though these are all very positive signs, like many cats who aren't socialized within the first four months of life, it's quite likely that Korky Torti will never be anyone's lap cat. Still, Robin Jackson, a Cat World team leader, says that she "is getting so close" to accepting people as her friends. And, according to Mike, she will play with caregivers and volunteers if they have a string and feather toy like Da Bird. She also likes to entertain herself (and thus her caregivers) by batting crinkle balls around the room. 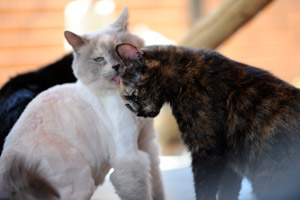 While she continues to build her relationships with humans, Korky Torti gets along superbly with other cats, and she adapts well to new ones who take up residence in the room. As a result, she has plenty of feline pals. And she looks out for them too. Once, when one of the cats was getting sick, Korky Torti gave her caregivers early warning by jumping up and down at the window of the door to her room.

Says Robin, "She is the cat who made me realize that even though they don't want us too near, they know we take care of them and will reach out when in trouble." In addition to her other friends, Korky Torti is particularly close to a calico cat named Aurora. "They are truly cat's cats," Robin explains, "and they love each other."

Mike points out that Korky Torti is gorgeous, and that, despite her lingering cautiousness around humans, she has a sweet personality. He's willing to bet that, if she went home with someone willing to spend some time with her, she would come around and make further breakthroughs. In the right home, with the right amount of time and patience, Korky Torti has great pet potential.

To learn more about Korky Torti and the other adoptable cats at the Sanctuary, go to the Adopt a Pet section of our website.