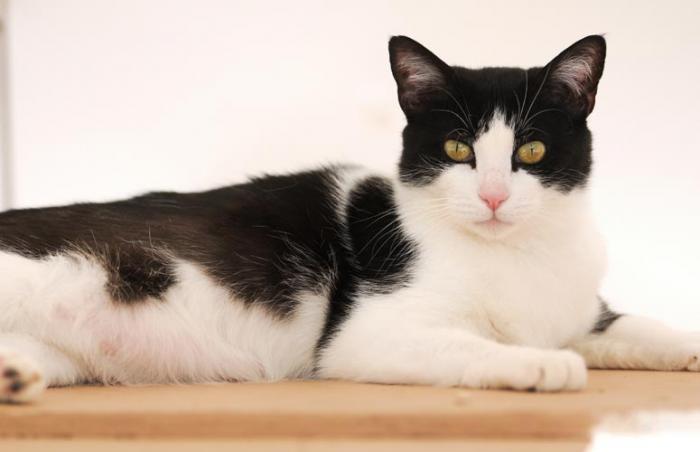 Look for Dutchess today, and you’ll likely find the pretty little tuxedo cat napping in the rafters in her outdoor cattery in Cat World. She looks peaceful and serene, lounging around and watching life go by from her lofty perch. But there was a time when poor Dutchess could have thought things might never be OK. She was living under a trailer in West Virginia – a stray cat just trying to stay alive long enough to keep her newborn kittens out of harm’s way.

Saving a tuxedo cat and her kittens 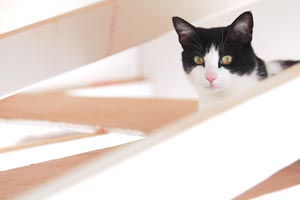 A dog had discovered Dutchess’ nesting place. She did the best she could to protect her babies, but she needed help. A local rescue league stepped in just in time. Volunteers whisked Dutchess to safety, but, because it was dark out, they had overlooked her tiny kittens. Dutchess had dodged danger, but her kittens were helpless without her.

The worried mother cat fretted until volunteers figured out something was wrong and went back to rescue her five kittens. Finally, Dutchess and her family were out of danger. And, eventually, she and her kittens would get help finding homes so they wouldn’t have to go back out on the streets and be vulnerable again.

After all she’d been through, it should have been that easy for her. But a test revealed that Dutchess has the feline immunodeficiency virus (FIV), which weakens a cat’s immune system. Luckily, she hadn’t passed it to her kittens. Although a second test confirmed that Dutchess has the virus, her kittens were perfectly healthy, and the rescue organization found homes for them as soon as they were old enough.

But Dutchess was, in a sense, still left out in the cold because of misperceptions about FIV. While cats with the disease can be more susceptible to secondary conditions, such as upper respiratory infections, ringworm and dental disease, due to their lowered immunity, Dutchess didn’t have any of these problems. And although it’s entirely possible for her to lead a perfectly normal life, the rescue organization had trouble finding her a forever family. 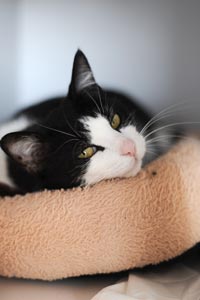 Beauty sleep and peace for a special cat

So Dutchess came to Best Friends Animal Sanctuary, where caregivers and the Best Friends veterinary staff have lots of experience with FIV and know that cats with the virus can live long and happy lives. When she first arrived, Dutchess made it a point to catch up on her beauty sleep. She had been on guard for a long time, and it felt good to be able to rest and relax.

Though she is far less wary now, life on the streets has left its mark on Dutchess. She’s independent and has carved out her own private space in her room in Cat World. She enjoys visitors – both human and feline – in small doses. But she’s slowly coming around as she adapts to her new environment, and, best of all, she’s finally found peace, safety and serenity.