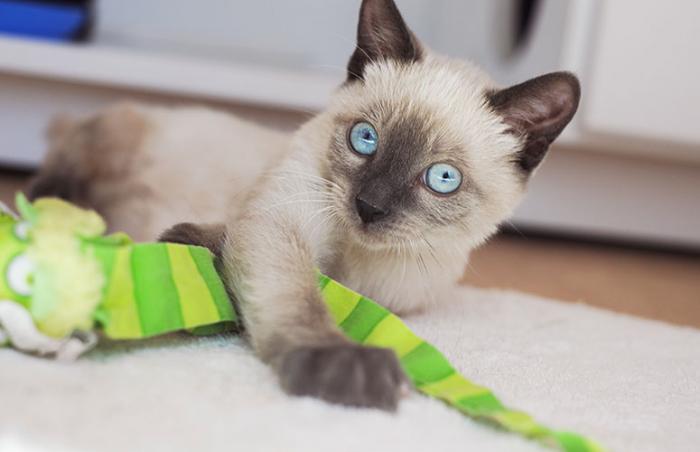 At barely six months old, Mork is just like any other kitten; he's tiny, adorable, and raring to go. He'll dash from one end of the room to the other at about the speed of light, and pounce playfully on another kitten along the way. He'll also chase around a string toy called Da Bird, and bat a crinkle ball back and forth with another cat. The amazing thing is that he does all of this on just two legs. 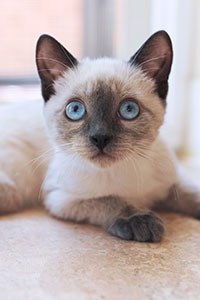 Mork was born with two severely deformed back legs. Before he came into the Best Friends Pet Adoption and Spay/Neuter Center in Mission Hills in Los Angeles, Mork was with a rescue group. While with that group, veterinarians removed one of his back legs, which clearly was of no use to him. But they left the other leg in hopes that he would begin using it on his own, and build up some strength in it.

Since he came to the Sanctuary, Mork's caregivers have been trying to come up with clever ways to get him to use that back leg. They often engage him in play to encourage his movement, and they've outfitted his room in Cat World Headquarters with rubber-backed throw rugs, so he can gain a better foothold. 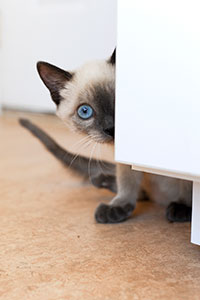 Though it may be too early to tell, it seems unlikely that the little kitten will be able to use the leg to walk around. But he sure knows how to use it like a cane, sticking it out to steady himself whenever he seems a little off balance. And his front legs and feet (which are endearingly large) are impressively strong. Not only can he race across the room, but he can also pull himself through the cat door, and into the cattery, quite quickly, and with minimal difficulty.

He can also keep up with his roommates. Mork lives with a one-eyed red tabby kitten named Buzz, and Buzz's littermate, Louie. Of the three, Louie is the quietest. He seems perfectly content to watch his brother and Mork play-wrestle all over the cat furniture. In fact, watching Mork and Buzz from a distance, you would never guess that these kittens were missing anything. And, really, they are not; they are both going about their business of being happy, playful kittens. 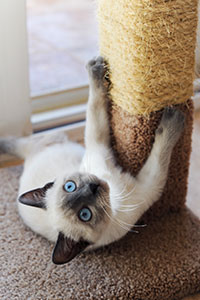 Because Mork has never been able to use his back legs, getting around on his two front ones seems to come naturally to him. He certainly impresses his caregivers, visitors and volunteers, and gets plenty of attention from them. In fact, the little Siamese mix is so cute, and so full of personality, that he's impossible to ignore.

When Mork first came to Best Friends, he spent some time in Hope House, the Cat World clinic. There, he charmed his caregivers by meowing loudly, sticking his big front feet through the front of his crate, and waving at them to get their attention. If tactics like that don't work, Mork knows he can use his voice. Being part Siamese, he's got a little extra volume in his meow, and he has a very unique purr; it has a kind of chirrup to it, like a cricket. Surely, this combination of good looks, personality and outspokenness proves that being a little different doesn't have to hold you back. Life on two legs doesn't hold back little Mork at all.

Adopt a kitten or other pet

To learn more about Mork and the other adoptable cats at the Sanctuary, go to the Adopt a Pet section of our website.