Jay Garrett, Best Friends’ manager of lifesaving operations who’s working out of a very busy shelter in Texas, recently posted the above photo with this caption: “This picture makes me so happy. For those who have been lucky enough to be hugged by Tiger, you can share my sentiments for this amazing cat.”

Palm Valley Animal Center in Edinburg, Texas, is one of the busiest animal shelters in the country, and Tiger’s hugs in the laundry room have given countless people a moment of calm during difficult or stressful days.

Since we all need more Tiger in our lives, here are 10 more animals to make you happy. Enjoy.

Having to be on strict rest after leg surgery is a huge bummer. It’s even worse when you’re bursting with kitten energy and all you want to do is play. At the Best Friends Animal Clinic in Utah, wee kitten Kerry not only gets physical therapy, cuddles and toys, but she stays entertained with an iPad and a game made for cats. It has parental controls so she can’t “accidentally” order herself catnip from Amazon.

Scrappy recently arrived at Best Friends Animal Sanctuary from L.A., and he really tried to play it cool. But there were all these nice people, and red sand, and lots of room to run around and play, and so he gave up. 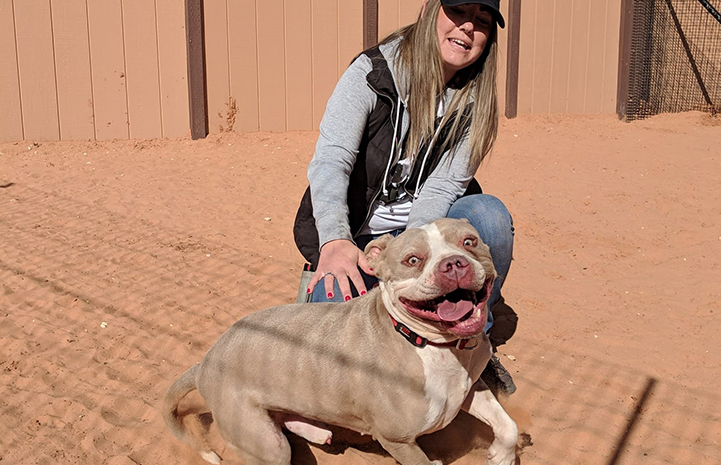 I'd say Scrappy is enjoying himself in the desert. – Tierney from Dogtown at Best Friends

Tidying up with cats 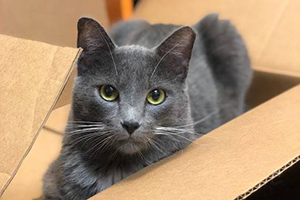 You know what cats are really good at? Putting themselves in boxes. And since millions of people are learning about the value in organizing our things into boxes, Theodore the cat is here to remind us that cats knew it first.

Like the rest of us, Theodore binge-watched Tidying Up on Netflix. He is taking Marie Kondo's KonMari Method very seriously, putting everything in boxes, including himself! – Lauren from Best Friends in L.A.

Tidying up with dogs

The tidying up thing really is everywhere right now, so we couldn’t leave the dogs out of it. If cats are the perfect pet for those who crave tidiness, then adorably scruffy Jace might be just right for someone looking for the benefits of having a dust mop without actually having to mop. Plus, he knows how to shake. How’s that for smart? 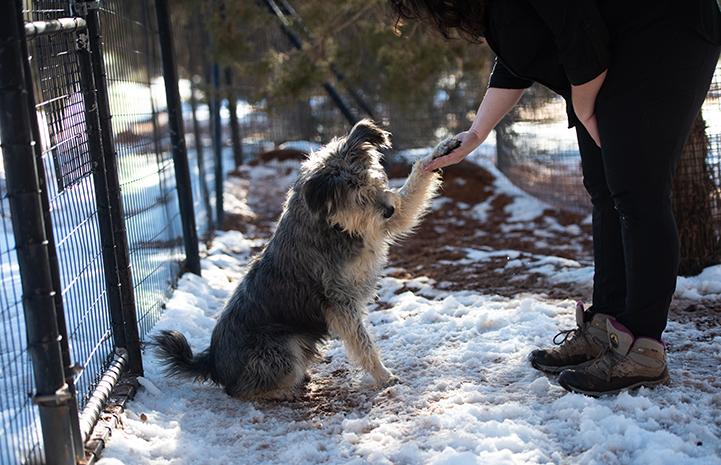 Hate tidying up? Adopt your very own smart mop — kind of like a Roomba, but cuter. – Dogtown staff

A most majestic horse

This is what happens when you get out a camera to photograph Dusty. Instead of tossing his mane in the wind or galloping through his pasture to show off his beauty and grace, he presented his whiskery chin, bubblegum tongue and huge velvet nostrils at what he must have felt was his best angle. 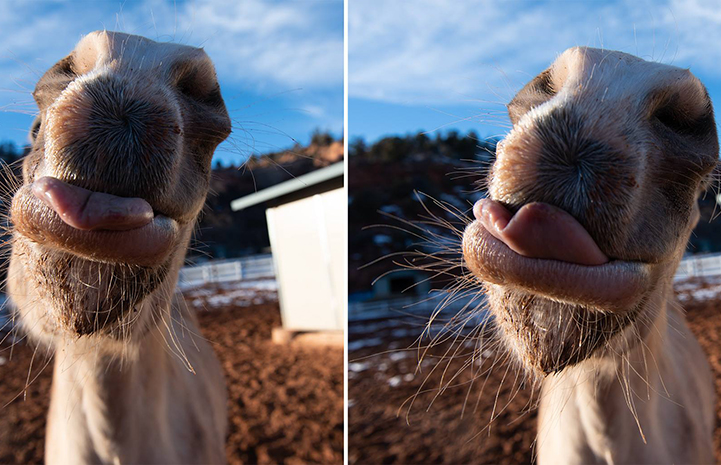 Dusty here, reminding us that the horse is the most majestic creature in the universe. Obviously. – Molly, Best Friends photographer

Cat’s cozy quotient is off the charts

This is the look of pure bliss. Posh Spice needed quite a lot of medical care when she first arrived at Best Friends in Utah. But now that she’s feeling good, she alternates her time between hibernating in a cat bed, purring and reminding people that even fancy purebred cats can end up in shelters. She’s put that part of her life behind her though, because she recently got adopted. 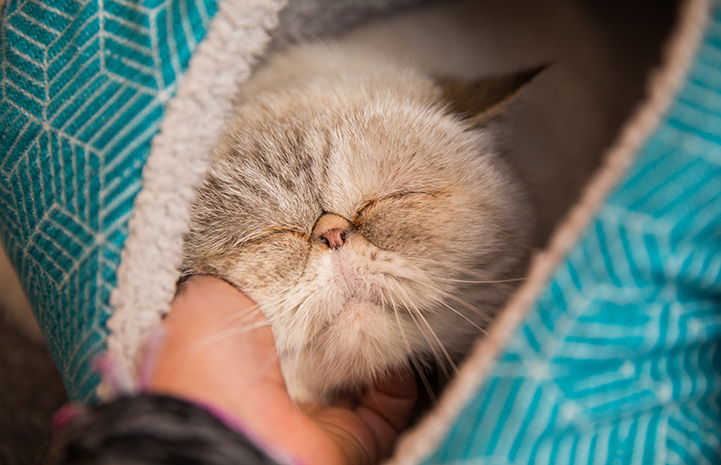 With three days of consecutive precipitation forecast for Utah, the cats in our Best Friends Lifesaving Center have gone into full hibernation mode. – Amy at Best Friends in Utah

Is there a breeze in New York today? From which direction? Oh, yes, it’s from the left. At least, you might think that if Maulding is anywhere nearby. His larger-than-life ears gave up trying to stand, and they surrendered in the cutest way to gravity. It wasn’t long before someone fell in love with those ears and adopted this sweet pup. 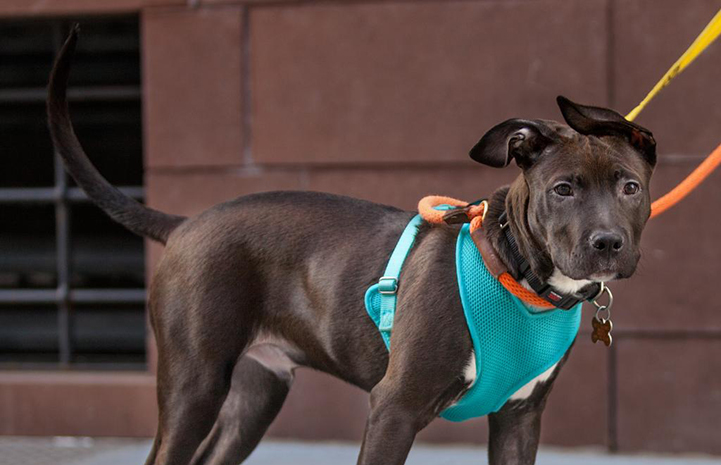 It's Woof Wednesday: Meet Maulding! If those ears don't pull you in, his goofy personality definitely will. – Mallory at Best Friends in New York 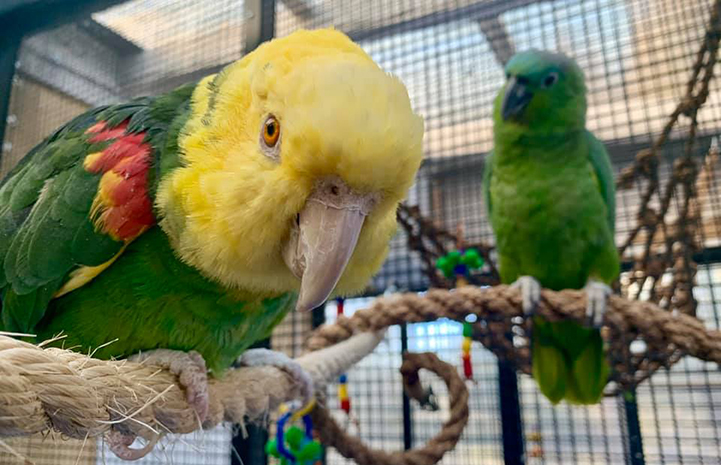 Happy 45th anniversary to Patty and Jonny! They have been living together for 45 years and 38 of t hose years were spent with the same family in New York. Congrats Patty and Jonny! – Parrot Garden staff

Buster and his emotional support lamb

Appearing on TV can be a big deal for a little dog, and before hopping in the car recently to go to the station in Atlanta for filming, Buster grabbed his favorite toy. With Lamb Chop by his side (err, in his mouth), he was ready to take on the world (or at least the Atlanta area). 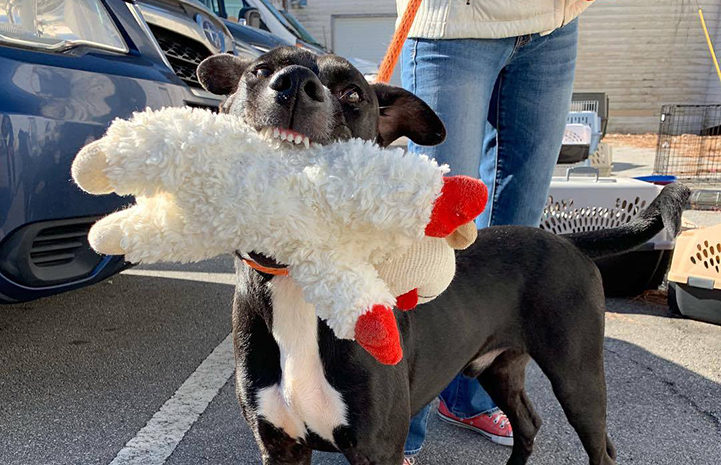 Buster was the Pet of the Week on CBS Atlanta this morning and he's feeling very proud of himself. He brought along his lamb chop for moral support. – Erin at Best Friends in Atlanta

Most interesting cat in the world

It’s good luck when he crosses your path. When it rains, people say it’s raining Brads and dogs. He has 99 lives. His dander cures people who are allergic to cats. Dogs are afraid of him. OK, maybe only the first statement is true. But still, Brad says, “Stay furry, my friends.” 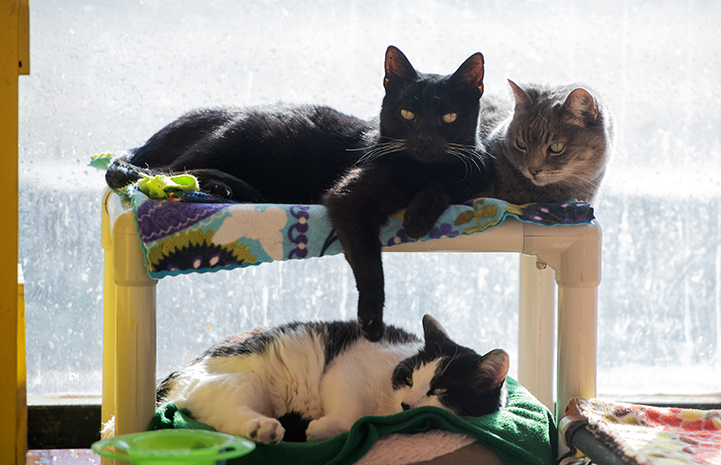 Brad (the tall, dark, handsome one) is quite a hit with the ladies! Demi and Magna snuggle in close on a warm winter's day. – Molly, Best Friends photographer

Not ready to adopt? Foster a pet for a few days or weeks. Whatever your schedule allows will save a life.