Image
Woman became sick and was facing foreclosure. The 180 cats on her New Jersey farm were in a dire situation. Volunteers come to the rescue.
By Denise LeBeau 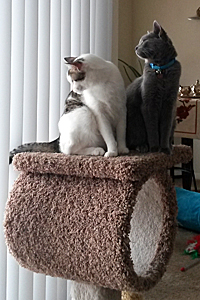 Today, Troy is a happy, healthy cat living a normal life. He loves belly rubs. But just a few months ago, the beautiful cat with sea-foam green eyes and a coat resembling a patchwork quilt was close to losing his life.

Troy was one of 182 cats in a dire situation in New Jersey. The cats had been taken in over the years by a woman who was now ill and facing foreclosure on her farm. She was no longer able to care for the cats, so they needed immediate help as well as permanent places to go. When Joyce Moyer, a longtime Best Friends member and volunteer, learned of the situation, she went to the farm to help. What she found there was overwhelming, but she didn’t turn away. Instead, she joined other people dedicated to making sure every last cat was safe and sound.

The first order of business was to separate healthy cats from those who needed extra veterinary care. Because so many cats were involved, one volunteer suggested killing some of the sicker ones as a way to get the number down. Joyce disagreed, and took a stand: Sick cats needed treatment, not a death sentence.

“We were going to save every healthy and treatable cat, or I would not be part of the rescue,” she says. Joyce’s commitment to creating a positive outcome for each adoptable cat inspired the core group of volunteers to do the same. So they got busy treating cats who needed it and finding homes for cats who were ready to go.

Best Friends members to the rescue

Many of the friendly, healthy cats found homes quickly and, after a few months, the only cats still waiting were the extremely shy and truly feral cats. Joyce and the other volunteers were determined to help every last cat on the property find a safe home, but, Joyce says, “Feral cat placement can be quite a challenge. We needed extra help.” So she reached out to Best Friends because she knew thousands of other members felt the same way she did about saving animals.

After assessing the case, Best Friends staff decided that the best way to help would be to rally the extended Best Friends family in the area where the cats were living. Messages went out to 6,000 nearby Best Friends members, and soon additional help started coming in.

Safe haven for all cats 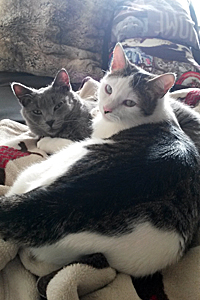 One volunteer was Julia Rivera, a veterinary technician who went out to the farm every week to lend a hand with the cats. She met Troy, the gorgeous cat with the multi-hued coat, and felt that she could help him warm up to people. Julia has worked with many under-socialized cats over the years, so she knew that with patience, Troy could learn that people aren’t so bad.

At first, he would wince when she offered him her hand to sniff, but then he began to come around. “When you finally were able to touch him, he absolutely loved it,” says Julia. After weeks of friendly interactions, and with foreclosure on the property looming, she took Troy home. “It melts my heart that he now looks to me to pet him,” she says.

And by the time the property had to be vacated, all the cats had found safe haven. Joyce says, “I have always believed in Best Friends’ no-kill mission. We proved that you can Save Them All.”