Image
Best Friends divvies up large kibble donation from American Nutrition to help pets around the country.
By Denise LeBeau

“I see about a dozen to 20 of the cats from our colony during breakfast time, but I’ve never seen them go this crazy for dry food,” says Andrea Dion of Salt Lake County. Every morning, Andrea heads out to care for the cats she feeds, rain or shine, even though the cats aren’t hers. In fact, the cats don’t belong to any one person; they simply live outdoors in the community. Without Andrea’s dedication, they’d be left to fend for themselves. Every day, across the country, other caring people just like Andrea do the same work — on their own time and their own dime. That’s why when Best Friends received a generous donation of cat food from American Nutrition, the choice of what to do with it was crystal clear: Give it away. 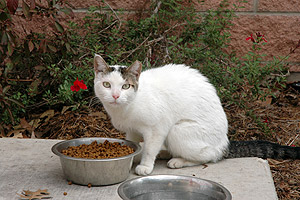 The donation from American Nutrition totaled 30,000 pounds of dry cat food. It’s a massive amount of food, but demand is great because community cat caregivers like Andrea have to buy food at full retail cost if there aren’t low-cost or free options. That’s where Best Friends’ outreach programs and No More Homeless Pets Network partners come in. Three separate truckloads of food were dispersed, with the overall goal to get the food to those who need it most.

A portion was allocated for Best Friends’ Four Directions program, which, in addition to performing trap/neuter/return (TNR) services, supports a few thousand cats near the Utah and Arizona border by giving out food to their caregivers to supplement what the caregivers provide themselves. The Four Directions program must budget its money toward spay and neuter first, and with over 100 people looking for cat food in any given week, sometimes driving a few hundred miles to pick up cat food, demand is high. Every piece of kibble counts. Several thousand pounds of kibble will keep kitties’ bellies full through the winter months.

The perks of partnership

Andrea has been doing TNR in her area since 2009, when she started her own rescue group called Ear Tip Ranch (named for the standard and painless practice of removing the tip of a community cat’s ear after being spayed or neutered, so caregivers know at a glance that a cat has been fixed). The group has become part of the no-kill solution by trapping, neutering and returning dozens of cats.

Andrea also enrolled her group in Best Friends’ No More Homeless Pets Network. As a Network partner, Ear Tip Ranch can take part in Best Friends’ events and fundraisers (among other things), and they were eligible to receive food from the large donation. Andrea says the cat food donation will not only help feed her colony of about 50 cats, but will also free up resources to fortify her cat shelters for winter and aid cats with medical issues.

Other Network partners used the donated food to stock their pet food pantries. Sometimes being unable to afford food is the last straw that leads to people giving up their pets to a shelter because they don’t have money to feed them. Free pet food keeps those pets in their homes and out of shelters.

The donation was spread far and wide, giving a boost to folks who do a job not for pay or recognition, but just for the pure love of animals who don’t have anyone else to look after them. With dedicated people doling out food to cats who can’t get it elsewhere, 30,000 pounds of kibble goes a long way.

Support your local Network partner with a community cat program. Click here to find one near you.