Image
Though she was once someone's pet, this domestic rabbit was abandoned outside. Without survival skills, she was in grave danger.
By Christelle L. Del Prete

Page is a bunny who really bounced back. When Page was found hiding under a trailer in someone’s yard, she was frightened and acted like she didn’t want to be caught. And Page had a right to be scared. She was in grave danger. The three-month-old domestic rabbit had been abandoned and was left outside to fend for herself. Whether she’d escaped or had been let go by someone, her chances of survival in the great outdoors were slim. Until, all of a sudden, everything changed.

Born to be a pet 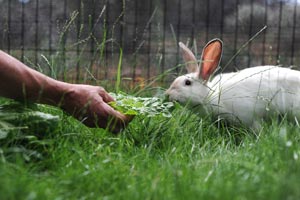 With all of their natural predators (birds of prey and coyotes, not to mention parasites like fleas and ticks), even wild bunnies don’t have a very long life expectancy. But Page was no wild bunny.  She’d been born to be someone’s pet and had no idea how to find food and water on her own — not to mention, it was hot out there. A rescue effort was launched and soon, Page was on her way to Best Friends Animal Sanctuary.

Best Friends’ caregivers and veterinary staff examined her, got her fleas under control and treated her tick bites. Aside from those few discomforts, the young rabbit had escaped from her misadventure physically unscathed, though a little traumatized. She was very lucky. She was in good health and, once she was around people, even started to be a little friendly.

Rabbit is “the sweetest girl”

“She is the sweetest girl and has a very calm personality,” says Cheryl Day, one of Page’s rescuers. “I picked her up and she snuggled right into my neck.”

The loving bunny certainly did settle into Sanctuary life quickly. It was clear she was relieved to be safe and well cared for. As soon as her quarantine period was over, she ran around happily in a big enclosure at the Bunny House and began interacting with volunteers.

In spite of how scared she’d been during her rescue, the super cute and friendly bunny wasted no time charming her visitors. “She would approach people who offered her food and eat lettuce and cilantro right out of their hands,” says Bunny House manager Jason Dickman. She also loves to sit on people’s laps and have her head gently petted. In fact, that became her very favorite thing at the Sanctuary and, eventually, she became a volunteer and visitor favorite.

A 180-degree turn for bunny 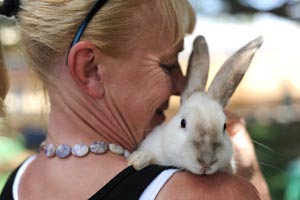 Now, Page is experiencing something she’s never had before. She’s spending time in a loving foster home where she gets plenty of her favorite things — affection and food. She has completely recovered from her ordeal and is flourishing. It’s a 180-degree turnaround for a “pet-pretending-to-be-wild” bunny who is now safe and pampered.

Find out about life for the bunnies at Best Friends