Abandoned pig rescued from the desert

Image
After being rescued, pig gets help at Best Friends Animal Sanctuary. She is doing very well with all types of animals, but doesn't like other pigs.
By David Dickson

Scarlet Lilly the pig knows how to make friends easily — so long as you’re not another pig, that is. If you happen to be a dog, cat, parrot, chicken or human, or probably a wide variety of other critters, Scarlet Lilly would love to make your acquaintance. Nobody knows for sure why she has a thing against other pigs. 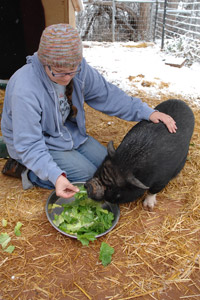 In fact, not much is known for sure about Scarlet Lilly. This sweetheart was found abandoned in the wilderness. A hiker spotted her along a hiking trail in Southern Utah. Not knowing what to do with her, he put a notice on Craigslist that there was a pig in the vicinity. Soon, others chimed in on the Craigslist entry saying that they’d seen her there as well a couple weeks earlier.

In other words, poor Scarlet Lilly had to fend for herself in an area without easy access to food and water for weeks. "It’s amazing she was alive," says Best Friends caregiver Adria Johnson, one of the rescuers who picked up Scarlet Lilly.

Back from the brink

The rescue team found Scarlet Lilly hungry and severely dehydrated. Her feet had also clearly been neglected for at least two years. It had been a long time since this pig had been properly cared for. You’d think she would have a major chip on her shoulder toward humans. The thing is, though, she’s as loving as they come.

"She is by far the sweetest pig I’ve ever met," Adria says. Scarlet Lilly moved in with Adria’s family as a foster pig until she could move up to the Sanctuary. On the very first day, Adria’s two-year-old son hugged Scarlet Lilly. She nuzzled right back. "She loved him to death," Adria says. 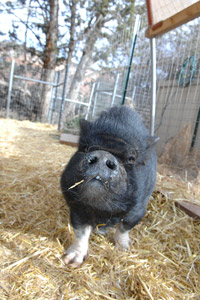 During her foster stay, Scarlet Lilly proved that she gets along great with dogs, cats, parrots, even chickens. Though Scarlet Lilly was given the run of the house — she did fabulous inside, by the way — she also visited the fenced-in chicken area outside by day. One night when it came time to bring in Scarlet Lilly, they found her curled up next to the chicken inside the coop.

Life is looking up

She might have once been abandoned in the middle of nowhere, but her luck has certainly turned around. She’s doing tons better these days, with her feet trimmed, her food dish full, and friendly people all around to help her feel healthy and happy.

Once she was able to come live at Best Friends, Scarlet Lilly wasted no time gaining popularity with everybody she met. She has the most captivating big brown eyes you’ve ever seen. They pull you right in.

Soon she started in on the sleepover circuit, too, earning glowing reviews right out the gate. One family described how she would follow them around from room to room, trying to stay as close to them as possible.

An excerpt from their sleepover evaluation notes speaks volumes: "When she would wake up and we weren’t petting her, she would come over and rest her chin on the bed until one of us would get up and give her a belly rub."