As a busy young professional, Jazmine Garcia has a long daily to-do list. But at the top of that list every day is loving her dog Herman, who she adopted from the NKLA Pet Adoption Center in Los Angeles.

In fact, Herman has been the center of Jazmine’s heart from the very first time she saw him. The fact that he had medical challenges didn’t deter her from adopting him. Instead, it only made her more determined to make every day of Herman’s life a beautiful one.

When Herman arrived at the Best Friends Pet Adoption and Spay/Neuter Center in Los Angeles back in September, he was in rough shape. The poor senior dog had lost his home and ended up in a Los Angeles city shelter (where all pets at the center come from), and it was clear he needed quite a bit of love and expert care.

His fur was matted and dirty, his belly was bloated and he had lots of fleas. But an examination by the medical team showed Herman needed more than a just a good bath and a little rest.

“He had quite a few medical concerns that our medical staff started triaging,” says Dr. Nicole Petschauer, the center’s senior veterinarian. "His eyes and ears were severely infected, and he was lacking some coordination in his front and hind limbs.”

Soon after the medical team started treating Herman, he began to feel a lot better. But still, they knew Herman would need to be adopted by a person dedicated to continuing the dog’s medical care and testing in order to fully understand the extent of his medical issues. But one thing was certain. There’s a family out there for every pet, and someone would fall in love with Herman.

Once he was feeling better, he was moved across town to the NKLA Pet Adoption Center in West L.A., which houses Best Friends pets as well as those from other NKLA Coalition members. The team there got to work finding Herman the perfect home. In the meantime, he gained many fans, acquired a whole lot of homemade bow ties, and had lots of sleepovers in the homes of adoring volunteers. 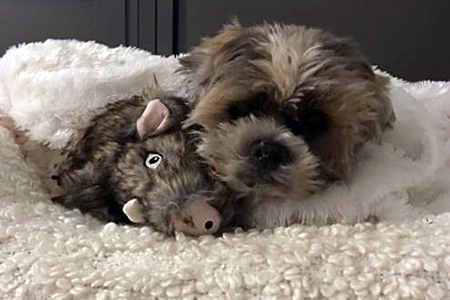 A life-changing and lifesaving meeting

One day, Jazmine decided to stop by the adoption center to see if she could find a playmate for her one-year-old dog, Prince. But a funny thing happens when you pop by a pet adoption center: The chances of leaving empty-handed are highly unlikely. Jazmine says that’s what happened as soon as she met Herman. “I saw a lot of dogs that day,” she says, “but he was the cutest.”

Jazmine was pretty much all-in at that moment. But she wasn’t so sure Herman felt the same way, because he approached Jazmine slowly at first. But then he began wagging his tail. She fell in love right there.

The adoption team explained to Jazmine that Herman would need ongoing medical attention, reviewed his records with her, and suggested that she foster Herman for a week to see if it was a good match. But Jazmine had already made up her mind. Herman was going home with her that day. And that’s where he’d stay.

“Everyone was so overjoyed when Herman found his new home,” says Erin Olsen, NKLA adoption center manager. “This is such a great reminder that there is a wonderful home for every animal, regardless of age or medical status.”

Only love for an elderly dog 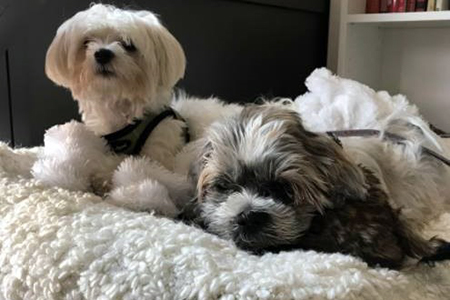 Once he was home with her, Jazmine took Herman to her veterinarian, who could pick up where the Best Friends medical team left off. The vet determined that Herman’s symptoms were probably from Cushing’s disease, caused by an excess of hormones from the adrenal glands. It can be managed with a special diet and medication, which Jazmine is happy to provide. And he gives her so much love in return.

"He loves to be as close to me as possible,” says Jazmine. “Sometimes he’ll stand and stare at me until I come over and hold him and give him love.”

On most days, Herman is greeted in the morning with a few licks from his new brother, Prince. Then he likes to stroll in the dog area at Jazmine’s apartment complex. In the afternoon, he’ll usually lay in the sun in the yard or go for a ride in the stroller that Jazmine has for the days when he doesn’t feel like walking. And at night, he cuddles on the couch with his mom and Prince.

Jazmine says Herman has taught her to slow down and take it easy. “He can’t play that much,” she says. “But he shows me that just being near him is enough.”

The most rewarding experience

When Jazmine tells her friends and family about life with a special-needs senior dog, some of them ask why she didn’t choose a younger dog who wouldn’t require so much extra care. But Jazmine has a great response for them: “I tell them it’s been the most rewarding experience to be able to give him a beautiful life outside a shelter.”

Herman may not have a long life ahead of him, but Jazmine is making sure every day is beautiful. “He is safe, warm, peaceful and loved,” she says. “His very presence is something I don’t think I ever realized could be missing in my home." 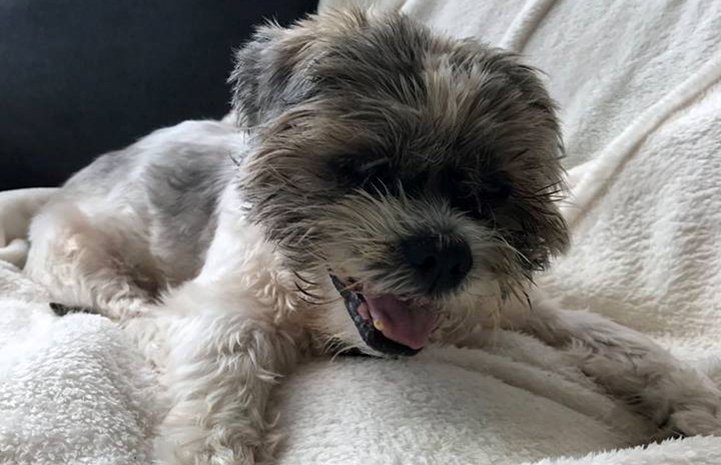