When Allison Arnold and her partner moved into their new house, they took a look at the big backyard and knew what they had to do: adopt another dog. So, they hopped on the Best Friends website, and that’s where they saw a puppy with floppy ears and light blue eyes named Sailor.

There’s no denying that Sailor’s a cutie. But those baby blues and his big grin weren’t what made them decide to meet him. What really drew them in was the fact that he can’t hear. As a speech pathologist, Allison has worked with many kids who are deaf or hard of hearing, and she was intrigued at the prospect of helping a puppy navigate a world without sound. 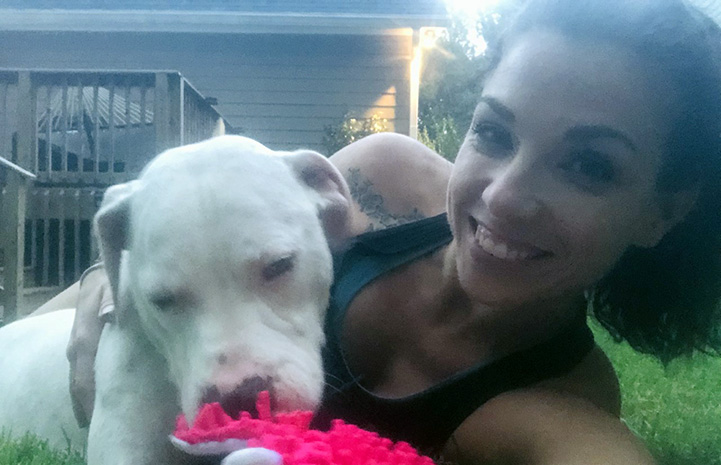 Getting everyone on the same page

“Sweet, but a handful.” That’s Jessica Krueger’s description of Sailor when he first came to Best Friends in Atlanta from a shelter in south Georgia. Of course, Jessica and the team expected this. He is, after all, a puppy. But Sailor’s inability to hear posed some additional challenges when it came time to train him.

“It was hard to determine what he understood,” says Jessica, manager of lifesaving programs for Best Friends in Atlanta. “We gave him lots of interaction and the team worked hard to help him adjust.”

A staff person came up with the idea to mitigate Sailor’s lack of hearing by teaching him American Sign Language (ASL). She printed out handouts about training deaf dogs and using hand signals, and hung them near Sailor’s area.

Having the printouts on hand at the center ensured that everyone was on the same page and teaching Sailor the same things. Since he’s a very smart dog, he picked up ASL quickly, which made it easier for the team to begin working on all the typical things puppies need to learn. That said, working with Sailor was challenging.

“All of his toys had to be picked up prior to training, as he would get distracted and want to play, which is typical for an 11-month-old puppy,” says Megan Matchett, adoption specialist. But since Sailor can’t hear, he learns by seeing cues; and with toys around, that just wasn’t going to happen.

“At first, it was difficult to get him to see anyone giving him the ‘look at me’ signal,” says Megan. But that didn’t last long. Eventually, he learned that paying attention to what people signed rewarded him with treats and play time. 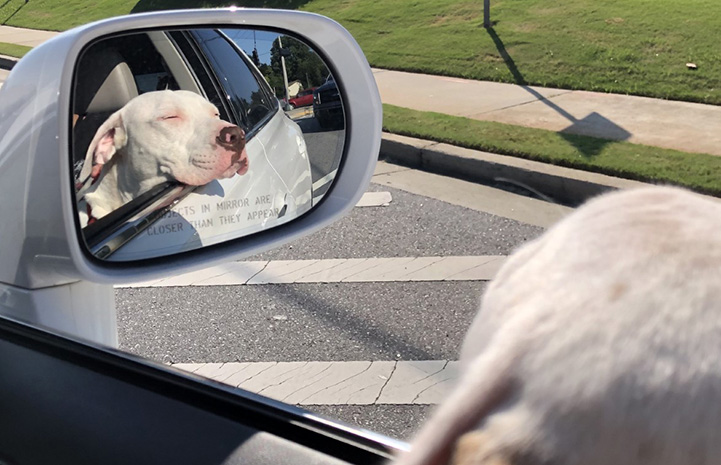 Once he understood commands a little better, Sailor went to a foster home where he continued to hone his ASL skills and learn how to channel some of his puppy enthusiasm. It wasn’t long after that when Allison and her partner first saw his adorable face on the Best Friends website. They were smitten.

When they learned Sailor would be making an appearance at an outdoor adoption event later that week, they marked their calendar and made plans to meet him. Today, when they look at that date on the calendar, it’s even more important because it’s the day they decided to adopt him. Allison says, “Who wouldn't love that goofy smile and the way his whole-body wags when he meets you?” 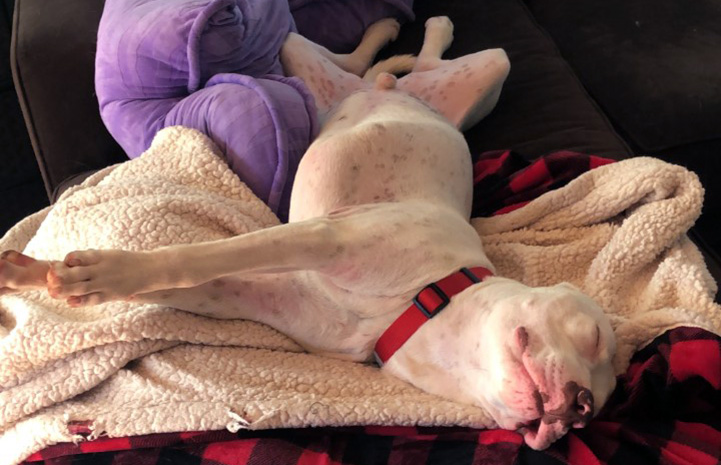 Allison knew there would be an adjustment period before Sailor got used to his new home. The first week was especially challenging, but she had the perfect remedy. “What helped the most during this transition period was patience, creativity and a lot of laughter,” she says.

It wasn’t just Sailor who needed to get used to some big changes. Allison and her partner had some adjusting to do, too. Sometimes, they forgot that he’s deaf. “I don't know how many times we caught ourselves calling for him or telling him ‘good boy’ like he could hear us,” she says.

At first, there was a lot of hand-waving to catch Sailor’s attention (and maybe more treats than are usually given to reinforce his good behavior). But the more Sailor settled in, the more Allison began using ASL to communicate. It goes without saying that being a speech pathologist has helped in many ways.

Since Allison has worked with many hearing-impaired and deaf children, she can determine when to use ASL instead of their own, made-up hand signals. Beyond this, she says her experience has helped her understand how important it is for people and animals without hearing to have someone to take the time to understand and communicate with them.

What Allison loves most about Sailor is his personality, which proves there’s a lot more to him than his special needs. Playful and energetic, he has brought his own brand of comedy to his new home. “Nothing seems to faze him at all,” says Allison. “He can accidentally fall off the couch or slip and slide down the stairs and get up without missing a beat.” 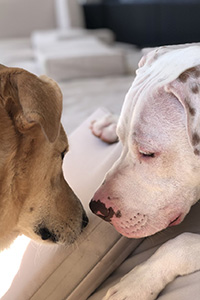 Sailor also loves his dog siblings, especially the 14-year-old Boston terrier. He’s respectful of her mature age. Instead of roughhousing with her like he does with the others, they’ll have stand-still "bark-offs." With their other dog, he backs up into them to play, using his wiggly booty to playfully push them around. “He looks like he’s stuck in reverse,” says Allison.

Thanks to his insatiable curiosity, Sailor has managed to figure out how to open the shower door (when it’s in use) and has learned that humans make the best pillows. “One of his favorite things to do is take a nap in our laps, even though he can barely fit,” says Allison.

Sailor is also teaching Allison a lot about tenacity. “His deafness doesn’t hold him back from anything,” she says. “He just adapts and continues enjoying life. That's exactly what we should all be doing as well.”

There are days when Allison admits she gets a little sad knowing that Sailor (renamed Thomas because it’s a word that’s easier for him to read when people say it and sign it), will never hear them say he’s a “good boy.” But they make sure he knows it every day, in every other way possible.

Foster, volunteer or adopt a pet from your local shelter and save lives.