Image
One man fosters and then adopts FIV cats, and in the process becomes an advocate for them, setting the record straight about the feline immunodeficiency virus.
By Best Friends staff

When Brad Raum approached his local shelter and mentioned he was available to foster cats, he couldn’t have known at the time what a change that would ultimately bring to his life. As a bonus, several cats right now are sure glad he went down that path! 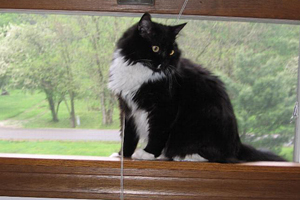 The shelter, located in Salem, Oregon, where Brad lived at the time, asked if he would consider fostering an FIV-positive cat. At the time, this was the only FIV cat at the shelter. Brad already knew enough about FIV not to fear it. He agreed, and Buddy the cat went to live with Brad. A little later, another FIV cat came along and the shelter asked if Brad would mind adding one more. Nope, he didn’t mind a bit. He fostered the second cat, who was later adopted into a different home, and then yet another FIV cat hit the scene. Since the second cat had found a home, Brad agreed to foster Stevie, the third cat.

Then came a shift. Brad was moving to Newbury, Ohio. He knew from experience how hard it can be for FIV cats to find homes. As such, he decided to adopt Buddy and Stevie and take them with him to Ohio.

Along this journey, Brad has answered all sorts of questions about FIV from people unfamiliar with the condition. For instance, they wonder if FIV can be transferred to people or to dogs (answer: no). Brad ends up crushing a lot of rumors. "It doesn’t bother me in the least to have an FIV cat over a non-FIV cat," he says. "They can live longer, healthy lives, too. You just have to keep an eye on them." 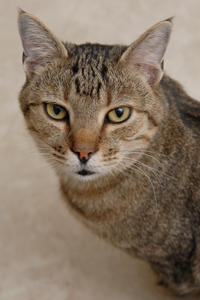 Speaking of long lives, Buddy was well into his upper teens when Brad adopted him. He passed away not long ago, having lived a full, happy life there at the end with Brad and Stevie. However, Stevie, a much younger cat, found himself needing a pal. That’s when Brad decided to check with Best Friends.

A potential adopter looking for an FIV cat is music to an adoption coordinator’s ears! Sad to say, FIV cats still have a bad reputation and have a rougher time finding homes. Best Friends adoption coordinator Larry Donoho spoke with Brad about Baby Shavo, a youngster of an FIV cat who, as it turns out, looked quite a lot like Buddy. "I’ve always loved tabby cats," Brad says. He decided that Baby Shavo, or just Shavo these days, was the ideal fit. He chose to adopt! Yet the happy endings didn’t stop there.

As it turns out, Shavo had a special friend back at the Sanctuary. Spencer, another FIV cat, who lived in the same building as Shavo, which is the office area for the Community Animal Assistance folks at Best Friends. Shavo had been a little uncertain about things when he first came to the Sanctuary, but Spencer showed him the ropes. By the time Shavo was adopted, he and Spencer had just started wrestling together and chasing one another around the building.

Not long after Shavo went home, Brad saw some video footage of the two cats playing together back at Best Friends. He realized how close they’d become. While Brad never set out looking to adopt three cats, he knew how hard it was for them to find a home. He decided there was room for one more! Spencer came home only a couple weeks after Shavo. The new arrangement works out perfectly. "They all three get along," Brad says. "They’re funny. They take turns chasing each other around the house!"

In the end, Brad’s simple decision to help out a shelter back in Oregon ended up changing the lives of several cats who all needed somebody to take a chance on them. 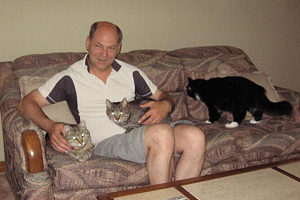 As for Stevie, he couldn’t be happier with his two new roommates. One of his favorite games is to pounce on them while they’re taking a nap, and then go for a huge game of chase through the house once they wake up. Well hey, if you’re lucky enough to have a home to play tag in, what’s the point in letting it go to waste? Congrats to all!

If you're looking for a great companion cat, look no further! Best Friends has some of the most wonderful kitties around.

You can also help out our cats by sponsoring one of our fabulous felines.