Image
Jeff and Stacey Clark are volunteers who specialize in helping and advocating for timid dogs.
By Jennifer Hayes

While helping the animal welfare organization that brought their two beloved dogs into their lives, Jeff and Stacey Clark also learned about Best Friends.

A few years ago, the couple volunteered to help Jersey Animal Coalition, one of the groups participating in Best Friends' first-ever pet super adoption in the tri-state area. Though they did not return home with any additional four-legged friends, their interest was piqued. After learning more about Best Friends, they scheduled their first trip to the Sanctuary, and they've been coming back ever since. 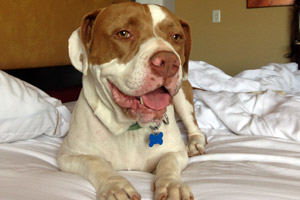 They're dog lovers at heart, so have volunteered exclusively at Dogtown during each of their four trips. And sure, they love working directly with the dogs, but also welcome the opportunity to help in any ways needed.

Jeff feels that non-traditional jobs to care for the Sanctuary are just as, if not more, important than working directly with the dogs. So on a recent trip, he assisted with some of the maintenance duties, particularly helping clear some of the overgrown areas, providing safer enclosures for the canine residents by eliminating snake hiding places.

But don't think the couple makes their annual pilgrimage to Best Friends solely to pull weeds. They cherish one-on-one dog time, so make a point to take a dog on a sleepover each night. This year, Pepsi was one of their guests.

Picture a pit bull terrier and basset hound mix, with stubby legs and a big, goofy smile. That's Pepsi. And as his name suggests, he's got a bubbly personality. One evening, the three of them were seated for dinner on the patio of one of the local restaurants. They quickly discovered Pepsi was far more interested in making friends than his bowl of water.

Every time someone sat down, Pepsi wanted to head over to say hi. "Anybody - men, women, and children of all ages - he was just a love bug and wanted to see and greet everyone," Stacey recalls. 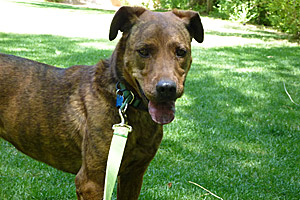 However, not all the dogs at Best Friends are so outgoing. It's the shy ones that Stacey gravitates toward. And though each pup they encounter at the Sanctuary holds a special place in their hearts, one sticks out above the rest.

Last year, the couple took every opportunity they could to visit with Raisin. Because she was so shy, the extra socialization helped a lot - and as they discovered, came with an unexpected payoff.

A sleepover, a trip to the dog park, and an outing to Angel Canyon's underground lake with Raisin provided lots of time together. However, it wasn't until one last visit to their hotel that Raisin blossomed. For the first time ever, Raisin came to Stacey on her own volition, and apparently she meant business. Rather than walking around, the attention-seeking pooch took the straightest path to Stacey - right over the coffee table. And then when they said their final goodbyes at Dogtown, Raisin brushed her nose against Stacey's hand. That gesture of trust and affection brought Raisin's caregiver to tears of joy.

It was Jeff and Stacey's turn to be overjoyed this year when they heard Raisin was adopted.

Back home, in addition to volunteering for Jersey Animal Coalition, the couple has participated in Strut Your Mutt and helped the FernDog Rescue Foundation, a Best Friends No More Homeless Pets Network partner.

However, they recently moved from their small apartment in Montclair, New Jersey, to a home in Woodstock, New York, and that means two things. First, they've already started volunteering at a new, local animal shelter, the Ulster County SPCA, which is also a Network partner. Secondly, a larger home with a two-acre yard means they now have room to adopt a third dog. They're scheduled to return to Best Friends in May 2014, so caregivers can start making their lists of potential adoptees now. Remember, Stacey likes the shy ones.