Image
A black pittie with leash frustration who needs to be the only pet turns out to be one adopter's dream dog.
By Christelle L. Del Prete

Ebony has waited all her life for a forever home, but when it came to finding one, the deck was always stacked against her. Through no fault of her own, she had physical qualities and behavioral challenges that, sadly, shrank her pool of potential adopters. Ebony was one of those dogs who needed a very special home — the kind that comes along once in a lifetime. But after getting help at Best Friends, spending time in a prison trained dogs program and then getting noticed through one of Best Friends’ adoption promotions, Ebony finally got her happily-ever-after home.

Ebony’s journey home has been long and full of hurdles. She’s the kind of dog people often overlook in shelters, and she had to work on a few things before people could see her for the true gem that she is. The first thing holding her back were a few of her physical characteristics. As a pit bull terrier mix, Ebony is one type of dog that in recent decades has been unfairly subjected to stereotyping, prejudice and breed discrimination. As her name implies, Ebony is also black. For some reason, black pets often wait longer than their lighter-colored counterparts to find a home. Finally, after years of waiting for a home at a rescue group in Las Vegas, coupled with the time she’s spent at the Sanctuary, Ebony was a senior.

Physical features aside, the main challenges standing between Ebony and her perfect home were a few behavioral and personality quirks. She doesn’t get along with cats or other dogs, and she can’t live with either of them. She is also reactive when she’s on a leash, which means that she tends to bark, snarl, growl or lunge at other dogs when she sees them. That made walking a challenge for her because she would get so upset.

To help her relax and to reduce her lead reactivity, Dogtown caregivers began playing a game to teach Ebony how to look calmly at other dogs when they approached. When she spotted another dog and could look at the dog and then back at her handler without getting overwhelmed, she was rewarded with a click from a clicker and a treat. She practiced this with her caregivers until walking became much easier and less stressful. 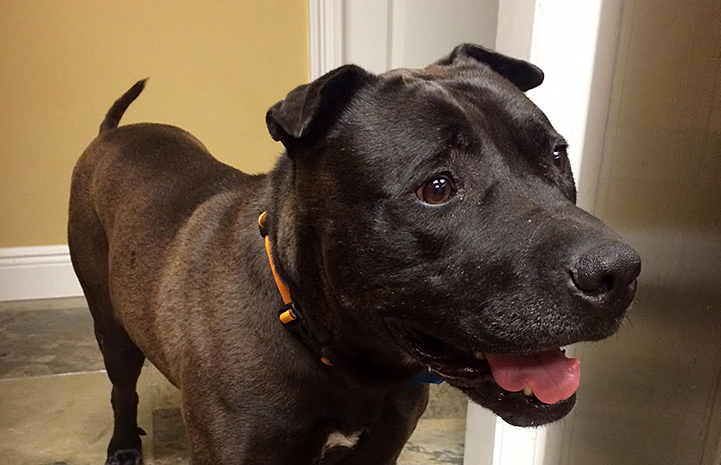 During her stay in Dogtown, Ebony enjoyed some other games that helped improve her self-control. For example, she just couldn’t resist chasing lizards while walking on Dogtown’s trails. Since Ebony isn’t allowed to catch those lizards and seemed frustrated about it, her trainers and caregivers started using a tool with her called a flirt pole — a stick connected to a long, stretchy cord with a toy dangling at the end. Because Ebony could chase and catch those toys (but then would have to drop them before she could play another round), she learned self-control while still getting to indulge her chasing instincts.

Ebony even left the Sanctuary for a short time to take part in a prison-trained dogs program. Her caregivers hoped that the program would give her extra exposure and help her find a home. Sadly, though she completed that program with flying colors, she was the only dog in her group not adopted when she graduated. But no one was about to give up on her, so she returned to the Sanctuary, where staff continued working to help Ebony find a great home.

This time around would be her last, because magic was about to happen. Because many adopters either already have other dogs or want their dog to be social with other canines, Best Friends works hard to promote Sanctuary dogs (and cats) who need to be the only pet in a home. Through an adoption promotion called Solo Artists, adoption fees are waived and adopted pets can even fly to new homes at no cost to the adopter. Ebony became a featured pet in this promotion.

That’s how she caught the eye of Suzanne Edington. Suzanne had watched The Champions documentary, the powerful story of the dogs from the Michael Vick dogfighting case, and that inspired her to adopt from Best Friends. “I also loved Ebony because she was a senior dog and that just pulled at my heartstrings,” Suzanne says. “Puppies are usually the first to go, but old dogs need loving homes, too. Ebony was the perfect fit.” 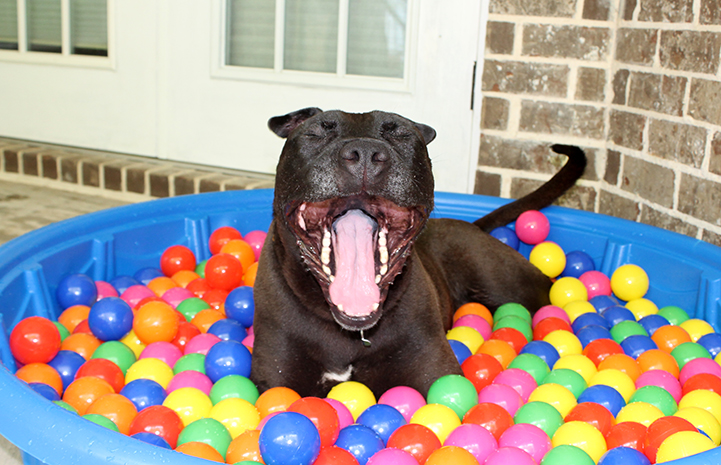 Suzanne also couldn’t have been more perfect for Ebony. Haylee Heisel, one of Ebony’s caregivers at the Sanctuary, says Suzanne is “the kind of adopter who asked all the right questions and accepts and loves Ebony for who she is. It's one of the adoptions that keeps the fire going. It's what we are here for.”

At nine years old, Ebony is finally in a happy home. She’s having a great time walking through her new neighborhood, showing everyone how well-behaved she is on a leash. And she’s having plenty of fun solving food puzzles, going for car rides and diving into kiddie pools filled with colorful plastic balls. In her new home, there’s lots of snuggle time, naps, kisses and belly rubs — all of which she loves. Ebony couldn’t be happier that luck was finally on her side. After all this time, she’s found the complete acceptance and pure love she’s waited for her entire life. 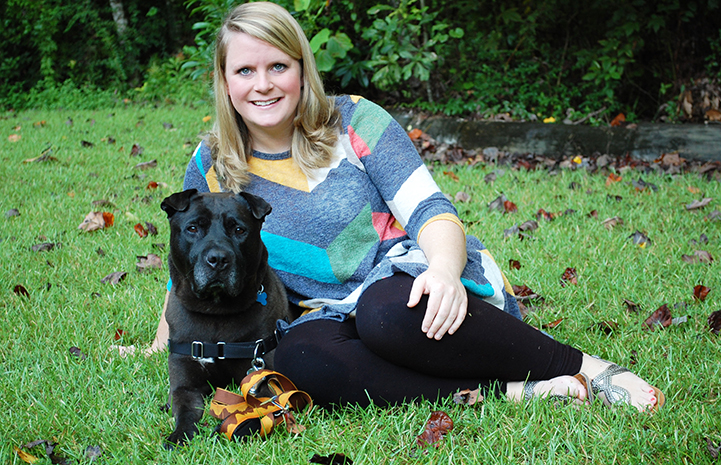