Image
Best Friends residents are proof that no two pitbulls are exactly alike. Each pitbull is indeed an individual.
By  Christelle L. Del Prete

Everywhere you look, there’s conflicting information about pit bull terriers. Sensational media coverage has led to negative stereotypes about, and fear of, pit bull terriers and any dog who looks like them. Shelters and rescue organizations across the country are overflowing with these dogs, and some states and municipalities have even enacted discriminatory laws against them.

But those who know and love pit bull terriers point out that they score similarly well on temperament tests as the average Labrador retriever, and were once known as “nanny dogs”; they were often the first choice as a children’s pet. With all the inconsistent information out there, how can anyone find out the truth about pit bull terriers?

Each dog an individual

A good place to start is with people who have a wealth of experience with pit bull terriers. “These dogs are smart, high-energy, athletic, and they tend to be social,” says Dogtown manager Chris Vergallito. She warns against making generalizations about any breed or type of dog: “We look at our pit bulls individually ... as just dogs, like we do any other breed.”

And there are some pretty amazing pit bull terriers at the Sanctuary, many of whom have difficult, often heartbreaking, backgrounds, who now get special attention to help them overcome physical and emotional scars. Best Friends caregivers and trainers work hard to help these dogs’ true qualities shine. 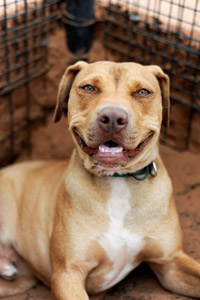 One of these special dogs is Lakota, a two-year-old pit bull terrier mix rescued from a dogfighting operation. Because he was afraid of people and very shut down, Chris and a trainer worked with him in the admissions building for three months. When he moved to Dogtown Heights, Lakota wouldn’t come inside the building no matter how cold it was outside. Caregiver Caley Boone placed two well-insulated doghouses outside for him, and eventually, with time, patience, food and treats, they coaxed him inside.

“He seems to really like people when he is brave enough to interact with them,” says Caley. Now, after five months of love and patience at the Sanctuary, Lakota crawls right into Caley’s lap when she sits on the floor. Clearly, Lakota is learning to trust and to let go of his painful past, and is well on his way to living life to the fullest.

Another Dogtown resident and pit-bull-terrier-like dog is Bruno, who is already living life to the fullest. Bruno is so wonderful with people that he has completely changed the way some visitors view pit bull terriers.

Because of his outgoing personality, Bruno has become a greeter and an ambassador for the Learning Experience, the department at Best Friends that assists volunteer groups and interns. Group coordinator Wendy Gallant shared an anecdote about a young man who told her that he was extremely scared of pit bull terriers. Wendy says in one afternoon “he was won over by Bruno and was comfortable sitting down and letting Bruno love on him.”

Besides being so sweet, Bruno is a great entertainer. The big, muscular, six-year-old dog often amuses people by waiting for someone to lift him into a truck or Jeep, instead of hopping up himself. His caregiver Kathy is teaching him how to ride a skateboard, and it’s clear from his early attempts that he’ll have some great skater moves. 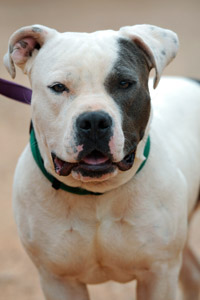 Then there’s Wallie, an adorable gray-and-white pit bull terrier mix who’s built thick, like a bulldog. He came to Best Friends from Kanab Animal Control and used to be quite excitable, but with basic manners training he’s now calmed down considerably and has won over his caregivers and volunteers with his big smile and zest for life.

Local volunteer Justyne Moore often takes Wallie for car rides around the Sanctuary. She’ll stop at Angels Landing, so Wallie can sniff the grass, check out the koi pond, and just enjoy the sunshine on his face. She says she loves “getting Wallie kisses, seeing his big ol’ smile, and watching the joy in his eyes, as (we) drive around the canyon.”

If you want to know all about pit bull terriers, the best thing to do is to meet a few and remember that, just like people, dogs like Lakota, Bruno and Wallie all have their own unique back stories and personalities — and oftentimes, they’re just about the sweetest, silliest dogs a person could hope to meet.

Get more information about adoptable dogs at the Sanctuary.