Image
Trevor Potter, a Best Friends Animal Society volunteer in Salt Lake, goes all out to help pets, doing any and every job.
By Nicole Hamilton

There are specialists, and then there are generalists. And because Best Friends works toward creating no-kill communities around the country, both kinds of people make it possible to save lives every day.

Trevor Potter, a volunteer at the Best Friends Pet Adoption Center in Salt Lake City, is a generalist. That means he has not only learned a lot (about everything from bottle feeding kittens to being a team leader at large events), but he’s also joined a team of people invaluable to Best Friends’ work. The best part is that team is open to anyone who wants to join, and like many others who volunteer, Trevor gained a new four-legged best friend out of the deal.

Trevor’s involvement at the pet adoption center began after he enjoyed a visit to the Sanctuary in southern Utah, and when he learned that Best Friends was doing a lot of work for homeless pets near him in Salt Lake City, he jumped at the chance to help.

His first job, he remembers, was deep cleaning kennels. Let’s just say it’s one of the least glamorous jobs — because it is. But it’s also really important. Each pet enclosure needs to be clean, germ-free and ready to house new pets as they arrive from area shelters, and it takes a lot of time and elbow grease to make it happen. As Trevor attacked the job with gusto and then began taking on new roles when needed, he soon joined the club of dedicated volunteers who help make Best Friends’ work possible and that it runs like clockwork. 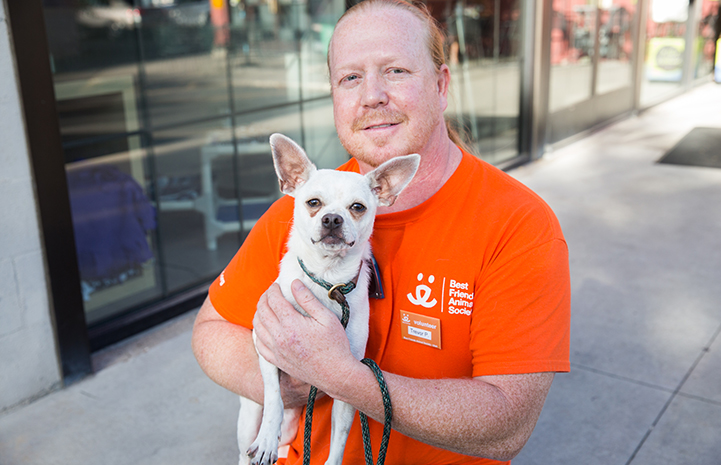 Volunteer learns the skills to help save lives

While it’s natural for people to want to volunteer doing things they have experience with and where they feel most comfortable, Trevor takes a different approach. Jennifer Taggart, national volunteer specialist for Best Friends, says, “Trevor looks for areas at the adoption center that need his help, and then does what he can to assist them, even if it involves learning a new skill.”

Trevor recently learned everything he could about kittens so that he could help the smallest (and often most vulnerable) residents at the center. And when he saw how busy the adoption team was, he got training to learn everything he’d need to know so he could became an adoption assistant and help ease their load.

Round-the-clock dedication to Saving Them All

While most of the work happens during the day and into the evening, sometimes help is needed in the wee hours of the morning. Like recently after the Louisiana floods, when Best Friends helped arrange a transport of pets from flood-affected areas to the Pacific Northwest. The van would be stopping in Salt Lake City for a much needed pit stop, and Best Friends staff and volunteers planned to be there to care for the animals before they’d shove off for the second leg of the trip. When the van was delayed and wouldn’t arrive until 2 a.m., the change threatened to throw a wrench into the plans.

But people, including Trevor, showed up anyway.

“When he says he’ll make something happen, you can consider it done,” says Jennifer. “And he’s also humble. Even though he carries a lot of responsibilities as a volunteer, he still deep cleans kennels without any hesitation.” And when Trevor talks about the 2 a.m. transport event, he gives kudos to his fellow volunteers ― not himself.

Through his work as a volunteer, Trevor has made many new friends, including a very special one, whom he met at a recent Best Friends NKUT Super Adoption. As tent captain at the event, Trevor was responsible for regularly checking all the dogs. One in particular, an American bulldog named Bubba, was ecstatic every time he saw Trevor approaching, and then he looked forlorn when Trevor walked away.

Trevor felt Bubba would fit right in to just about any home, but looks can be deceiving, and this big sweet and gentle dog could look intimidating to some people. Plus, Bubba was an older dog and had recently been diagnosed with cancer.

Trevor waited until the end of the event to make sure others had a chance to adopt Bubba. But he decided that if no one else did, then he would give him his forever home. When the super adoption came to a close, a new life opened up for Bubba. That day, he went home with Trevor, and hasn’t looked forlorn since.

Today, Bubba is healthy. Cancer simply isn’t a word Trevor uses. There is just too much life for them to enjoy together.

Bubba is a source of inspiration to Trevor, who pays it forward in his work at the pet adoption center. “I want to help all of the animals at the center find homes ― especially those who may get overlooked,” says Trevor. “There’s a perfect match for everyone.”

Help Save Them All. Donate today. 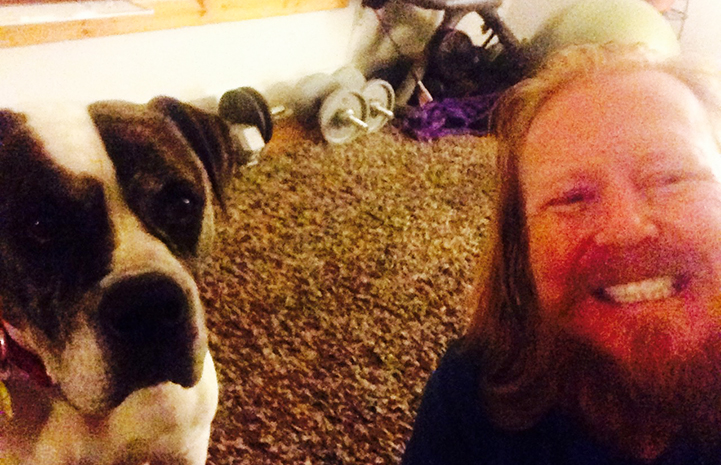