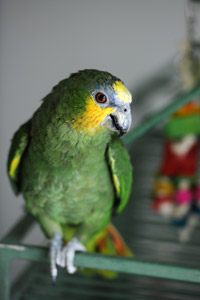 When Joe, an orange-winged Amazon, first came to Parrot Garden about a year ago, he had some pretty severe social anxiety issues. In fact, he declared the area around his cage a "no fly" zone; he didn't want anyone - human or bird - to come anywhere near him. If a caregiver approached, even to provide his daily care, he would put on a dramatic show, flopping around on the bottom of the cage and shrieking frightfully.

His behavior was so extreme that Parrot Garden manager Jacque Johnson feared that he might be beyond redemption. But here at Best Friends, everyone gets a second chance, and Jacque and her staff soon found ways to reassure the frightened bird and make him comfortable in Parrot Garden.

Finding the best arrangement for an anxious parrot

Because Joe wasn't used to being around other birds, he seemed stressed and uneasy in Parrot Garden's general population. So Jacque and her staff moved him into the staff room. It was a little quieter in there, at least as far as other birds go, but Joe still wasn't too thrilled about all the people, and he made his displeasure known.

So his next move was into Jacque's office, where it was quieter still. Gradually, he got accustomed to Jacque and began to bond with her. But once he started bonding, he couldn't stop. Jacque began to worry that he would get so attached to her that he would no longer be adoptable. So she moved Joe back into the staff room, and there his rehabilitation continued. 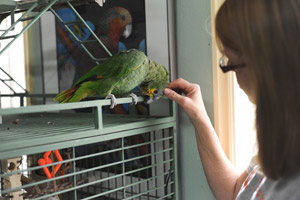 It took Joe a while to get used to people, but Jacque could tell that, before his brief stint with a private rescue group in Mesquite, Nevada, he'd had a home where people loved him. He knows the words "step up" and "head scratch," and he lets Jacque give him plenty of the latter.

Joe's relationship with Jacque is helping him open up to other people as well. Recently, he let caregiver Lisa Englund give him a head scratch, and Brittany Lebel, a five-week intern, decided to make him her project bird. (Interns at Best Friends select an animal to give special attention to; often, it's an animal who needs extra socialization.) Brittany has begun reading to Joe, and says that so far he has responded really well. Though he still stays pretty far away from her, he clearly enjoys the stories and will start to make little noises whenever Brittany stops reading. When she begins again, he'll sit quietly and listen to her voice.

Before she leaves, Brittany plans to read "The Hitchhiker's Guide to the Galaxy" to Joe, and she's hoping that that will earn her the privilege of giving him a head scratch. And, with the way Joe has been warming up lately, there is a good chance of that. "Sometimes they just need a little time," Jacque says. "He is going to make someone a great bird."

Get more information on Joe and the other adoptable parrots at the Sanctuary.