Image
Anxious and reactive dog's world opens up, thanks to careful training and a training game called "Look at That."
By Christelle L. Del Prete 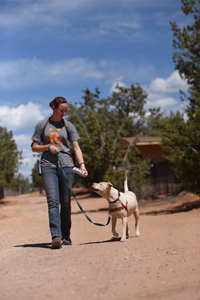 Sprinting across her yard in Dogtown while kicking up red dust behind her, Yuma the dog looks much younger than her seven years. She’s got the energy and build of an athlete, and she absolutely loves walks and long hikes on the trails that wind through Dogtown. But, for Yuma, just going for a walk has been no easy feat. It’s taken her a long time and a lot of hard work to be able to enjoy this simple pleasure.

Several years ago, Yuma ended up in a Colorado shelter. At that time, she was unable to go for walks at all, because seeing other dogs during her strolls would stress her out so much that she’d pitch a fit. She’d lunge and leap in rainbow-like arcs at the end of her leash, all the while shrieking and screaming. It was — to put it lightly — not a great experience for her.

Helping a dog with behavior challenges

Whether Yuma was reacting out of fear of the other dogs, or frustration that she couldn’t get close enough to play with them, the reaction took a toll on her. The poor dog got so worked up that she’d be on edge for the rest of her walk, and she’d often make other dogs nervous as well.

So Yuma came to the Sanctuary, where Dogtown trainers and caregivers have plenty of experience helping dogs overcome these kinds of challenges. Their goal was to get Yuma more comfortable with the world around her so that she could lead a stress-free life. 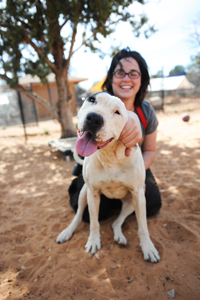 Reducing Yuma’s stress around other dogs turned out to be quite a challenge. The only way she could handle seeing another dog was if the animal was about a football field's length away from her. To be able to safely go for walks on the Sanctuary grounds and, eventually, in a city or neighborhood, Yuma would have to start closing that gap little by little. It was a big, but attainable goal.

Yuma’s trainers and caregivers worked with her using a game called “Look at that.” They’d bring her out of her room on her leash, and take her just to the point where she could see another dog but not yet be upset. As soon as Yuma spotted the dog, the trainer or caregiver would click a clicker and give Yuma a treat. After a bit of practice, Yuma could look at other dogs and instead of getting stressed out, she would look back at her caregiver for a treat.

Getting closer to other dogs

Over time, she was able to get closer and closer to other dogs without feeling upset at all. Now, she can come as close as 15-20 feet without any problem, a big improvement that has changed Yuma’s life. She can go for walks around the Sanctuary, not only with her caregivers and trainers, but also with volunteers. These days, she gets to do a lot more of the things she enjoys most in life — staying active and socializing with people. She’s so good on her walks now and is such a love bug that she’s become a volunteer favorite.

While Yuma’s life in Dogtown has improved dramatically, there’s even more good news. Being comfortable around other dogs means that she can enjoy outings away from the Sanctuary and, eventually, when she finds her forever home, adventures wherever her family wants to take her.

Be a part of the good news for animals by becoming a Best Friends member.