Image
How many blind players would you guess are in major league baseball? Well, none, actually. But that might change if they let cats into the league.
By Best Friends Animal Society

How many blind players would you guess are in major league baseball? Well, none, actually. But that might change if they let cats into the league. 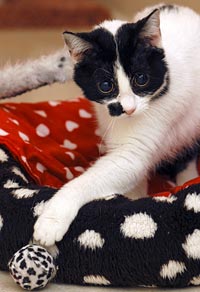 Check out Miss Dot, for example. She is completely blind in both eyes and yet she can pounce on a ball with incredible speed and accuracy. Swoosh! Grab! Mrrrow! The crowd goes wild! When most people see her in action, it’s the same old thing:

The caregiver then wags a finger slowly in front of Miss Dot’s eyes, and she doesn’t respond to the movement.

"Hmmm. Well, you obviously taught her that."

And so it continues. But, honestly, folks, she’s blind. When she came to Best Friends a couple months ago, she felt a little disoriented for a week or two, bumping into walls and other cats. A little while later, though, she found her stride. She also managed to meet and bunk with another blind cat, Sweet William, who is terrified of every cat on the planet except for Miss Dot. He loves her!

Not long after settling in, Miss Dot discovered her supersonic hearing technique for playing catch and has been dazzling visitors and caregivers ever since. If you want to pay her a visit, be sure to bring some peanuts and Cracker Jacks. And a baseball glove.