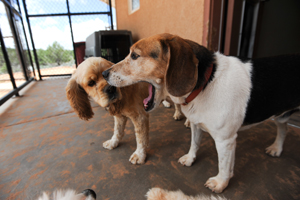 Nine-year-old Snoopy the beagle mix may be a senior, but he’s so fast on his feet you’d never know it. And when it comes to making Dogtown friends in record-breaking time, the adorable dog has almost every other dog beat. While most dogs need a little time to figure out each other’s personalities and play styles, Snoopy just dives right in and makes friends instantly. Perhaps Snoopy is different because he doesn’t want to waste any more time.

He spent most of his puppyhood and young adult years in a small kennel, where he barely had room to move around and never had the chance to run or play with other dogs. Luckily, he found safety and freedom with a rescue organization. But he needed to learn a few things before he could find a home of his own, so he came to Best Friends Animal Sanctuary.

In Dogtown, Snoopy is learning that he'll always be fed regularly and that no one’s going to take away his food, so he doesn't have to guard it from people or other dogs. He’s also learning that it’s pretty easy to make friends here, and that those friends can help him burn off some of his pent-up energy.

Before he had a roommate, Snoopy ran so many laps around his yard that he was starting to wear deep grooves in the sand. So Dogtown caregivers paired him up with a much younger, energetic dog named Sophie. Snoopy was immediately smitten with the pretty little cocker spaniel, and the two became best running and romping buddies.

A Maltese joins the group

All day, Snoopy and Sophie ran, chased, played, and worked on skills that will help them get adopted. Sophie, who’d lost her previous home for being a bit unfriendly with strangers, is learning how to be more accepting of people and how to greet them nicely. Snoopy began taking his meals in his crate three times a day. The “extra” meal helped convince him that food would never be in short supply again, and the crate made him feel safe and protected while he was eating.

As far as Snoopy and Sophie were concerned, things could have stayed the way they were for as long as they were at the Sanctuary. But Snoopy was about to turn a dynamic duo into a terrific trio by including Elf, a young Maltese mix who was living in a Best Friends–New York foster home. The fluffy white pooch came to the Sanctuary for surgery, and, as soon as he was well, he needed a place to live and some doggy friends. 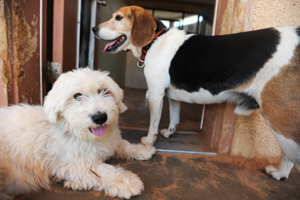 Enter Snoopy, who was delighted to add a new roommate to the mix and didn’t mind having two young pups living with him. Snoopy discovered that Elf likes to run and wrestle as much as he and Sophie do, and that cemented their friendship right from the get-go. “It’s a really fun, playful group,” says Dogtown caregiver Becca Woodruff.

Snoopy and his pals do their part by making sure caregivers never have to worry about the trio getting enough exercise or playtime. Meanwhile, caregivers monitor them to make sure they are taking some healthy breaks, as well as continuing to work on the social skills that will make them wonderful pets once they find their forever homes. By the time that happens, Snoopy will certainly have perfected the fine art of friendship.