Because two FIV-positive cats are better than one

Image
Two cats with FIV show that true friendship can trump any disease. This story has a happy ending with the two felines being adopted together.
By Christina Green 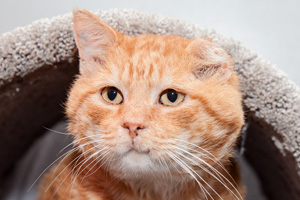 The fact that Sweet Cheeks and Wampum both have feline immunodeficiency virus (FIV) was just about all the two had in common when they first met. But that led to a friendship like no other and eventually, a home together. And their friendship? It’s a unique one.

She’s at it again. The appropriately named Wampum has bopped Sweet Cheeks across his orange face. And, well, he kind of liked it. In fact, the large, scruffy guy with a missing ear always likes it.

Such were the days for this silly duo, who might as well have come from opposite ends of the universe to the Best Friends Pet Adoption Center in Los Angeles. Despite Wampum’s habit of knocking Sweet Cheeks in the kisser (or, who knows, maybe because of it), they became fast, close friends. Best of all, the tradition continues now in their own home together.

He’s a big, scruffy, street-savvy stray with a torn ear who was plucked from the streets by Los Angeles Animal Services (LAAS). Because so many people still misunderstand FIV, it’s harder for cats who have the virus to get adopted. In fact, it can be harder for cats with health problems of any kind to find homes. So Best Friends took him into the Best Friends Pet Adoption and Spay/Neuter Center, which focuses solely on helping LAAS reduce shelter deaths by taking in dogs and cats from the shelter’s six locations around the city.

She’s a petite, somewhat shy, FIV-positive mommy picked up from another section of the city with a litter of kittens. Because the number of kittens inundate and overwhelm the city shelters throughout spring and summer, Best Friends took Wampum and her kittens into the nursery at the center. The little family stayed in the nursery until the kittens were big enough to be adopted, which they quickly were. Then, Wampum moved up into the cat adoption area, where she quickly earned a reputation.

Because she has FIV, she moved into a special room at the center, just for kitties like her. Even though FIV can only spread among cats through a deep bite wound — it can’t magically jump from cat to cat, nor can it be transmitted by petting or even sharing food bowls — Best Friends tends to bunk them together to minimize any potential scuffles that could actually infect an otherwise healthy cat. (We have plenty more information about caring for cats with FIV.)

It took Wampum a little bit to feel comfortable in her new digs at the Best Friends Pet Adoption Center. But one thing she got right away is that people are way cool. She loved getting petted — even rubbing against the window if anyone stopped to look in.

After staying in the nursery with so many little kittens, she also had to get used to her two new roommates — both big boys. Keeping kittens in line was one thing, but two adult males? Well, Wampum quickly came up with a way to let them know who’s boss.

“She uses her paws like hands more than any cat I've known,” says Samantha Bell, cat behavior and enrichment lead at the center. “If the other two were getting more attention than her, she’d give playful little smacks to both. Every time they'd walk by her, they'd both squint in anticipation of the smack, but neither of them minded it.”

After one of the fellows was adopted, Sweet Cheeks and Wampum had the room to themselves for almost a month. And that’s when they perfected their endearing smack, snuggle and purr routine. Because every time Wampum whacked Sweet Cheeks, she’d follow immediately with an affectionate head rubbing.

“I would go visit them at the end of each day as my moment of Zen,” says Samantha. “The loud purring from both of them in that room was so relaxing.” 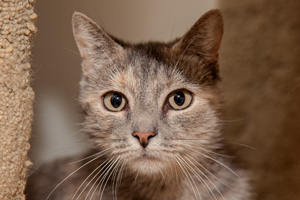 Adopting a cat was on the “settling in” checklist for Davis and her new wife, Ni, after they moved into their Los Angeles apartment. But when they got to the Best Friends Pet Adoption Center late one evening, most of the kitties were already snuggled into their beds—except for Sweet Cheeks and Wampum, who, as you might guess, were up for entertaining company in their humble abode.

“They both came over and greeted us and then they started playing with each other,” says Davis. “It was ridiculous how cute they were together.”

At the time, Davis and Ni knew nothing of the cats’ FIV status. But Best Friends staff told them about their condition and explained what it meant in terms of their lives together.

So, what is it really like to have FIV-positive cats around? It just means the cats shouldn’t roam freely outside, and families should be extra vigilant to provide a healthy, balanced diet and not wait to go to the vet at the first sign of sniffles. Because FIV cats look and act like any other cats, they just have weakened immune systems. So sniffles can digress into something serious faster than normal.

“My first reaction was to think about the possible medical bills, but after talking with the staff and researching FIV online, I realized it’s not that big of a deal,” says Davis. “It’s not like common cat diseases that need daily care, like diabetes or leukemia.” And it definitely wasn’t enough to keep them from adopting both cats.

Davis and Ni decided Sweet Cheeks and Wampum were perfect for their family.

“They’re just like any of the cats I’ve ever had,” says Davis, “but better.” And, yes, Wampum is still keeping Sweet Cheeks in line with her love taps.

Davis says she doesn’t blame anyone for being intimidated by FIV initially. But, she adds, “It’s sad that cats like Sweet Cheeks and Wampum can sit in shelters for so long even though they have such great personalities. It’s just a stigma that keeps them from being adopted.”

While their friendship might be a bit unorthodox, what matters most is that the two kitties now get to look forward to life in their new home together.