Behind the scenes at Dogtown: Grooming and bathing dogs

Dogs at Best Friends get regular positive grooming sessions. This article explores tips and tricks for caring for even those dogs scared of baths.
By Christelle L. Del Prete

Love it or not, grooming is an important part of keeping our canine companions happy and healthy. For dogs at the Sanctuary, it’s no different. Nearly every new arrival will visit one of Dogtown’s two grooming rooms. Once they’re settled in, Sanctuary dogs have regular grooming appointments to keep them looking and feeling their best at their home between homes.

A look behind the scenes in Dogtown’s grooming areas, however, reveals that there’s much more going on than just baths. It’s a much-needed spa experience for dogs who might not have enjoyed such luxuries before coming to Best Friends. And since we cater to each dog’s unique needs, including special grooming for medical conditions, the grooming areas are an important part of Dogtown.

The best way to understand what happens in grooming rooms is to meet a few dogs who’ve recently spent time there. Each has enjoyed a unique “salon” experience. 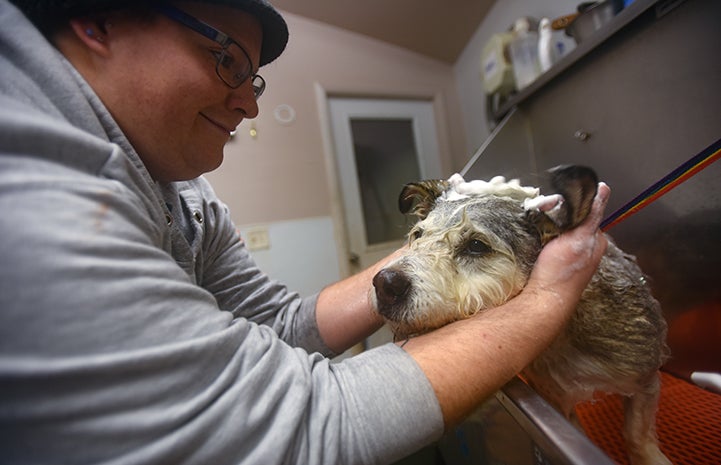 One poor Australian shepherd mix was scratching so much before he arrived at Best Friends that he was dubbed “Itchy.” Mange was the culprit, so in addition to topical treatments, a soothing medicated bath was a top priority.

Once he was in the grooming room, Itchy became the classic dog scared of a bath. Once in the tub, he hunkered down with his tail tightly tucked. So, groomer Alyssa Hill began talking softly and gently bathing the frightened dog. It was dog grooming how-to for first-timer Itchy.

Alyssa says, “Baths can be scary for some dogs, so we try to make it super positive for them, which will help them when they eventually go to their forever homes.”

Assuring Itchy that everything was OK, Alyssa wet down his fur with a small bucket instead of the sprayer, because he seemed more comfortable that way. Slowly, she rubbed the medicated shampoo’s thick lather into his fur. After letting it sit for a few minutes, she gently rinsed Itchy, lifted him out of the tub, toweled him off and placed him in a crate with an attached air dryer. At first, Itchy wasn’t sure about the dryer, but Alyssa chose a low setting and gradually he began to relax as the warm, soothing air dried his fur.

A few weeks after his bath and topical treatments, Itchy looks and feels much better. Though he’s on the list for another calming bath in the near future, he’s not scratching as much. “Maybe we'll change his name now,” says Alyssa with a smile.

Normal grooming for Nochi the dog

Unlike Itchy, an adorable 11-year-old Schnauzer mix name Nochi has been groomed a time or two. He knows the routine, and he knows and trusts Alyssa.

Anyone who’s ever tried grooming difficult dogs (or even easy ones) will agree that grooming sessions are a lot less stressful (and a lot more fun) with a trusting bond between person and dog.

Building relationships with the dogs she grooms isn’t just part of Alyssa’s job. It’s her favorite part. To help accomplish it, she interacts with her grooming “clients” by walking, feeding, training and caring for them outside of the grooming room, so they come to know and trust her.

Since Alyssa was once Nochi’s caregiver, the two already have a well-established relationship. That’s a good thing, because “The Cheese,” as Alyssa affectionately nicknamed him, can be pretty feisty.

In the past, Nochi so objected to nail trims that it took three people (two to hold him still) so that Alyssa could clip his nails. While pedicures still aren’t his favorite salon treatment, Nochi has learned that they go much more quickly if he sits nicely while his trusted groomer does the trimming.

During his baths, which are also part of his routine grooming sessions, Nochi gazes up adoringly at Alyssa, as if to thank her for keeping his long, wiry fur pristine. 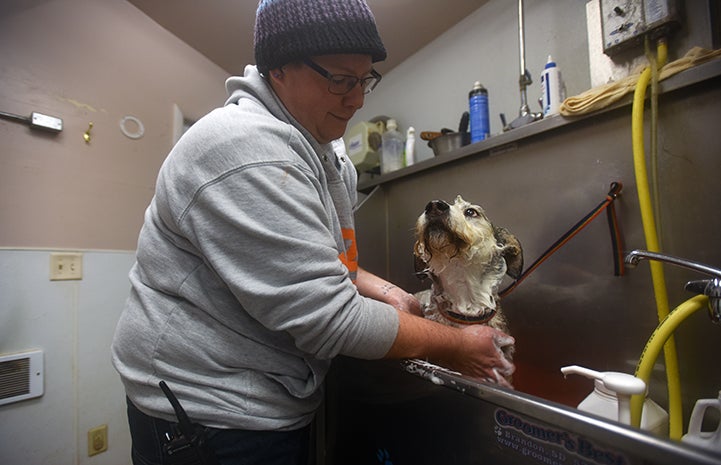 Ralph’s trips to the groomer are never very far apart because he needs frequent help for irritated skin. Recently, a skin infection, coupled with his chronic allergies, made him terribly itchy. So baths not only feel pretty good to Ralph, but they also mean that welcome relief is on the way. All the extra attention doesn’t hurt, either.

Ralph has been hailed as a Dogtown hero. Since he’s so good for medical handling and grooming, he has in the past been a blood donor for other dogs. In that role, he’s helped to save the lives of several Dogtown residents — including a litter of puppies with the parvovirus and several other Best Friends Animal Clinic patients.

While every dog entering the grooming room gets the royal treatment, Ralph is given his hero’s welcome. His medical baths have become fancy high-end spa treatments. For a while, Ralph took daily oxygen-infused baths to deeply cleanse his skin. That helped get rid of the infection and begin the healing. Since he’s feeling better, he’s been able to skip the daily baths, although he still visits the salon a few times a month for allergy relief.

“He’s happy and agreeable,” says Alyssa, who looks forward to Ralph’s grooming sessions. “He loves his baths and tries to hold your hand while you’re bathing him.” 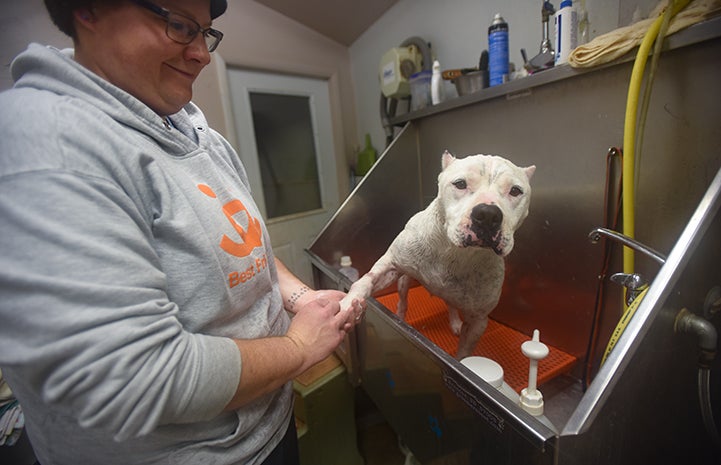 A soft touch and special care

A dog who likes baths as much as Ralph might seem like an exception. But, thanks to the soft touch and special care of our Best Friends groomers, Dogtown residents don’t have to stress when it’s their turn for a salon visit.

When dogs finally emerge from the grooming salon looking and feeling their best, they can right go back to doing what dogs do best: walking on trails, playing in the sand, digging in the dirt and rolling around in the dog park. Then we rinse and repeat until they go to their ultimate destinations: new homes. 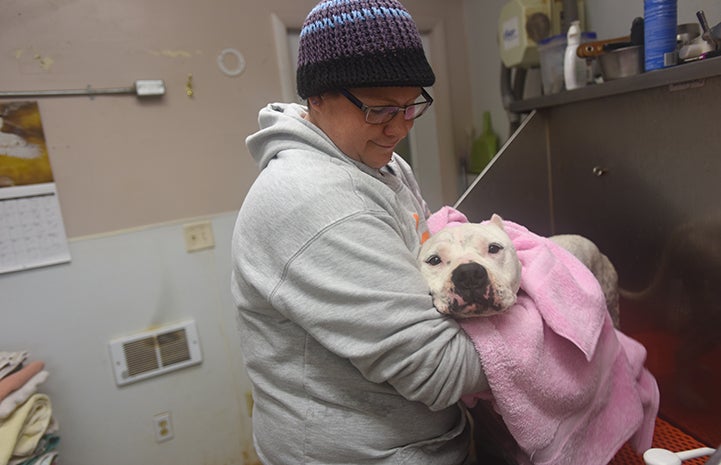