Behind the scenes at Dogtown: Puppy preschool

Each day, as Dogtown volunteers check in for their volunteer shifts, a few leave Dogtown headquarters with a little lavender slip that says “puppy class.” That’s their ticket to participate in a puppy training class in Dogtown’s puppy preschool building.

Puppy preschool is as adorable as it sounds. Volunteers enter a large classroom and meet inquisitive puppies like four-month-old Diwali, a tan-colored Labrador retriever mix pup with a forehead full of adorable wrinkles. Or like Yule, his littermate, who is equally irresistible with big, black-and-white patches on his coat and freckles on top of his nose. 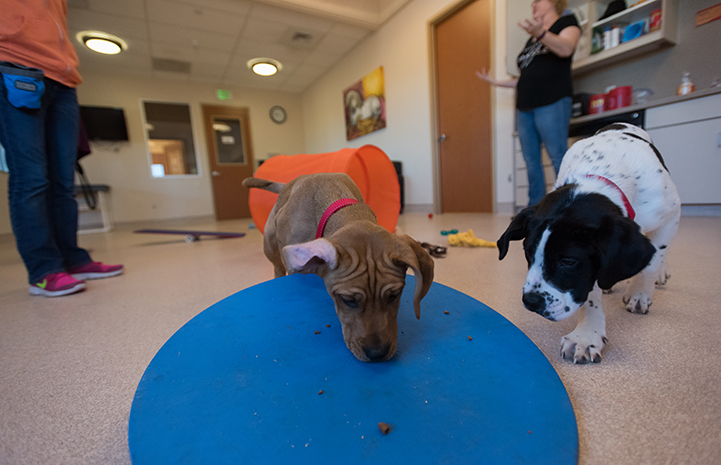 Beyond all the cuteness, there’s lots of hard work involved in puppy preschool. This is where Dogtown’s youngest students start learning the skills they’ll need to be successful in life.

“Our goal here at puppy preschool is to save as many puppies as we can and to give them a decent foundation for the future,” says puppy caregiver Elizabeth Frank.

Puppies are generally ready for preschool either at eight weeks of age if they have had all their puppy shots. If they came to the Sanctuary when they were a little older, they’ll get their vaccines before packing their school bags to head to puppy preschool.

A critical socialization period for puppies

On their first day of school, puppies come into the classroom and start meeting new people and getting treats from them. Once they’ve done that basic class a time or two, they’re ready to move on to more advanced activities.

One morning, Elizabeth brings littermates Takoda and Chumani into the classroom. They are adorable 11-week-old heeler mixes with a delightful spattering of spots on their little bodies. Joining them is Buddha, a shepherd mix who, at 13 weeks old, is already quite the charmer. He has a few classes under his belt, so he knows the drill. He rushes up to greet the morning’s volunteers and sits politely even before he’s asked to do so.

Buddah and his friends are in a critical socialization period that occurs roughly between three and 16 weeks of age. This is why volunteer participation in puppy classes is so important: It gives the pups a chance to meet people of all stripes. Whether they are young or old, tall or short, from down the road or from half a world away, all volunteers contribute to raising well-rounded puppies. Without exposure to as many different people as possible, puppies can grow up to be shy and fearful of strangers.

“People teach children about stranger danger, but we do the opposite with our puppies. We teach them that strangers are good, so they won’t be scared when we send them out in the world,” explains Dogtown behavior consultant Melissa Pezzuto. 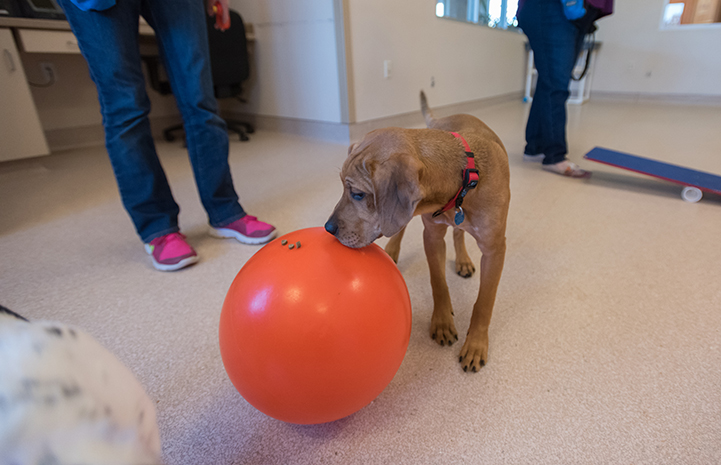 Besides helping them learn to trust strangers, puppy preschool exposes puppies to other potentially “scary” things they will encounter in the world. Puppies at Best Friends are sheltered in the sense that the Sanctuary sits in a remote area of southern Utah, where hearing police sirens or other common city noises is rare. But don’t worry; there’s a “city sounds” CD to help puppies get used to those.

Puppy preschool is also packed with other socialization aides, such as wheelchairs, bicycles, microwave ovens, vacuum cleaners and even singing and dancing children’s toys. To desensitize puppies to the noise of the vacuum cleaner, for example, Elizabeth asks the volunteers to pair off, with two people handling each puppy. While one person holds the pup’s leash, the second person offers the puppy a Kong toy stuffed with yummy filling as soon as Elizabeth turns on the noisy Hoover. When she turns off the vacuum, the treat disappears until she turns it on again. Soon the pups associate the noise with treats.

The very same process is repeated with a fuzzy, mechanical rabbit that sings and dances. When the rabbit starts moving, all three puppies stare at it curiously. But no one barks because they are all too busy enjoying their treats.

“The more things they are exposed to, the less chance they will have behavioral issues in the home,” Elizabeth says.

In a different session of preschool, a big fluffy puppy named Journey practices sitting and lying down on cue. He settles onto a soft mat on the floor, gets treats and then gets more of them for letting his volunteer mentors handle his feet, ears and tail. Finally, Journey plays the “gotcha game,” where a volunteer gently grabs hold of his collar, gives him a treat and then releases him with a “good boy.” When the lesson is over, Journey bounds off for some recess time with his classmates.

Perhaps the most essential lesson puppies learn in preschool is self-confidence. Brothers Diwali and Yule had to wait a little longer than usual before starting puppy preschool because of a minor illness. They recovered fully and were typical puppies, except that because they’d fallen a little behind on their socialization, they were little on the shy and hesitant side.

That just meant that they got to do some extra fun exercises in the classroom to help boost their self-confidence. Caregivers set up some fun obstacles for them, like a bright orange tunnel. Volunteers tossed treats into the tunnel, and soon the puppies were running right through it.

“The tunnel is a confidence-building exercise,” Melissa explains. “After going through it, the pups are often like, ‘Hey, look what I just did,’ because it can be a little scary. If they are scared of something, we’ll put treats on or in it. It’s all a part of getting them used to new and potentially scary things.” 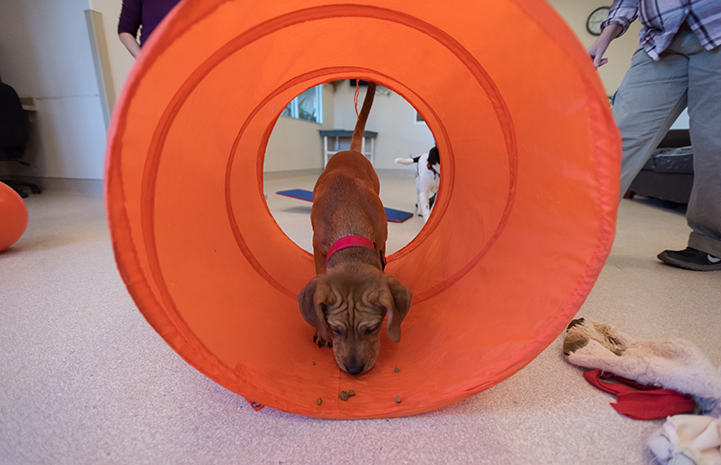 Besides running through the tunnel, Diwali and Yule also took treats off of a mini teeter-totter, a ball and a small, uneven platform — all things that move when the puppies interact with them. It may seem just like playtime, but it helps the puppies learn not to be afraid of new or moving objects.

Puppy preschool students are so adorable that many of them are adopted before they ever “graduate” or move to other areas of Dogtown. When school is dismissed, they leave on solid ground as they prepare to be adopted into loving homes and go out to explore the world. 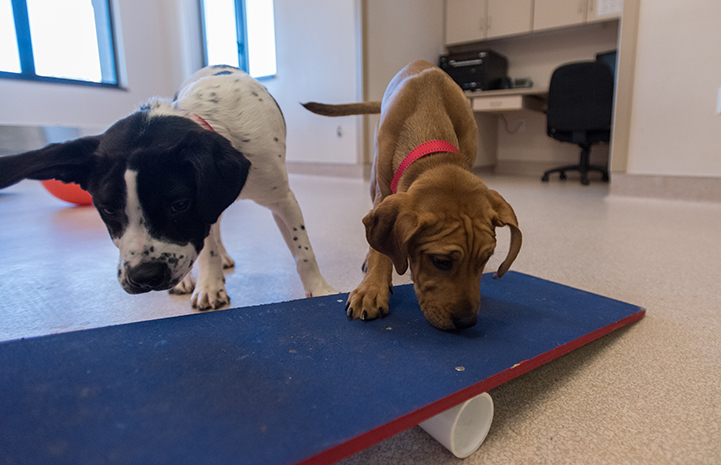 Note: All the puppies mentioned in this article have been adopted.