Benefits of food puzzles for cats

Image
Food puzzles for cats offer many benefits, including mental and physical stimulation and enrichment. Many cats love the challenge and rewards.
By David Dickson

To a human, the concept of a food puzzle would likely not be very popular. If somebody invented a refrigerator, for example, that only opened after successful completion of a complex math equation, it’s a safe bet those fridges wouldn’t exactly be in high demand. (Although, such an invention might allow a few more of us to keep our New Year’s resolutions.)

For animals, however, it’s a different story. More often than not, animals love having a job to do. They enjoy working at a task, especially if there’s a reward at the end. And what better reward than a tasty snack?

Food puzzles offer a variety of benefits. They keep animals mentally engaged, occupy their time, and can help them lose weight, among other things.

Of course, food puzzles tend to work better if they take longer than a few seconds for an animal to solve. Enter Raed, a cat featured on the Guardian Angel section of the Best Friends website. Regular food puzzles are a piece of cake for Raed, says cat manager Michelle Warfle. He can outfox most puzzles in no time flat.

And then along came the "fun board." A generous donor found this device from Germany and sent it to Best Friends. Here at last, Raed met his match. "He’s having to work for it now," Michelle says.

The fun board has five different obstacles for Raed to conquer. Some he can solve with his tongue, others with his paw. All require serious thought. For instance, there are some troughs between wavy grooves of plastic that are too deep for him to reach with his tongue. Raed needs to learn how to use his paw to navigate the food out of the grooves. No simple task. 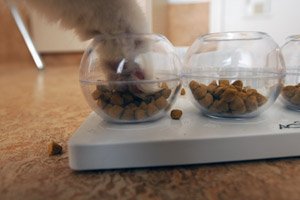 Another obstacle, a set of clear glass jars, required demonstration first from a caregiver. Jenn Strotman placed treats in the bottom of the jars and showed Raed time and again how she could reach in with her own hand to grab the food.

After he still didn’t get it (he kept trying unsuccessfully to use his tongue), Jenn took a more direct approach. "I picked him up and put his arm in there," she says. Finally, he saw the light.

This might sound like a frustrating exercise to a cat, yet Raed was fascinated. "He just purred and was happy the whole time," Jenn explains. He loves a good conquest.

Michelle compares this latest food puzzle to an honors program in school, where Raed has a challenge fitting his aptitude. "He has hit the jackpot," she says.

That said, he’s already figured out two of the five obstacles. Soon, this honors student might need another jackpot. Perhaps a food cupboard with a game of chess on the lock?

Cats aren’t the only animals at Best Friends who enjoy food puzzles. Nearly every animal at the Sanctuary benefits from them. Please consider donating a few to the animals. They’ll be sure and put them to good use.