Image
David Backes, star hockey player on Team USA at the Sochi Olympics in Russia and Best Friends' supporter, has a passion for helping homeless pets.
By Best Friends staff

When Team USA took to the ice February 19, 2014, for its Olympic ice hockey matchup with the Czech Republic, one of Best Friends Animal Society’s strongest advocates for the animals – David Backes – was in the starting lineup.

David, who plays for the St. Louis Blues in the National Hockey League, and his USA teammates then went on to beat the Czech Republic 5-2 and move into Friday’s semifinal against Canada. Team USA is two wins away from a gold medal. 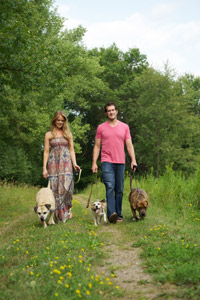 All of us at Best Friends are cheering for David, who off the ice is certainly a star for the animals. He and his wife, Kelly, visited Best Friends Animal Sanctuary prior to the start of the National Hockey League season in 2013. The couple founded Athletes for Animals, an organization of professional athletes who share a passion for helping homeless pets. As one of our celebrity supporters, David is also lending his support to Best Friends’ efforts to stop the killing of animals in our nation’s shelters.

“Animals have always been an integral part of our lives,” says David. “It wasn’t until my career in the NHL with the St. Louis Blues [that] I realized the importance of advocacy and education when it comes to making a change in the lives of those we care so deeply about. Now, with over 500 games in the NHL and two Olympic appearances, we have founded a charity to unite other athletes with a passion for rescuing and helping animals.

“My wife Kelly and I share our home with six rescued animal companions, four dogs and two cats, all with incredibly unique backgrounds but undeniably capable of giving and receiving unconditional love. For the past decade, we have been able to join forces with many incredible animal organizations, and most recently visited Best Friends Animal Sanctuary in Kanab. We were amazed at the incredible work being done and are proud to be supporters of an organization that is paving the way to better the lives of humans and animals.

“We believe the difference we can make when we collaborate is limitless; we have the power to educate people everywhere and positively change the lives of animals.”

Going for gold in the Olympics

David has played a key role in all three American hockey victories, scoring two goals in the tournament, one in the 5-1 win over Slovenia earlier this week, and a second in today’s win over the Czech Republic. Best Friends sends our best wishes for success to David as he and the rest of the Olympic team go for a medal this weekend. In fact we are going to be naming the next 25 puppies and kittens that arrive at the Sanctuary after the 25 members of the USA Olympic hockey team.

Read more about David’s work on behalf of animals.