Image
Melanie and John Dutcher, a married couple, have turned their trips to Best Friends Animal Sanctuary to volunteer with dogs into a regular getaway.
By Christelle L. Del Prete

Like many of the volunteers who travel to the Sanctuary to spend time with the animals who live here, Melanie and John Dutcher have turned the trip into a regular getaway. Last December, they returned to the Sanctuary from Salt Lake City for the third year in a row. It may be cold in Southern Utah in the winter, but they don’t mind; it’s their favorite time of the year to volunteer. Though they have spent time in Horse Haven and Cat World, Melanie and John consider themselves dog people. So it makes sense that their favorite place to volunteer is Dogtown. During their recent trip, in addition to their regular volunteer duties of walking, socializing, and cleaning up after dogs, they agreed to do something extra special for one of them. 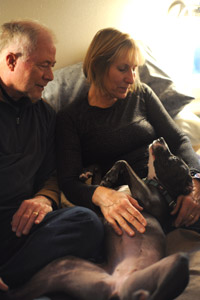 Going the extra mile for animals

Because Best Friends works across the country to help animals, there’s a constant need to just get pets from one place to another. Volunteers play an essential role by simply giving pets a ride when they need one. When Saydi, a young, friendly pit bull terrier, found herself in need of a ride up to the Best Friends Pet Adoption Center in Salt Lake City, the folks at the Sanctuary volunteer department reached out to the Dutchers. Of course, Melanie and John said they’d be happy to accommodate sweet Saydi on their drive home; the animal-loving couple takes pride in making themselves useful, and going the extra mile seems to come naturally for both of them. On a previous trip to the Sanctuary, they drove a cat down from Salt Lake City and then took another one back up with them.

For the past 10 years, Melanie and John have also raised puppies for Canine Companions for Independence, a nonprofit organization that trains service dogs for people with developmental and physical disabilities. People often ask Melanie and John if it’s hard to give up the adorable pups, like their current charge, Diamond, when their training period is over. But the Dutchers are so dedicated to the cause that it’s become a labor of love for them. Still, Melanie says it would be nice to add a permanent family member to their household. She and John hope to adopt a Sanctuary dog someday. 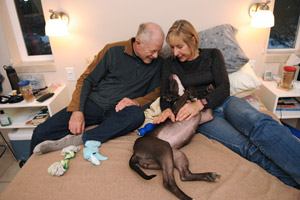 For now, the couple enjoys interacting with animals through what John calls habitual, or career, volunteerism. They particularly cherish the time they can spend with dogs like Wallie, an adorable white pit bull terrier mix with gray patches, who came to Best Friends from Kanab Animal Control. For Melanie, meeting dogs like him, and learning about their background and behavior, is the highlight of these trips.

But John also points out interacting with Best Friends staff adds a whole other dimension to their experience. “When we first came (to the Sanctuary),” Melanie says, “we were overwhelmed by the quality of care each individual animal is given, and the sincerity and passion of everyone who works here.” She and John were particularly impressed by the kindness of the caregiver in Dogtown Heights who brought them tea and chocolate during one of their volunteer shifts.

A haven for humans

It’s that experience – making a difference, meeting great dogs, and having positive interactions with Best Friends staffers – that makes the Sanctuary not only one of the Dutchers’ favorite places, but, in Melanie’s words, “a very refreshing place to be … a haven for humans as well as rabbits and cats and dogs.” That, coupled with their generous and giving spirit, inspires volunteers like Melanie and John to extend their kindness beyond the Sanctuary. Sometimes it’s as simple as giving a dog like Saydi a ride to the next chapter in her life.

Get more information about volunteering at the Sanctuary or donating to help the animals.