What do Glacier National Park, Death Valley, the Rocky Mountains and Best Friends Animal Sanctuary have in common? They’re all among the stops made by Vince and Kylee Noga, who quit their jobs in Boston to spend more than a year traveling around the country.

Kylee fell in love with Best Friends from afar through Best Friends magazine, dreaming that one day she might visit.. So when she and her husband decided to buy a camper and spend 15 months traveling the United States, she knew the Sanctuary would be on their itinerary. Ten months into the trip, they finally arrived.

Kylee and Vince wanted to make the most of their trip, so they signed up to volunteer in several animal care areas. However, given their love for felines, they had a soft spot in their hearts for the residents of Cat World.

Among the many cats they met, a shy guy named Ira stood out. Normally tentative around people, Ira came right up to Kylee and snuggled in, even allowing her to pick him up. That came as a surprise to one of his caregivers, who had never seen Ira connect with someone in that way. There was such a connection that Kylee asked if she could take Ira on a sleepover. Though he’d never been on one before, this was the perfect opportunity.

Not surprisingly, Ira was initially timid and hid under the bunk. He adapted quickly, though, and was soon up on the couch making biscuits (kneading with his paws), as Kylee rubbed his belly.

“He ended up sleeping right alongside my body under the covers,” says Kylee. “That was so sweet.”

That one-on-one bonding time proved to be extra beneficial for Ira. Now that he’d discovered the joys of people through Kylee, he soon found a home of his own. 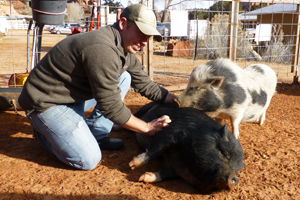 As much as they loved the cats, Kylee and Vince enjoyed the pigs even more. That came as a complete surprise, since neither of them had any prior piggy experience.

Feeding time benefited Kylee and Vince just as much as the pigs because mealtime for the pigs turned out to be exercise time for the humans. With roughly 20 feeding troughs, the feeding routine requires caregivers to run beside the troughs and throw in scoops of food before the pigs catch up. When one trough is filled, the pigs rush to the next, just in case a tastier treat should appear. Who needs a treadmill when you can feed pigs?

Volunteering at Piggy Paradise slowed down considerably after breakfast. That’s when Vince did a little connecting of his own when he discovered that Ariel loves belly rubs. He never would have guessed a pig weighing several hundred pounds had such a soft spot.

“It was really entertaining and informative, too,” says Vince.” We never had such an appreciation for pigs.”

The couple’s experience at the Sanctuary proved to be so enjoyable and gratifying that they doubled their stay from five to 10 days. However, all good things must come to an end. Though it was difficult to leave, they resumed their journey, which will conclude in May.

The spirit of Best Friends will remain with them, however, as they start their lives afresh in New Hampshire. “It has definitely inspired both of us to volunteer at a local rescue group once we’re back and settled,” says Kylee.