The second annual Best Friends pet super adoption in St. George, Utah, kicked off at noon on Friday, April 26. Including Best Friends, the two-day event brought together 14 shelter and rescue groups and a total of 220 adorable animals for an adoption extravaganza.

Sponsored in part by PetSmart Charities® and Petfinder, the event, held in a large, enclosed area near the entrance of the PetSmart store, was sure to be a success. As potential adopters streamed through the gates, volunteers greeted them enthusiastically. Inside, people enjoyed a festival-like atmosphere and the chance to meet a beloved new family member. 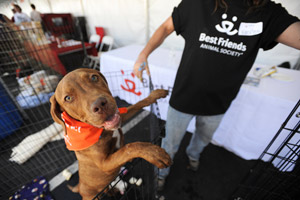 Groups in attendance included the Hurricane Animal Shelter, who brought along dogs like Echo, a shepherd mix who had once been a stray. The handsome Echo was quickly spoken for, and LeAnn Sawyer, a shelter volunteer, was hopeful that Maggie, a sweet, blind poodle, would be the next to find a good home.

P.A.W.S. (Providing Animals with Support), a nonprofit rescue organization based in St. George, also had a large presence and some outstanding volunteers, including 11-year-old Cya, who was working in the cat adoption tent with her mother, Heidi. The mother-daughter team, who have four cats of their own, have been volunteering with P.A.W.S for several months, and their passion and excitement were palpable.

While Heidi helped someone fill out adoption paperwork for India, a beautiful silver and white tabby cat, Cya cradled a sleeping kitten on her shoulder and chatted excitedly about the featured adoptables. Her favorite was Amanda, a longhaired tortoiseshell cat, whom she described as really soft and playful. But it was a large gray tabby named Fish that Cya really wanted to see get adopted. "He's really scared," Cya explained, "and he needs someone special to bond with."

While Cya and her mother promoted the P.A.W.S cats, volunteer Jenny Elder was outside helping H.A.R.T. (Homeless Animal Rescue Team). In her professional life, Jenny is a quality assurance manager for a company in Las Vegas. It's a job that keeps her pretty busy, though she likes to help animals in whatever spare time she has. She has volunteered at the Sanctuary before, and was truly excited to be at her first super adoption event. 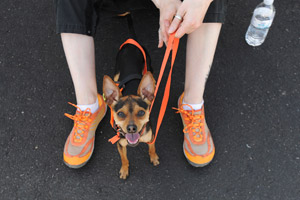 But, as amazing as all of the volunteers were, the animals kept stealing the show. Sonny, a very large pit bull terrier mix from Salt Lake County Animal Services, turned heads wherever he went, although the gentle giant was more interested in hanging out in the shade than strutting his stuff in the spotlight. Paco, a sprightly miniature pinscher mix, had taken the four-and-a-half-hour drive down to the event with Davis County Animal Care and Control. In his orange "Adopt Me" vest and matching leash, Paco eagerly ran around the venue, greeting everyone he met.

And Perry, a sweet, middle-aged pug mix, who, like Echo, had been a stray, lumbered up and down the "runway" until the stars aligned, and a woman in a green dress followed him back to the Davis County tent to fill out adoption paperwork. In all, 137 animals like India, Amanda, Paco and Perry were adopted during the two-day event, along with approximately 360 at the New York Super Adoption, which took place the same weekend. But Best Friends isn't stopping there. More super adoption events are planned for May  - one in Los Angeles and another in Salt Lake City - two more fantastic chances to save lives by bringing people and pets together.

To learn more about Best Friends pet super adoptions or to volunteer at one, click here.